Nzechukwu Hopes To Bring A Victory Home To Mom

Fans of Dana White’s Tuesday Night Contender Series may remember the name Kennedy Nzechukwu because the light heavyweight prospect fighting out of Fortis MMA appeared on both the first and second seasons of the summer talent search.

In season one, Nzechukwu defeated former TUF contestant Anton Berzin, however, he was still too raw, too inexperienced to merit a contract offer. But after a pair of stoppage wins on the regional circuit, he returned for season two, collecting a first-round head-kick victory over Dennis Bryant and a UFC contract for his efforts.

In that regard, the 26-year-old’s story isn’t much different than any of the other prospects who graduated from the Contender Series or who earned a promotion to the biggest stage in the sport by piling up impressive performances on the regional circuit. 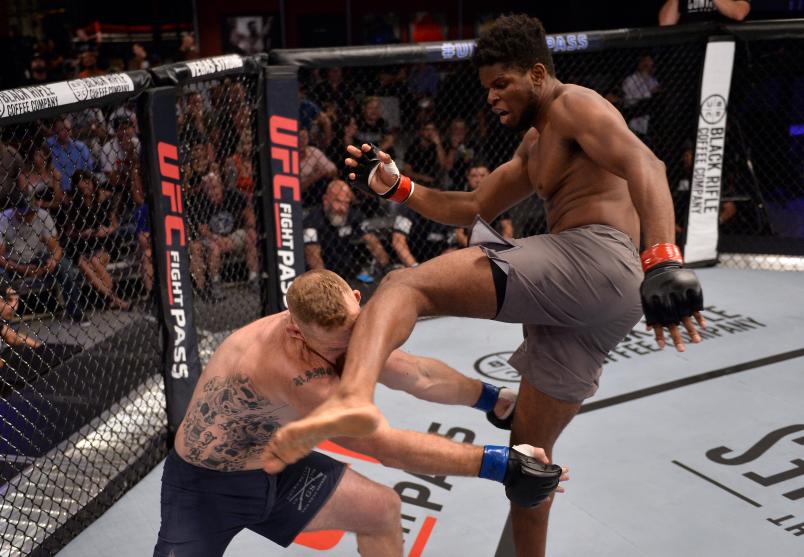 But that is where the familiar narratives end.

Nzechukwu and his family moved to the United States from Nigeria in 2010.

“His mom was the first one that brought him to the gym,” says Sayif Saud, the head coach at Fortis MMA in Dallas, Texas, where Nzechukwu trains. “Kennedy is a six-foot-four, giant kid and came in as a teenager and his mom is this little lady — maybe five-foot-two; tiny, but powerful — and she came in and said, ‘This is my son. I want him to get trained and get some discipline.’

“She would sit on the bench and then, she still had the physical capacity to sit and move and stand and she would watch him. When he would do something well, he would look at her for encouragement and when he did something bad, she would look at him like, ‘You need to be tougher than that.’

“Shortly thereafter, those visits stopped and her situation continued to deteriorate and as that happened, you could just see this cloud of pain over this kid’s face.”

In the years since her diagnosis, the degenerative disease has robbed her of the ability to move much more than her head and prompted her son to take on the role as her primary caregiver. He also cares for his siblings, including a brother who is on the Autism spectrum, and he attempts to balance it all with pursuing a career in the UFC.

Fighting is a selfish sport that requires an intense amount of focus and commitment, where single-mindedness is often a prerequisite for chasing greatness and fighters are often making the choice to give up just about everything else in order to concentrate on their craft with maniacal focus.

But for Nzechukwu, life has dictated that he take on even greater responsibilities and wrestle with life-altering challenges, paying the physical and emotional toll that goes with it, all while training alongside a small, but talented collection of killers all pushing towards the same dream of achieving greatness on the biggest stage in the sport.

"There are some times he comes into practice and he’s a minute late or whatever and I say, ‘Dang it, Kennedy!’ and he looks at me with a certain look in his eyes that says, ‘You don’t know what I just got done doing,’” says Saud, who has graduated a number of fighters to the UFC through the Contender Series and whose Fortis MMA team has been posting tremendous results inside the Octagon over the last two years.

“These are the struggles that he fights through and that can’t be understated,” he adds. “He’s dealing with something that is painful and he’s got to not only work through that, but he’s got to be in charge of that situation.

“He’s got to find the right medicine. He’s got to take her to the doctor. He has to pick his sister up and make sure she’s where she needs to be. He’s got to be responsible for all these different things and yet here he is trying to have this career.”

This weekend, Nzechukwu will make his first foray into the Octagon when he squares off with Paul Craig on the main card of the UFC’s return to Philadelphia on Saturday night. Making the walk to the UFC cage for the first time is a major milestone for any aspiring fighter, but the fact that he’ll do so with his mother watching from home is something the light heavyweight prospect didn’t think would happen.

“God has kept her alive up to now and I thank God for that because this disease, people don’t usually last two years,” says Nzechukwu, who carries a perfect 6-0 record into his showdown with the Scottish submission specialist this weekend. “She’s been here to see my rise and my career progress from amateurs to the UFC and I can’t wait for her to see my first victory in the Octagon.

But getting a victory to share with his mother this weekend in Philadelphia is only Step One in Nzechukwu’s greater plan.

Although chasing championship gold and eventually getting the UFC light heavyweight title wrapped around his waist is definitely one of the items on the talented newcomer’s personal “to do” list, Nzewchuku sees fighting as a means to do something much greater.

“My goal is not just to win the belt in the UFC — it’s to use that platform to help people who suffer with this disease my mother is dealing with, and my oldest brother has Autism, so I’m the primary caregiver for both of them. I want to use my platform to push towards (making things better for people and bringing attention to those issues).

“At the end of the day, we’re all human beings and we’re meant to support one another,” he continues. "So when I fight, it’s great and I do want to win and I am going to win and one day, I will win that belt, but I want to use this platform to help push towards those things that I mentioned because I know that I have this passion of helping people and I’m good at it. You can’t deny what you’re good at and I’ve been blessed to speak with people and help people and those are the things I find joy in. 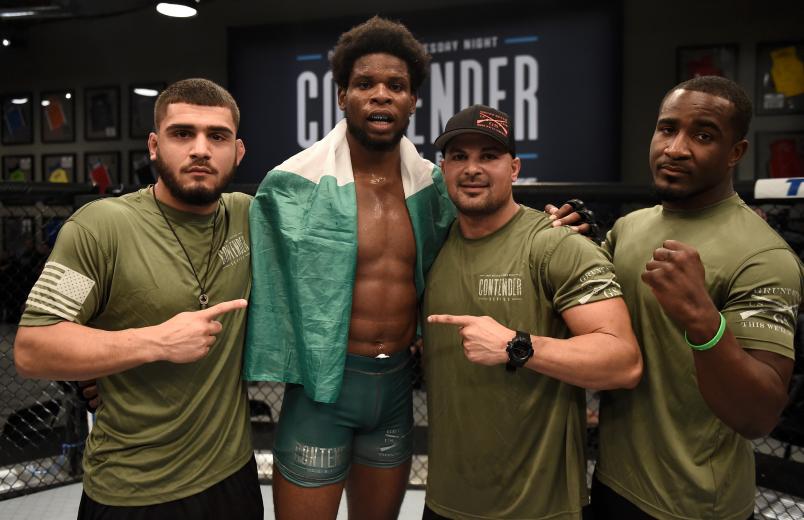 LAS VEGAS, NV - AUGUST 22: Kennedy Nzechukwu poses with his team after his split-decision victory over Anton Berzin of Ukraine in their light heavyweight bout during Dana White's Tuesday Night Contender Series at the TUF Gym on August 22, 2017 in Las Vegas, Nevada. (Photo by Brandon Magnus/DWTNCS)

LAS VEGAS, NV - AUGUST 22: Kennedy Nzechukwu poses with his team after his split-decision victory over Anton Berzin of Ukraine in their light heavyweight bout during Dana White's Tuesday Night Contender Series at the TUF Gym on August 22, 2017 in Las Vega

And rather than be weighed down by the myriad challenges life has thrown at him and his family, Nzechukwu uses everything his mother and brother are going through and the challenges that others in similar situations face and those who struggle in general as fuel to push him through those grueling workouts when giving up would be a much less difficult option.

“When I’m exhausted and defeated in practice, I always have those people in the back of my mind,” he says. “Because if I want to do this for these people, I can’t give up on myself and the work that I’m doing at my job, which is fighting.

For his coach, the fact that Nzechukwu has been reticent to speak about his mother’s health issues and his life outside the cage only further underscores why his young charge is someone fight fans should rally behind as he readies to make the walk to the Octagon for the first time this weekend.

“He asks me, ‘Coach, should I talk about my story?’ and I say, ‘Absolutely. Speak freely because we have never used this, ever’ and that is more impressive to me,” explains Saud. “We took this kid to the Contender Series twice and we never got on a soapbox, we never went to Dana.

“When he didn’t make it, we went back (to the regional circuit), got two wins and then got a head-kick knockout. There is something to be said about that. We didn’t try to sell this kid using this story, but now it’s coming out and it’s a great story about a kid who is fighting for all the right things.”

At the same time, Nzechukwu has the potential to be a force in the currently in flux light heavyweight division as well.

Blessed with tremendous height and long limbs, the 26-year-old boasts a frame comparable to Jon Jones when he first arrived the UFC as a fresh-faced twenty-something throwing spinning back elbows and, as his early efforts indicate, the Fortis MMA product has both the power and instincts to finish fights when the opportunity presents itself.

In Craig, Nzechukwu gets a stern test right out the gate as the 31-year-old Scotsman has more than twice as many fights under his belt, including a pair of victories under the UFC banner from five trips into the Octagon.

He is the most talented and accomplished fighter Nzechukwu has faced to date, though the newcomer doesn’t foresee any reason why he should struggle on Saturday night at Wells Fargo Center.

“I think I match up great with him,” he says of his first UFC assignment. “If I can’t beat Paul Craig, I shouldn’t be in this organization. I know this is a crazy sport — unpredictable and unforgiving and anything can happen — but he’s a great matchup for me to start off my UFC career and I’m ready to go in there and perform.

“With my pressure and everything we’ve worked on, I think it should end in the first round. If not, the second round.”

If he does emerge victorious, Nzechukwu will be elated that his mother was able to see it happen and excited to have accomplished another goal, but he’ll be far from satisfied.

“It’ll be awesome,” he says of winning on Saturday night. “I’ll be so happy, but I won’t be satisfied until I get that belt and achieve my mission in life of helping the people I want to help, so this is just a start. It’s just an entry in my journal and I still have a long way to go.

“Fighting is great and everything, but in this world, until I take my last breath and go into the dust, I want to make sure I make a huge influence in kids’ lives, especially kids growing up with disabilities. I always wanted to make a charity that helps people with disabilities and that are poverty stricken. That’s my mission and goal in life.”

“I’ve wanted to see him blossom and do as much as he can while his mom is still around,” adds Saud, who doesn’t take it easy on his young protégé, but has learned to read the looks Nzechukwu gives him in those moments where his coach is on him hard in training.

“He’s not sensitive to it, but he doesn’t use it,” reiterates his coach. “You didn’t even know. It’s probably worse than you can imagine, to be honest.

“But that’s why it’s important to share his story and for people to root for this guy.”