For a lot of MMA fighters, martial arts are a way of channeling excess energy they had when they were kids. Bantamweight challenger Amanda Nunes, who fights Miesha Tate in the main event of UFC 200, fits that group.

The youngest of three sisters, Amanda lived as the only child at home when the two older girls left Pojuca, Brazil, in Bahia, to study and work in the capital Salvador. But after some time the girls’ mother, Mrs. Ivete, called Valdirene, the oldest, and said: “Come pick your sister because I can’t stand this anymore.” 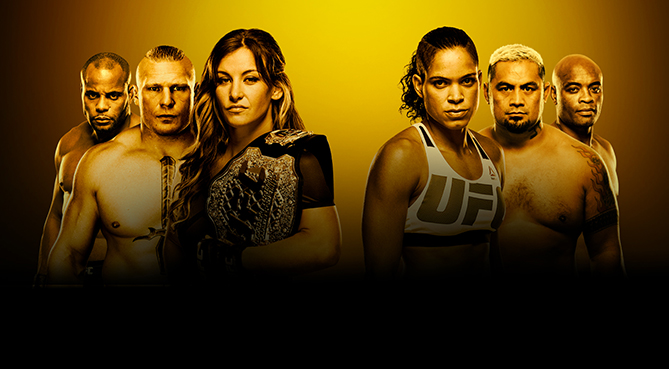 But what is it a young Amanda could have done for her mother to feel this way?

"When we went to Salvador, she was the only kid left at home, so she had my stuff and our sister Vanessa’s. One day, my mother came home to find Amanda bathing a mare (female horse) in the backyard,” Valdirene recalls with a laugh. "Amanda took my bike, her videogame and R$ 20 and exchanged everything for the mare! She walked the mare inside the house to take it to the backyard. My mother ordered her to give it back, but the previous owner didn’t want it. She kept the mare for a while, but traded it for something else later."

In Salvador, Nunes was presented to Team Carvalho by her sister Vanessa, and as Valdirene remembers, "it was love at first sight.” The soon to be “Lioness”, 15 years old at the time, had already trained jiu-jitsu and capoeira while engaging in boxing and karate in her town, and soon showed that she had a natural talent for martial arts.

"She had a great desire to practice, a lot of energy. We just used her gift,” recalls Ricardo Carvalho, Nunes' first coach. "My brother Edson Carvalho and I fought vale-tudo, so we have the experience of observing the athletes. Amanda was industrious, liked to train, and that made us happy. Many athletes have the gift and do not like to train, but not only she liked it, she needed it, so we chose to support her. We knew she would follow a professional career when we saw her on the mat. "

Nunes’ dedication was such that the fighter decided to live in the gym for about three months to optimize her training, and had the help of teammates to stay in the sport. After getting to a record of five wins and one loss, it was time to make her debut in the United States.

Going to New Jersey with Edson Carvalho, Nunes debuted in Strikeforce with a 14-second knockout over Julia Budd, and that was the kickoff of a successful career in MMA. The "Lioness" was the first Brazilian hired by the UFC when the bantamweight female division was created, and also holds the distinction of being the first Brazilian female to win in the Octagon.

After training at Edson Carvalho’s and MMA Masters, Nunes has settled at American Top Team in Coconut Creek, Fla. since 2014. Her main coach, Conan Silveira, explains what differentiates Nunes from other athletes.

"I was part of the Carlson Gracie Team, and Carlson never said that being good only in jiu-jitsu would make you the best,” Silveira says. "You must be complete, and that's where Amanda fits. What differentiates her from other athletes is that she is good at everything she does. She knows how to combine things in MMA. Usually a fighter has a background in one discipline, but Amanda doesn’t. Everything is background for her”.

"What differentiates her from other athletes is that she is good at everything she does. She knows how to combine things in MMA. Usually a fighter has a background in one discipline, but Amanda doesn’t. Everything is background for her.” -- coach Conan Silveira

It is clear that Nunes has plenty of talent, and devotes much of her time to be the world's best, but her gift and persistence are not the only basis in the sport. Fighting literally runs in Nunes' blood.

"My mother had a brother, now deceased, who fought in vale-tudo”, says Valdirene, talking about José Alves, also known as the “Indian.”

Says Valdirene, "We have a black and white picture of him fighting in a time when slapping your opponent was permitted, and my mother used to corner his fights. I think really runs in the blood, because Amanda did not get to see my uncle fighting. It’s “a blood thing."

And on this path of blood and sweat, Nunes is about to make history in the UFC. After several twists and turns that have marked the International Fight Week, the lively girl from Bahia will lead one of the biggest UFC events of all time, and might add another notch to her resume: the first Brazilian bantamweight champion.