Nunes ready to carry the division's torch for a long time

There is no easy formula to follow when it comes to a fighter reaching his or her full potential inside the Octagon.

Some are preternaturally gifted and take to the sport like a duck takes to water, their ability to do incredible things inside the cage seemingly ingrained in the fibers of their being, allowing them to make something exceptionally difficult look rudimentary. Some are obvious “heart and hustle” creatures – competitors who make the absolute most of their skills and climb to the greatest heights imaginable because they’re willing to push themselves just a little further, a little harder than everyone else.

Most fall somewhere in between.

On top of skill and drive, natural gifts and those forged through hard work and sweat, there are external factors – relationships, financial concerns, a finite number of hours in the day – that must be considered, not to mention the importance of finding a gym and a collection of coaches that can help develop and dial in an athlete’s skills.

Becoming an elite fighter is a trial and error process without any guarantees – one that often takes longer than anticipated – and can come together when you least expect it.

Looking at the 28-year-old Brazilian’s career, it can be split into three clear segments: her meteoric rise as a prospect, a run of inconsistency as the competition got tougher, and the part where everything has started to click.

That’s where she’s at now, having won four consecutive straight contests, culminating with a stunning submission win over Miesha Tate in the main event of UFC 200 in July where she became the fourth woman to hold the UFC women’s 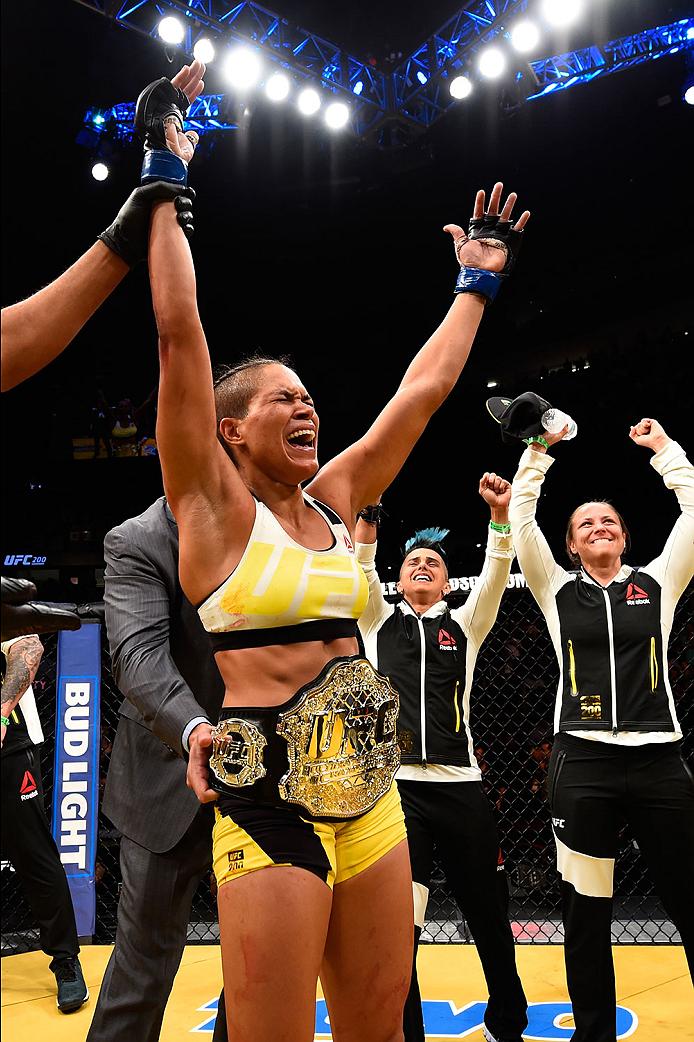 bantamweight title, and she plans on staying here for quite some time.

“I’ve been in this sport for so long – up and down – and a couple times, I reached the Top 5 and I never fought for the belt,” began Nunes, discussing her ascension to the top of the division and why she believes she’ll be the first woman to successfully defend the title this year when she takes on former champion Ronda Rousey in the main event of UFC 207 this Friday in Las Vegas.

“Always when I win before, I have three or four straight wins and (when I got a No. 1 contender fight), I lost. I had to fix a lot of things – switch gyms, fix a lot of personal things – and when I fixed everything and I started winning and building my record, everything came together.”

Nunes’ rise to the top of the division coincides with a switch to American Top Team and a change in approach outside of the gym spurred on by her girlfriend of four years, UFC strawweight Nina Ansaroff.

While she remains a tireless worker with an insatiable thirst for knowledge and desire to learn in the gym, Nunes is no longer bringing that same obsession with her craft home with her. She’s learned to make more time for herself, for Ansaroff and for her family and friends and it has resulted in the best string of performances in her career.

“Everything in my life now has come together,” Nunes said. “I’m a better person, I have my girlfriend with me and my sister with me – things that I didn’t have with me before to help me build my career and help to move forward. When you have everything together like that, you can go through everything happening in life.

“Since I met Nina and I have my sister here with me, everything has been amazing. They make everything easy for me. Nina is my main training partner and we pretty much do everything together and I love all the energy my sister brings to me. She helped me a lot to get here before and now she’s here with me in America. These two together make me another level athlete.”

As both Holly Holm and Miesha Tate found out this year, climbing to the top of the division is one thing, but staying there is an entirely different challenge and now Nunes is seeking to do what the last two champions could not – defend the title – and she gets the opportunity to cement herself as the best in the division against the woman who ushered the weight class into the UFC just under four years ago.

And “The Lioness” wouldn’t have it any other way.

“I feel like I haven’t shown everything yet,” Nunes admitted. “I like to kick and I haven’t had an opportunity yet to show my kicks, I haven’t shown my jiu-jitsu enough. Those things, I still have to show people and show I have it.

“I will win this fight.”