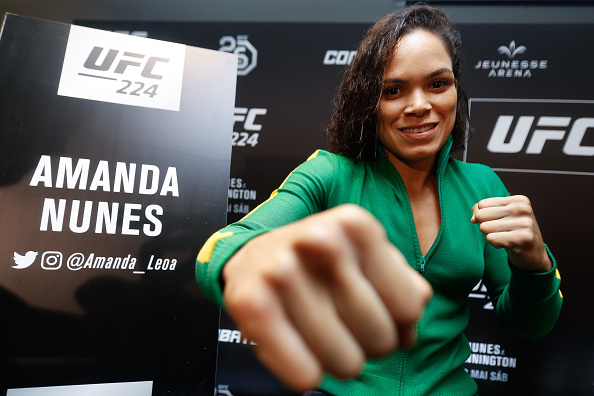 Professionally speaking, Amanda Nunes’ greatest dream came true on July 9, 2016 when she stormed through Miesha Tate in the main event of UFC 200 to become the first Brazilian female to wear championship gold in the UFC.

This weekend, the reigning, defending and undisputed women’s bantamweight champion gets to cross her next biggest dream off her wish list as she returns to her home country to defend her title against Raquel Pennington in the main event of UFC 224.

“My first dream was to become champion and my second one was to bring the belt home to my country and defend it in front of my family and friends,” said Nunes, who has successfully defended her title on two occasions since toppling Tate nearly two years ago. “I’m very happy the UFC is giving me this opportunity. It definitely means a lot.”

The champion enters Saturday’s showdown with Pennington on a six-fight winning streak and is coming off arguably the most critical performance of her career – a split decision victory over Valentina Shevchenko last September in Edmonton, Alberta, Canada.

The two had met 18 months earlier in Las Vegas, with Nunes racing out to an early lead before Shevchenko rallied in the third. “The Lioness” took home the victory, but many that watched the fight believed the momentum was moving in Shevchenko’s favor and if it had been a five-round affair, the outcome may have been different.

UFC 215 would be the opportunity to test that hypothesis and while the two once again engaged in a close, heated contest, Nunes emerged victorious once again, proving some things to herself in the process while continuing to prove her critics wrong.

“I proved in that fight that I could go five rounds because a lot of people talk about that,” she said. “I proved everybody wrong, like always. I always prove people wrong. This makes me motivated to keep moving forward. I love that. This is a challenge for me; keep pushing myself and my limits every day. I love those challenges. That’s why I’m here.”

Despite all of her recent success and current standing atop the bantamweight division, Nunes has been forced to deal with a fair amount of criticism and questioning during the course of her title reign.
MORE FROM UFC 224: UFC 224 Countdown - Nunes vs Pennington | Embedded Ep. 5 | Open Workout Highlights | Free Fights: Nunes vs Rousey | Pennington vs Evans-Smith

Whether it has been people revising history to minimize the significance and sheer brilliance of her first-round finishes of Tate and Ronda Rousey or those who continue to criticize her for withdrawing from her scheduled rematch with Shevchenko at UFC 213 the morning of the bout, the 29-year-old champion hasn’t exactly been lauded for her achievements, but she intends to force her detractors to give her the respect she’s due by putting on a show this weekend against Pennington.

“People can say whatever they want,” she said of her critics. “If you’re good, if you’re bad, people still talk s*** about you. This is the world. This is social media. But at the end of the day, the money is going into my account and I am the champion. I have my life set up for the rest of my life to live happily with my family and my girlfriend.

“I really don’t care about that. I only care about stepping into the cage and defending my belt, (continuing to make) money and keep getting better for myself.

“Definitely this fight I’m going to make a statement,” she added. “I’m going to prove I’m better, prove I’m here for a reason, prove I’m getting better and better, evolving each fight. I’m very excited because Rocky is a good opponent – she’s a tough opponent and we can put on a good show for the fans. This is going to be very exciting.”

While her last outing was a grudge match of sorts, Saturday’s contest comes with no pre-fight animosity. Nunes and Pennington are friends, having formed a relationship through Pennington’s fiancée, Tecia Torres, who previously trained alongside Nunes and her long-time girlfriend Nina Ansaroff at American Top Team in Coconut Creek, Florida.

Though some fighters thrive off having tension with their opponents and will go so far as to manufacture friction in the weeks leading up to their meeting just to have a little something extra to help push them in the gym, Nunes doesn’t need any of that because there is something far more meaningful motivating her at this point in her career.

“A fight is always a fight. If it’s a rival or a friend, you have to step in and fight and get the job done,” said Nunes. “The thing that motivates me is the belt. I want to keep my belt. It can be a friend in front of me, it can be my girlfriend in front of me.”

She’s not being hyperbolic either.

“I talked to Nina the other day (and said), ‘If you come up to 135 we’re going to fight.’ It can be my girlfriend in front of me and I’d want to kick her ass and nothing is going to change that because I want to keep my belt at home with me.”

Which is precisely what she intends to do this weekend, no matter what.

“My hand will be raised for sure. I feel like whatever happens this fight, I will walk away with my belt.