By The Numbers: UFN Jaragua 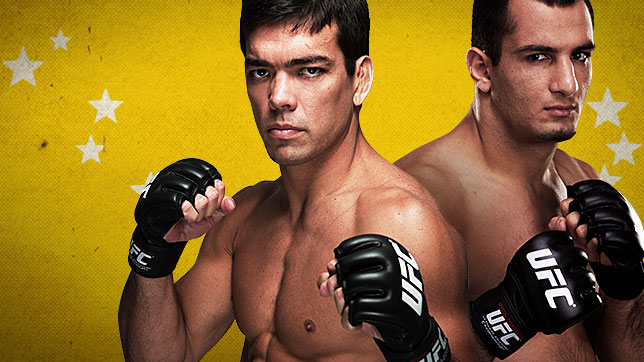 The Octagon lands in Jaragua do Sul, Brazil this Saturday for UFC Fight Night: Machida vs. Mousasi. Read on to see how this card breaks down By The Numbers.

3:10
Length it took for “The Dragon” to knock out Mark Munoz with a head kick in Machida’s middleweight debut at UFC Fight Night: Machida vs. Munoz in October

12
Knockdowns in Machida’s UFC career, 4th most in UFC history

80
Percentage of Machida’s KO wins in the UFC that have been awarded Knockout of the Night bonuses - Thiago Silva, Rashad Evans, Randy Couture, and Munoz

65
Percentage of takedown attempts that were successful for Machida in the UFC at 205 pounds, highest in the division’s history

17
Age when Mousasi made his pro MMA debut

15
Fight winning streak, which was the longest in Mousasi’s career

29
Finishes Mousasi has in 34 victories

26
In the first round

0
Times that Mousasi has lost via KO/TKO

14
Submission wins for Souza, 12 in the first round

2.09
Submission attempts per 15 minutes for “Jacare”

5
Fight win streak for “Jacare,” all by finish

9:34
Length in minutes “Jacare” has fought inside the Octagon in his 3 first round finishes - submitted Ed Herman in Souza’s debut,  Submission of the Night over Chris Camozzi, and TKO of Yushin Okami

1.3
Significant strikes absorbed per minute of fighting for Carmont, eighth lowest rate of any fighter in UFC history with at least five UFC bouts

100
Percentage of Erick Silva’s wins in the UFC by first round stoppage (2 submission, 1 KO)

4:59
Average fight time for Silva in the UFC, shortest among active fighters

32
Fight career for Takenori Sato, who is making his UFC debut against Erick Silva

3:07
Time it took Musoke to secure an armbar victory on Sakara, the fifth sub stoppage of Nico’s career

7
Fight win streak for Viscardi Andrade with 5 finishes in a row (2 sub, 3 KO/TKO)

4
Different submissions were used by “Do Bronx” to earn those UFC wins - armbar, standing rear naked choke, reverse calf-slicer (only one in UFC history), and anaconda choke