By The Numbers: UFN Dublin

Breaking down Saturday’s UFC Fight Night: McGregor vs. Brandao card By The Numbers... 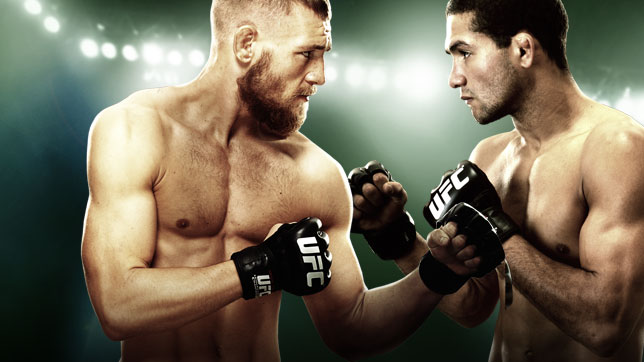 On Saturday, the Octagon is in Dublin, Ireland for the featherweight meeting between Conor McGregor and Diego Brandao. But before UFC Fight Night begins, let’s take a look at the card By The Numbers.

336
Days it will have been since Dublin’s own “The Notorious” Conor McGregor last fought inside the Octagon at UFC Fight Night: Shogun vs. Sonnen where McGregor earned a unanimous decision over Max Holloway

13
Current UFC ranking for McGregor in the featherweight division

67
Seconds it took for McGregor to defeat Marcus Brimage at UFC on Fuel TV: Mousasi vs. Latifi, 3rd fastest debut by a UFC featherweight behind Pablo Garza’s 51 seconds and Tiequn Zhang’s 48 seconds

10
First round finishes for “The Notorious”

4.59
Significant strikes per minute for McGregor in his 2 Octagon performances, UFC average is 2.61

73
Percentage for striking defense for McGregor, UFC average is 58%

6.07
Max Holloway’s significant strikes landed per minute rate prior to his bout against McGregor

1.53
Significant strikes landed per minute by Holloway against McGregor

80
Takedown accuracy by “The Notorious” against Holloway, plus 6 guard passes for McGregor

8
Takedowns for Brandao against Daniel Pineda at UFC Fight Night: Shogun vs. Sonnen, tied for 4th most ever in a UFC/WEC featherweight fight

14
Season of The Ultimate Fighter Brandao won by submitting Bermudez in the first round, which was awarded Fight of the Night and Submission of the Night bonuses

5
Submission wins in Brandao’s career including his most recent sub win over Pablo Garza at UFC on Fuel TV: Mousasi vs. Latifi

11
First round finishes for Brandao in his career

13
Current UFC ranking for Gunnar Nelson in the welterweight division

900
Approximate distance in miles between Nelson’s native Iceland and Ireland where he splits his time training at the Mjolnir gym in Iceland and with McGregor, Coach John Kavanagh, and the Straight Blast Gym in Ireland

3
Fight win streak for Nelson inside the Octagon, tied for 4th longest streak in the UFC welterweight division behind Dong Hyun Kim and Ryan LaFlare’s 4, and Matt Brown’s 7

385
Days Nelson was out between his unanimous decision win over Jorge Santiago at UFC on Fuel TV: Barao vs. McDonald and his most recent win over Omari Akhmedov at UFC Fight Night: Gustafsson vs. Manuwa

1
Punch was thrown/landed at distance by “Gunni” against Akhmedov, which led straight to the takedown that spelled the end of the fight a couple minutes later via guillotine choke

12
Fighters in UFC history have won via D’arce choke including Zak Cummings who secured his submission in his Octagon debut in the first round against Ben Alloway at UFC Fight Night: Condit vs. Kampmann 2 earning him a Submission of the Night bonus

9
Submission wins for Cummings in his pro career

125
Pounds aka flyweight division where Brad “One Punch” Pickett successfully made his debut with a unanimous decision at UFC Fight Night: Gustafsson vs. Manuwa

4
Fight of the Night bonuses for “One Punch” inside the Octagon against Michael McDonald, Mike Easton, Yves Jabouin, and former UFC bantamweight champion Renan Barao

10
Takedowns scored by Pickett against “Mighty Mouse” in their lone clash, tied for most successful takedowns in a UFC/WEC bantamweight bout

43
Leg kicks landed by “Uncle Creepy” in his bout against Santos, most in UFC flyweight history

85
Takedown defense percentage for McCall in his 4 UFC bouts, stuffed 17 of 20 attempts

3
Wins in the UFC for “Stormin’” Norman Parke including winning The Ultimate Fighter: Smashes season in the lightweight division