By The Numbers: UFN Brasilia

Breaking down Saturday’s UFC Fight Night: Bigfoot vs. Arlovski card By The Numbers... 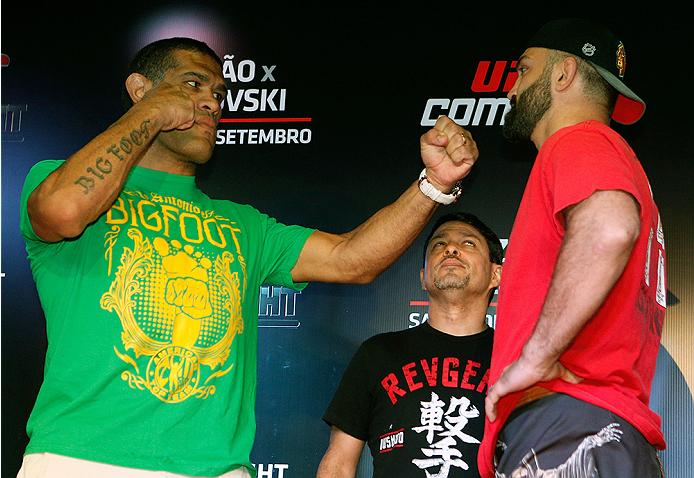 On Saturday, the Octagon is in Brasilia, Brazil for the heavyweight rematch between Antonio "Bigfoot" Silva and Andrei Arlovski. But before UFC Fight Night begins, let’s take a look at the card By The Numbers.

4
UFC events held in Brazil in 2014 including this Saturday’s UFC Fight Night: Silva vs. Arlovski

4
Current ranking of Bigfoot as a UFC heavyweight

2:23
Time into the first round Silva scored a knockdown against the famously granite-chinned Hunt

-30
Significant strikes deficit for Silva against Overeem, 3rd largest sig. strike deficit to overcome to win in the UFC heavyweight division behind Brock Lesnar’s -32 at UFC 116 and Mike Russow’s -37 at UFC 114

12
First round finishes by Bigfoot

3
UFC bouts in a row for Silva that are 5 rounds, Bigfoot’s last bout was the only time he went to a 5 round decision

14
Current ranking of Andrei Arlovski as a UFC heavyweight

11
Wins in the UFC by Arlovski, tied for 2nd most in UFC heavyweight history behind Frank Mir’s 14

9
Finishes inside the Octagon by The Pit Bull, tied for 3rd most in UFC heavyweight history

8
Knockdowns inside the Octagon by Arlovski, tied for 3rd most in UFC heavyweight history

7
KO/TKOs by Arlovski, tied for 2nd most in UFC heavyweight history

3
Number of fighters since UFC 29 who have scored both a knockout and a submission in under a minute: Arlovski, Joe Lauzon and Tom Lawlor

14
Wins by Gleison Tibau inside the Octagon, most in UFC lightweight division history

1.2
Submission attempt average over 15 minutes of fighting for Escudero in the UFC

25
Seconds it took for Alcantara to score a knockout of Vaughan Lee at UFC Fight Night: Munoz vs. Mousasi in May

83
Takedown accuracy percentage by Alcantara in his 8 UFC fights

3
Fights and different countries/continents for Hawaii’s Doane this year in the UFC as he has fought in Singapore, USA and, upcoming, Brazil

2
Wins/fights in the UFC for Doane

206
Significant strikes landed by Andrade in her rout of Rosi Sexton at UFC Fight Night: Machida vs. Munoz

6
First round finishes for Pacheco