By The Numbers: UFN Albuquerque

Breaking down Saturday’s UFC Fight Night: Henderson vs. Khabilov card By The Numbers... 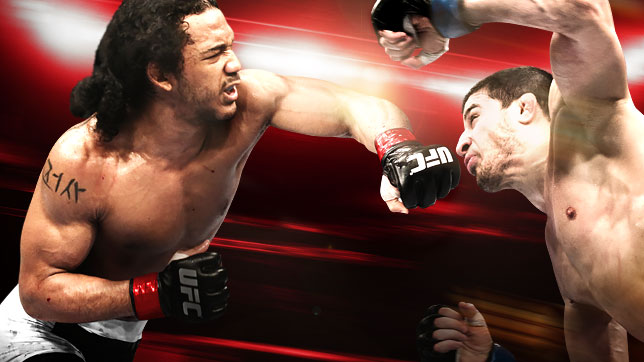 2:54:31
The amount of time “Smooth” has spent fighting inside the Octagon across 9 fights including 8 decision wins for Henderson

271
Significant strikes absorbed by Henderson in the UFC

561
Significant strikes landed for “Bendo” inside the Octagon

124
Significant strikes landed by “Smooth” against Nate Diaz at UFC on FOX: Henderson vs. Diaz, 6th most landed in UFC lightweight history in a single fight

25
Takedowns scored by Henderson inside the Octagon

23
Of Henderson’s takedowns have started from the clinch

6.07
Average number of takedowns per 15 minutes for Khabilov, UFC average 1.93

16
The Ultimate Fighter season finale which “Tiger” made his UFC debut by slamming Vinc Pichel three times en route to a first round KO win.

1
Fight of the Night bonus for “Tiger” against Jorge Masvidal at UFC: Fight for the Troops 3 where Khabilov displayed a spinning back kick, which dropped Masvidal in the 3rd round

13
Wins in the UFC for Diego “The Dream” Sanchez

4:22:57
Total time Sanchez has spent fighting inside the Octagon, 6th most in UFC history and most by any fighter who has not held a belt

6
Fight of the Night bonuses for Sanchez, tied for 2nd most behind Frankie Edgar’s 7

2
KO/TKO victories for Sanchez via flying knee, only fighter in UFC history to do so

2042
Significant strikes attempted by Sanchez, 7th most in UFC history

133
Takedown attempts by Sanchez, 4th most in UFC history

83
Of those takedown attempts by Sanchez are from distance, 2nd most behind Edgar’s 92

3
KO/TKO wins for Pearson inside the Octagon, tied for 5th most in UFC lightweight history

25.2
Percentage of those sig. strikes by Pearson from the clinch, 3rd largest proportion among active UFC lightweights (min. 350 att.)

71.7
Percentage of significant strike attempts from his opponent that “The Real Deal” has avoided, 3rd highest defense percentage in UFC lightweight history (min. 5 fights and 350 opp. att.) behind Frankie Edgar’s 71.8% and John Makdessi’s 75.5%

2012
Year that Pearson coached The Ultimate Fighter: Smashes and Norman Parke won the lightweight spot as a member of Pearson’s Team UK

6
Knockdowns by Dodson in 5 UFC fights

5
Knockdowns as a flyweight for Dodson, 2nd most behind John Lineker’s 6

3.68
Significant strikes landed per minute by Dodson, UFC average is 2.61

92.7
Percentage of those sig. strikes landed by Dodson while standing

10
Fighters in UFC history have earned a KO stemming from a standing elbow including Moraga’s in his Octagon debut first round knockout of Ulysses Gomez at UFC on FOX: Shogun vs. Vera

3
Wins inside the Octagon for Moraga with each by way of a different method - 1 KO, 1 submission over Chris Cariaso at UFC 155, and 1 split-decision over Dustin Ortiz at UFC Fight Night: Rockhold vs. Philippou

1:11
Time in the third round when Moraga latched on a guillotine choke on Cariaso to earn the win and a Submission of the Night bonus

80
Percentage for Moraga’s takedown defense against Ortiz in January