By The Numbers: UFN Abu Dhabi

Breaking down Friday’s UFC Fight Night: Nogueira vs. Nelson card By The Numbers... 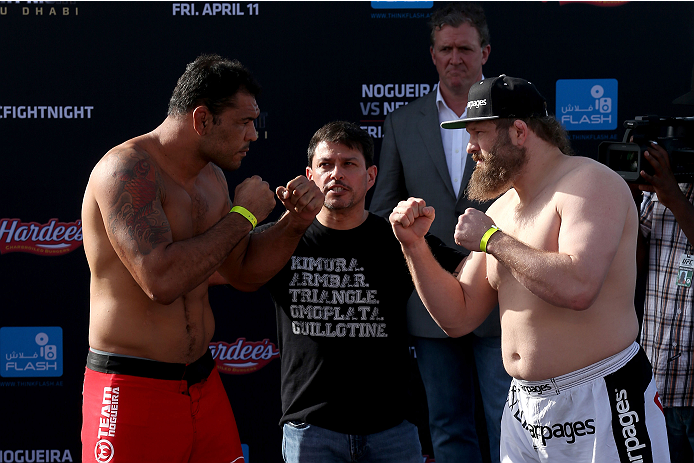 112
UFC event where the Octagon first went to Abu Dhabi

22
Wins combined in “Minotauro” Nogueira’s UFC/PRIDE career, tied for the 3rd most in the combined history of UFC/PRIDE/Strikeforce/WEC behind Wanderlei Silva’s 27 and Dan Henderson’s 23

7
Armbar stoppages for “Minotauro” in his combined UFC/PRIDE career, most in the UFC/PRIDE combined history with Ronda Rousey, Paulo Filho, and Kazushi Sakuraba tied for second with 6

56
Submission attempts from “Big Nog”, most in the combined history of UFC/PRIDE/Strikeforce/WEC

4
KO/TKO losses in the UFC for Nogueira, never suffered a stoppage loss before the UFC

5
Knockouts in the first round in the UFC

511
Significant strikes absorbed by Nelson in his UFC career, most by any fighter to never be knocked out

4
Knockout of the Night bonuses for Nelson in wins over Brendan Schaub, Stefan Struve, Dave Herman, and Cheick Kongo

3
Appearances competing at Guida’s new weight - 145 pounds, previously Guida has gone 1-1 at featherweight inside the Octagon

8
Fight Night bonuses for Guida, tied for 5th most in UFC history

51
Completed takedowns inside the Octagon for “The Carpenter,” 7th in UFC history

133
Takedown attempts for Guida in the UFC, tied for second with Diego Sanchez behind Damian Maia’s 139

5
Wins in a row for Kawajiri

3.4
Takedowns landed per 15 minutes for Kawajiri in PRIDE, 4th highest in PRIDE history

33
Career wins for “Crusher”, almost all of his fights were contested in famed Japanese promotions Shooto, PRIDE, and DREAM