Breaking down Saturday’s UFC on FOX 11 card By The Numbers... 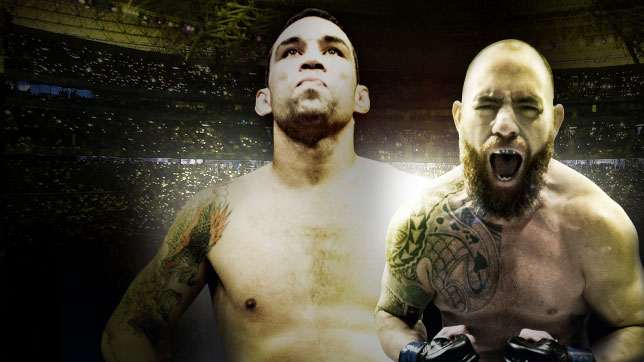 On Saturday, the Octagon is in Orlando for the heavyweight meeting between Fabricio Werdum and Travis Browne. But before UFC on FOX 11 begins, let’s take a look at the card By The Numbers.

100
Percentage of the UFC on FOX: Werdum vs. Browne main card that is ranked in the top 15 of their respective division on UFC.com

889
Days between the first UFC on FOX card and the forthcoming event, which are the only two headlined by a heavyweight bout

2
Gold medals won by Werdum as a black belt at the ADCC Submission Wrestling World Championships (2009, 2007)

5
First round stoppages inside the Octagon by #3 ranked heavyweight Travis “Hapa” Browne, 2nd most in division history behind UFC heavyweight champion Cain Velasquez’s 6

0
Number of other UFC fighters to score two wins with Browne’s patented standing elbow to the side of the head while defending a takedown (Gonzaga, Barnett)

18
Takedowns landed by “Cupcake” in Strikeforce history, tied for 5th most in promotion’s history

6
Submission wins by Tate, including the 4th round arm-triangle choke of Marloes Coenen to win the Strikeforce title

0
Fighters outside of Tate to have been knocked down 3x in a Strikeforce/UFC/WEC/PRIDE bout and comeback to finish their opponent - the 3rd round armbar of Julie Kedzie at Strikeforce: Rousey vs. Kaufman

238
Total strikes landed by #7 ranked women’s bantamweight Liz “Girl-Rilla” Carmouche in her bout for the Strikeforce title against Marloes Coenen, 2nd most ever landed in a Strikeforce fight

42
Significant strikes landed on the ground by Carmouche in the 2nd round against Jessica Andrade, 6th largest number of its kind in UFC history

13
Post-fight bonuses for #8 ranked lightweight Donald “Cowboy” Cerrone in his UFC/WEC career, most in the combined history

10
Number of opponents finished by Cerrone in his UFC/WEC career, 2nd at lightweight behind Nate Diaz’s 11

14
Submission wins for Cerrone in his MMA career

3
KO/TKO wins via kicks inside the Octagon for #11 ranked lightweight Edson Barboza, tied with Vitor Belfort for most in UFC history

7
Knockdowns at distance for Barboza, tied for 3rd most in UFC lightweight history

3
Consecutive highlight reel wins inside the Octagon for Romero - flying knee KO at UFC on FOX: Henderson vs. Melendez, KO via punches at UFC: Fight for the Troops 3, and TKO via punches & elbows at UFC Fight Night: Rockhold vs. Philippou

81
Percentage of Tavares’ takedown defense in the UFC, successfully stopping 21 of 26 attempts