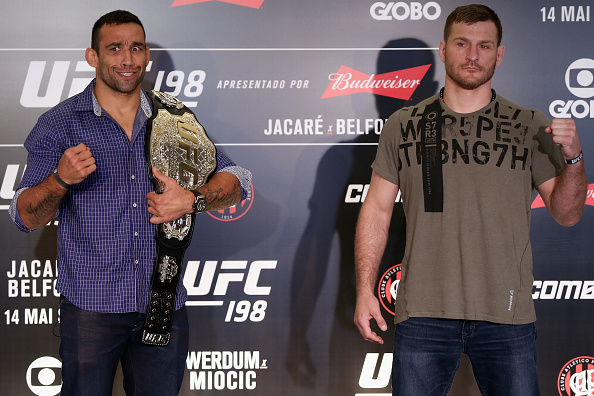 66.7
Percentage of those wins are finishes by Werdum including his guillotine choke of Cain Velasquez at UFC 188 to win the heavyweight title

2
Current ranking of Stipe Miocic as a UFC heavyweight

3
KO/TKOs by Miocic have occurred in under a minute each, one of just five fighters in UFC history to accomplish this task - Vitor Belfort, Johny Hendricks, Anthony Johnson, Miocic, and Mike Swick

22:47
Time into the bout when Miocic earned a striking stoppage of Mark Hunt at UFC Fight Night: Miocic vs. Hunt, 3rd latest KO/TKO in UFC history

546
Significant strikes landed by Miocic inside the Octagon, 5th most in UFC heavyweight history

2
Current ranking of Ronaldo “Jacare” Souza as a UFC middleweight

34
Takedowns by Jacare in UFC and Strikeforce competition

84.6
Percentage of Souza’s 13 UFC and Strikeforce opponents he has taken down which he has attempted at least one takedown on

12
KO/TKOs by “The Phenom”, most in UFC history

15:3
Knockdown ratio by Belfort across his pro career

13
First round finishes by Belfort inside the Octagon, most in UFC history

18
First round finishes by Belfort across his pro career

14
Finishes by Belfort, tied with Anderson Silva for most in UFC history