Breaking down Saturday's UFC 180: Werdum vs. Hunt card By The Numbers... 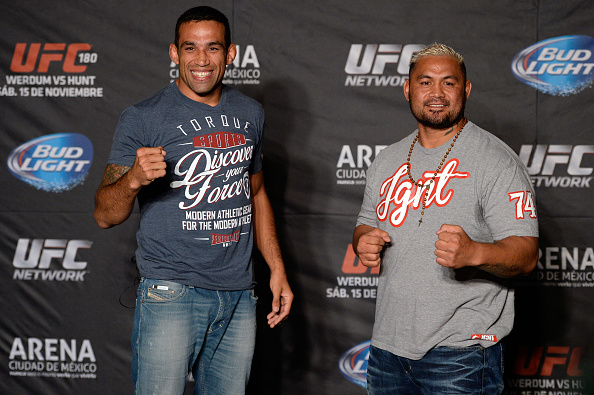 On Saturday, the Octagon is in Mexico City, Mexico for the UFC interim heavyweight championship bout between Fabricio Werdum and Mark Hunt. But before UFC 180 begins, let’s take a look at the card By The Numbers.

7400
Approximate elevation in feet above sea level of Mexico City

5300
Approximate elevation in feet above sea level of Denver

8
Hours it took for 21,000 tickets to be sold for this Saturday’s historic event as the Octagon takes center stage for the first time in Mexico City

4
Wins in a row for Werdum inside the Octagon, tied for 2nd longest active UFC win streak with UFC heavyweight champ Velasquez behind Andrei Arlovski’s 5

+61
Strike differential in favor of Werdum against Browne

9
Submission wins by Werdum across his pro career including the triangle choke of Fedor Emelianenko in Strikeforce, which ended the legendary heavyweight’s 10 year unbeaten streak

28
Takedowns by Werdum in his last 22 fights including two takedowns of Browne, previously Browne had never been taken down in his 10 UFC fights

5
Knockdowns by Hunt inside the Octagon, tied for 9th most in UFC heavyweight history

87.3
Percentage of those sig. strikes landed were to Hunt’s opponent’s head, largest proportion of sig. strikes to the head in UFC heavyweight history (min. 350 att.)

113
Significant strikes landed by Hunt against Yosuke Nishijima at PRIDE 31, most ever landed in a single PRIDE fight

2001
Year that Hunt became the K-1 World Grand Prix Champion, only non-European to do so

5
KO/TKO wins by Ellenberger inside the Octagon, tied for 5th most in the UFC welterweight history

21
Takedowns by Ellenberger in the UFC

57
Percentage of those takedowns starting from distance

43
Percentage of those takedowns starting from the clinch

11
Current ranking of Kelvin Gastelum as a UFC welterweight

10
Wins and 0 losses by Gastelum in his pro career

4
Wins inside the Octagon by Gastelum

3
Wins as a welterweight by Gastelum

4.32
Significant strikes landed per minute by Gastelum as a welterweight, UFC average is 2.83

3
Finishes by Lamas in the UFC including a Submission of the Night of Cub Swanson, only fighter to defeat Swanson in his 7 UFC bouts

7
Consecutive wins by Bermudez inside the Octagon, tied with UFC featherweight champ Aldo for longest win streak in the division

5
Knockdowns by Bermudez, 2nd most in UFC featherweight division behind Max Holloway’s 6

28
Takedowns by Bermudez, most in UFC featherweight division