Breaking down Saturday's UFC 178: Johnson vs. Cariaso card By The Numbers... 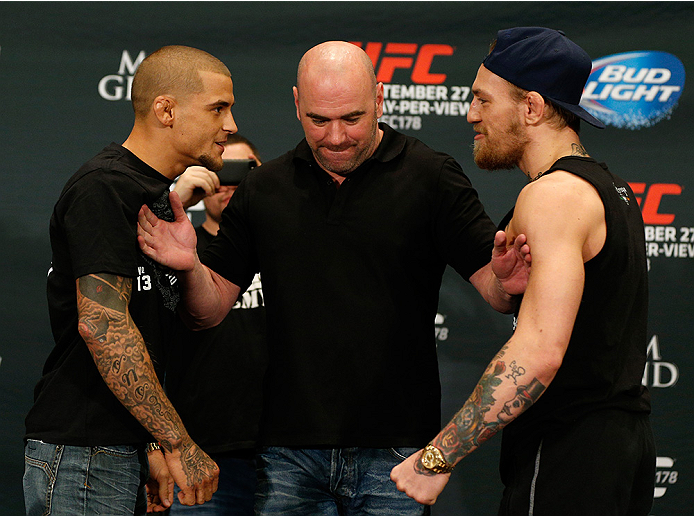 On Saturday, the Octagon is in Las Vegas for the UFC flyweight championship fight between Demetrious Johnson and Chris Cariaso. But before UFC 178 begins, let’s take a look at the card By The Numbers.

100
Percentage of the fighters in UFC 178’s top three tangles that are ranked in their division’s top 15 as UFC flyweight champion Demetrious Johnson takes on Chris Cariaso, Donald Cerrone clashes with Eddie Alvarez and Dustin Poirier collides with Conor McGregor

23:43
Minutes it took for Johnson to successfully defend the UFC flyweight title for the 2nd time by securing an armbar submission on John Moraga at UFC on FOX: Johnson vs. Moraga, latest submission ever in a UFC fight

100
Percentage of Johnson’s takedown accuracy in his bout against Moraga where “Mighty Mouse” went 12 for 12,  most takedowns ever completed in a UFC bout without a miss

40
Takedowns Mighty Mouse has completed inside the Octagon, most by any fighter since the WEC merger in 2011 including 24 takedowns at flyweight

576
Significant strikes landed by Mighty Mouse as a flyweight, most in the division’s history

38.4
Percentage of those sig. strikes landed by Johnson were in the clinch, 2nd largest proportion of clinch strikes among active UFC fighters behind Sarah Kaufman’s 43.6% (min. 350 att.)

133
Significant strikes landed by Johnson against Ali Bagautinov at UFC 174,

8
Current ranking of challenger “Kamikaze” Cariaso as a UFC flyweight

326
Significant strikes landed by Cariaso inside the Octagon, 3rd most in UFC flyweight history

5
Current ranking of “Cowboy” Cerrone as a UFC lightweight

162
Leg kicks landed by Cerrone inside the Octagon, 2nd most in UFC lightweight history to Sam Stout’s 212

14
Current ranking of Alvarez as a UFC lightweight

21
Finishes by Alvarez in his pro career - 14 KO/TKOs, 7 submissions

13
Of those finishes occurred in the first round

11
Years Alvarez has been a pro MMA fighter

5
Current ranking of “The Diamond” Poirier as a UFC featherweight

8
Wins by Poirier inside the Octagon, most in UFC featherweight history

5
Finishes by The Diamond amongst those UFC wins, most finishes in UFC featherweight history

9
Current ranking of “The Notorious” McGregor as a UFC featherweight

67
Seconds it took for McGregor to defeat Marcus Brimage at UFC on Fuel TV: Mousasi vs. Latifi, 3rd fastest debut by a UFC featherweight behind Pablo Garza’s 51 seconds and Tiequn Zhang’s 48 seconds

4.55
Significant strikes per minute for McGregor in his three Octagon performances, UFC average is 2.61

71
Percentage for striking defense for McGregor, UFC average is 58%

6.07
Max Holloway’s significant strikes landed per minute rate prior to his bout against McGregor

1.53
Significant strikes landed per minute by Holloway against McGregor

80
Takedown accuracy by “The Notorious” against Holloway, plus 6 guard passes for McGregor