Breaking down Saturday's UFC 177: Dillashaw vs. Soto card By The Numbers... 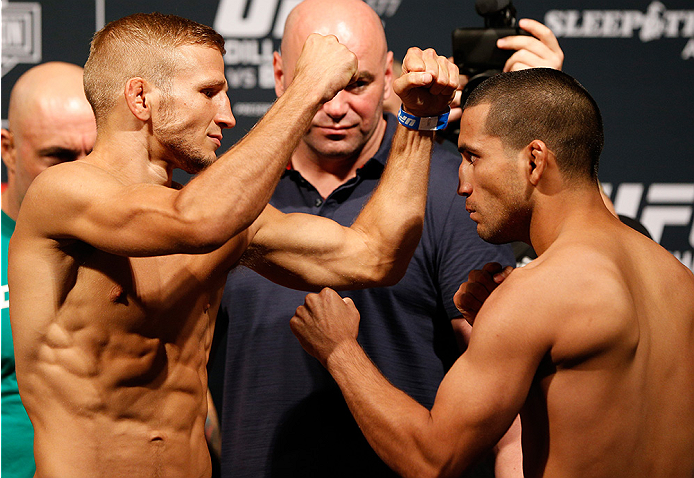 On Saturday, the Octagon is in Sacramento for the UFC bantamweight championship fight between T.J. Dillashaw and Joe Soto. But before UFC 177 begins, let’s take a look at the card By The Numbers.

3:58
Minutes into their fight when Dillashaw scored his first knockdown of Barao

22:26
Minutes into their fight when Dillashaw scored the second knockdown and finish of Barao to become the new UFC bantamweight champion

83
Percentage of those sig. strikes attempts targeted each other’s head

3
KO/TKO wins by Dillashaw, most in UFC bantamweight history

4
Knockdowns by Dillashaw inside the Octagon including the mentioned 2 against Barao, tied for 2nd most in UFC bantamweight history behind Michael McDonald’s 5

>100
Significant strikes landed by Dillashaw in two different UFC fights (against Mike Easton and Barao), only Alex Caceres has scored 100+ sig. strikes in a UFC bout twice as well

12
Takedowns landed by Dillashaw inside the Octagon, 6th most as a UFC bantamweight

11
Submission attempts by Dillashaw, 2nd most in the UFC bantamweight division behind Alex Caceres’ 12

9
Of those submission attempts were rear naked choke attempts by Dillashaw, 5 were against Walel Watson

69.1
Significant strike defense by Dillashaw inside the Octagon, 4th best in UFC bantamweight

18
Fights for Danny Castillo under the Zuffa banner, 8 in the WEC and 10 in the UFC

43
Takedowns landed for Castillo, 4th most in UFC/WEC lightweight history

27
Takedowns landed for Castillo inside the Octagon

13
The Ultimate Fighter season Ferguson won as a welterweight

4
First round finishes for El Cucuy in the UFC, 3 KO/TKOs and 1 submission

1:52
Time it took for Ferguson to slap on a fight ending D’Arce choke on Mike Rio at UFC 166, fastest D’Arce choke in UFC history

100
Takedown defense percentage by Ferguson, stuffing all 7 attempts inside the Octagon