Breaking down Saturday's UFC 175: Weidman vs. Machida card By The Numbers... 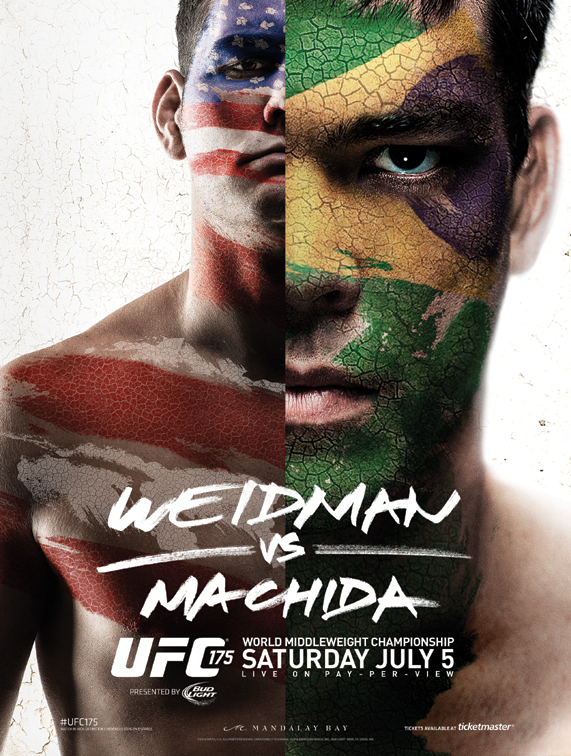 On Saturday, the Octagon is in Las Vegas for championship fights between Chris Weidman and Lyoto Machida and Ronda Rousey and Alexis Davis. But before UFC 175 begins, let’s take a look at the card By The Numbers.

185
UFC title, which will be contested in the main event at UFC 175 as Lyoto “The Dragon” Machida challenges UFC middleweight champion Chris Weidman

135
UFC title, which will be contested in the co-main event at UFC 175 as Alexis Davis challenges UFC women’s bantamweight champion “Rowdy” Ronda Rousey

2006, 2007
Years that Weidman was an NCAA D1 All-American wrestler at Hofstra University

15
Takedowns by Weidman inside the Octagon

21
Days notice for Weidman going into his UFC debut against Alessio Sakara, which Weidman won by unanimous decision

14
Days notice for Weidman going into his bout with Demian Maia, which Weidman won by unanimous decision

46.6
Percentage of total cage time that Weidman has been in a position of control over his opponents, 4th largest proportion in UFC middleweight history (min. 5 fights)

3
Seconds where an opponent has been in control of Weidman in his 7 UFC appearances, shortest amount in UFC history (min. 5 fights)

2
UFC fighters have held UFC belts in two different weight classes with Randy Couture (heavyweight and light-heavyweight) and B.J. Penn (welterweight and lightweight), Machida could potentially be the third to do so

98
UFC event where Lyoto “The Dragon” Machida won the UFC light-heavyweight title from then champ Rashad Evans via punches, which won Knockout of the Night

12
Knockdowns by Machida inside the Octagon, 4th most knockdowns in UFC history behind Melvin Guillard's 13, Chuck Liddell’s 14, and Anderson Silva’s 17

4
Knockout of the Night bonuses for Machida

2
KO/TKO victories for “The Dragon” via kick to the head: Randy Couture at UFC 129 and Mark Munoz at UFC Fight Night: Machida vs. Munoz (Machida’s middleweight debut)

100
Takedown defense percentage for “The Dragon” as a middleweight, stuffing 3 attempts in his 2 bouts

569
Days Rousey will have reigned as the first/only UFC women’s bantamweight champ - since December 6th, 2012 - when Rousey walks to the Octagon

66
Seconds for the “Rowdy” one to finish Sara McMann via KO/TKO (knee to the body), 1st non-armbar win for Rousey and fastest KO/TKO in UFC women’s bantamweight history

6
Placing among the fastest UFC title fight knockouts for Rousey’s win over McMann behind Junior dos Santos at UFC on FOX: dos Santos vs. Velasquez, Vitor Belfort at UFC 46, Tito Ortiz at UFC 30, Frank Shamrock at UFC 16, and Andrei Arlovski at UFC 55<br>
2
Times a UFC title fight was won with a body strike, Rousey over McMann and Georges St-Pierre vs. Matt Serra at UFC 83<br>
6
Finishes in the 1st round for “Rowdy” in combined UFC/Strikeforce competition

24:32
Career cage time for Rousey across her 9 pro MMA bouts

14.57
Total strikes landed per minute for the “Rowdy” one in her combined UFC/Strikeforce career, most in combined history (min. 5 fights)

12
Takedowns in UFC/Strikeforce for Rousey, 12 of 17 attempts or 71% accuracy

100
Percentage of Rousey’s takedowns originating from the clinch

5
Fight win streak for Alexis Davis including, aforementioned, 3 wins inside the Octagon

4.97
Significant strikes landed per minute for Davis in UFC/Strikeforce, a full 1.84 sig. strikes more than Rousey

45
Of those strikes landed by Davis were leg kicks

21, 22
Leg kicks landed by Davis in her recent decision wins over Liz Carmouche and Jessica Eye