Breaking down Saturday's UFC 174: Johnson vs. Bagautinov card By The Numbers... 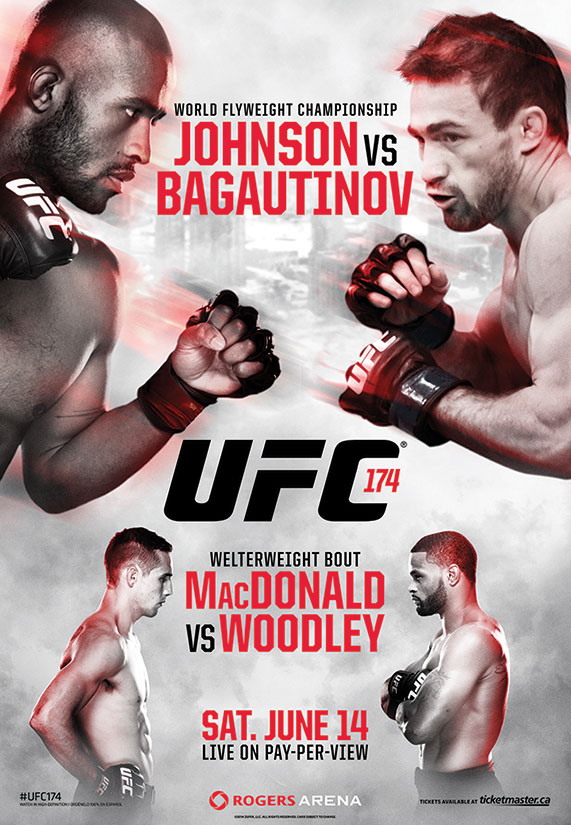 On Saturday, the Octagon is in Vancouver for the flyweight championship fight between Demetrious Johnson and Ali Bagautinov. But before UFC 174 begins, let’s take a look at the card By The Numbers.

Breaking down Saturday's UFC 174: Johnson vs. Bagautinov card By The Numbers...

1099
Days between the last Octagon appearance in Vancouver at UFC 131 - headlined by Junior dos Santos vs. Shane Carwin - and this Saturday’s UFC 174 - headlined by UFC flyweight champion Demetrious Johnson vs. Ali Bagautinov

23:43
Minutes it took for Johnson to successfully defend the UFC flyweight title for the 2nd time by securing an armbar submission on John Moraga at UFC on FOX: Johnson vs. Moraga, the latest submission ever in a UFC fight

100
Percentage of Johnson’s takedown accuracy in his bout against Moraga where “Mighty Mouse” went 12 for 12,  most takedowns ever completed in a UFC bout without a miss

40
Takedowns “Mighty Mouse” has completed inside the Octagon, most by any fighter since the WEC merger in 2011

2
Fighters in UFC history that have completed 10 or more takedowns in a single fight twice, Johnson and former UFC welterweight champion Georges St-Pierre

443
Significant strikes landed by “Mighty Mouse” as a flyweight, most in the division’s history

73
Of those significant strikes by Johnson were landed in the clinch, 2nd most ever landed while in the clinch in a UFC bout behind Sarah Kaufman’s 84 at The Ultimate Fighter: Nations Finale

10
Fight win streak overall for “Puncher,” dating back to September 2011

3.45
Takedowns completed per 15 minutes for Bagautinov inside the Octagon, the UFC average is 1.93 (min. 5 fights)

10
Takedowns completed by Bagautinov in his 3 Octagon performances, 5th most in the flyweight division behind Zach Makovsky’s 11, Alptekin Ozkilic’s 12, Tim Elliott’s 18, Demetrious Johnson’s 24

6
Successful takedowns for Bagautinov against John Lineker at UFC 169

6850
Approximate number of miles from The Republic of Dagestan where Bagautinov spent his life wrestling to Albuquerque, New Mexico where “Puncher” trains MMA with Team Jackson

130
Significant strikes landed by Bagautinov in his 3 UFC bouts

2
Ranking, currently, for MacDonald in the UFC welterweight division

94.1
Takedown defense percentage across Woodley’s 12 bouts combined in UFC/Strikeforce, 32 of 34

8
Wins in Strikeforce for “The Chosen One”, tied for 4th in Strikeforce history with Daniel Cormier behind Luke Rockhold’s 9, Josh Thomson’s 10, and Gilbert Melendez’s 11

40.1
Percentage of those significant strikes landed by “The Chosen One” were in the clinch, largest proportion of clinch sig. strikes in Strikeforce history (min. 350 att.)

43.2
Percentage of Woodley’s significant strikes landed from within the clinch inside the Octagon

3
Ranking for Woodley in the UFC welterweight division

9
Ranking for Bader in the UFC light-heavyweight division

6
Knockdowns for “Darth” inside the Octagon, tied for 5th most in UFC light-heavyweight history

3
KO/TKO victories for Bader via punches at distance, tied for 3rd most in the UFC’s 205 pound division’s history

50
Seconds it took “Darth” to drop Vladimir Matyushenko with a punch and then stop “The Janitor” via guillotine choke at UFC on FOX: Johnson vs. Dodson, fastest submission in UFC’s 205 lb history

23
Takedowns for Bader inside the Octagon, 5th most in UFC light heavyweight history

100
Percentage of Cavalcante’s wins by way of strikes

12
Ranking for “Feijao” in the UFC’s light heavyweight division

78
Seconds it took for Cavalcante to cause Igor Pokrajac to tap due to strikes at UFC Fight Night: Belfort vs. Henderson, quickest submission to strikes in modern UFC history

4
KO/TKO wins in Strikeforce for “Feijao”, tied for 2nd most behind Cung Le’s 7

80.8
Percentage for Cavalcante’s takedown defense in his last 12 fights combined in the UFC/Strikeforce/EliteXC (21-26), UFC average 59%