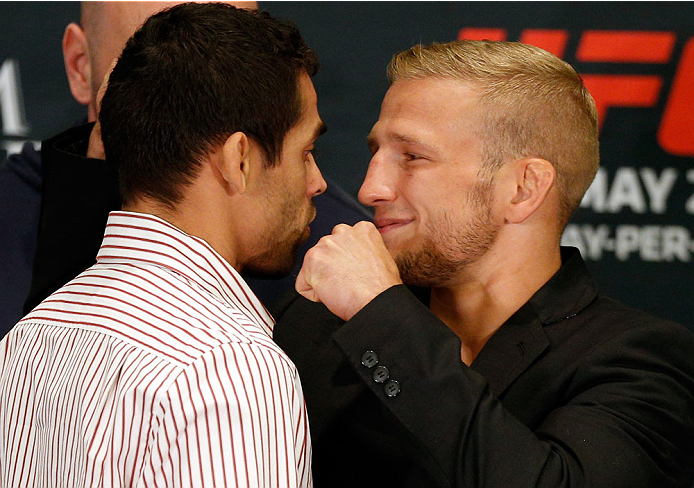 On Saturday, the Octagon is in Las Vegas for the bantamweight championship fight between Renan Barao and TJ Dillashaw. But before UFC 173, let’s take a look at the card By The Numbers.

6
Finishes for Nova Uniao’s Barao in UFC/WEC competition, tied for most in bantamweight history with Brian Bowles 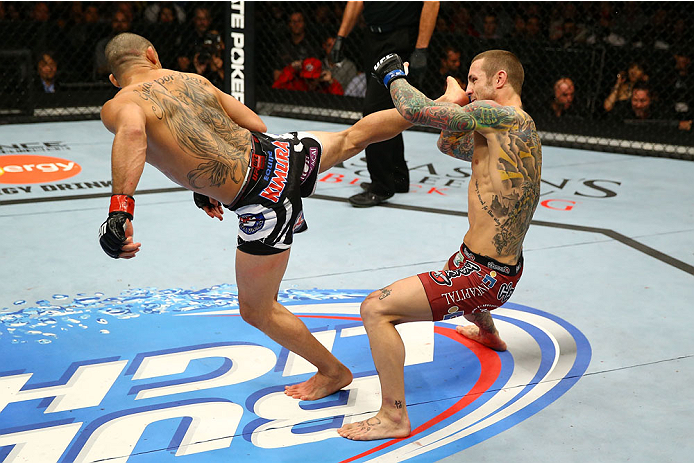 14
The Ultimate Fighter season Dillashaw was a finalist

117
Significant strikes landed (on 232 attempts) by the Team Alpha Male product against Mike Easton, personal best for Dillashaw and tied for 5th most ever by a bantamweight in a single UFC/WEC fight

33.8
Percentage of Dillashaw’s 287 total significant strikes landed in the UFC that have been on the ground, 2nd largest proportion of ground strikes in UFC/WEC bantamweight history (min. 250 att.) with Edwin Figueroa in 1st at 34.2% 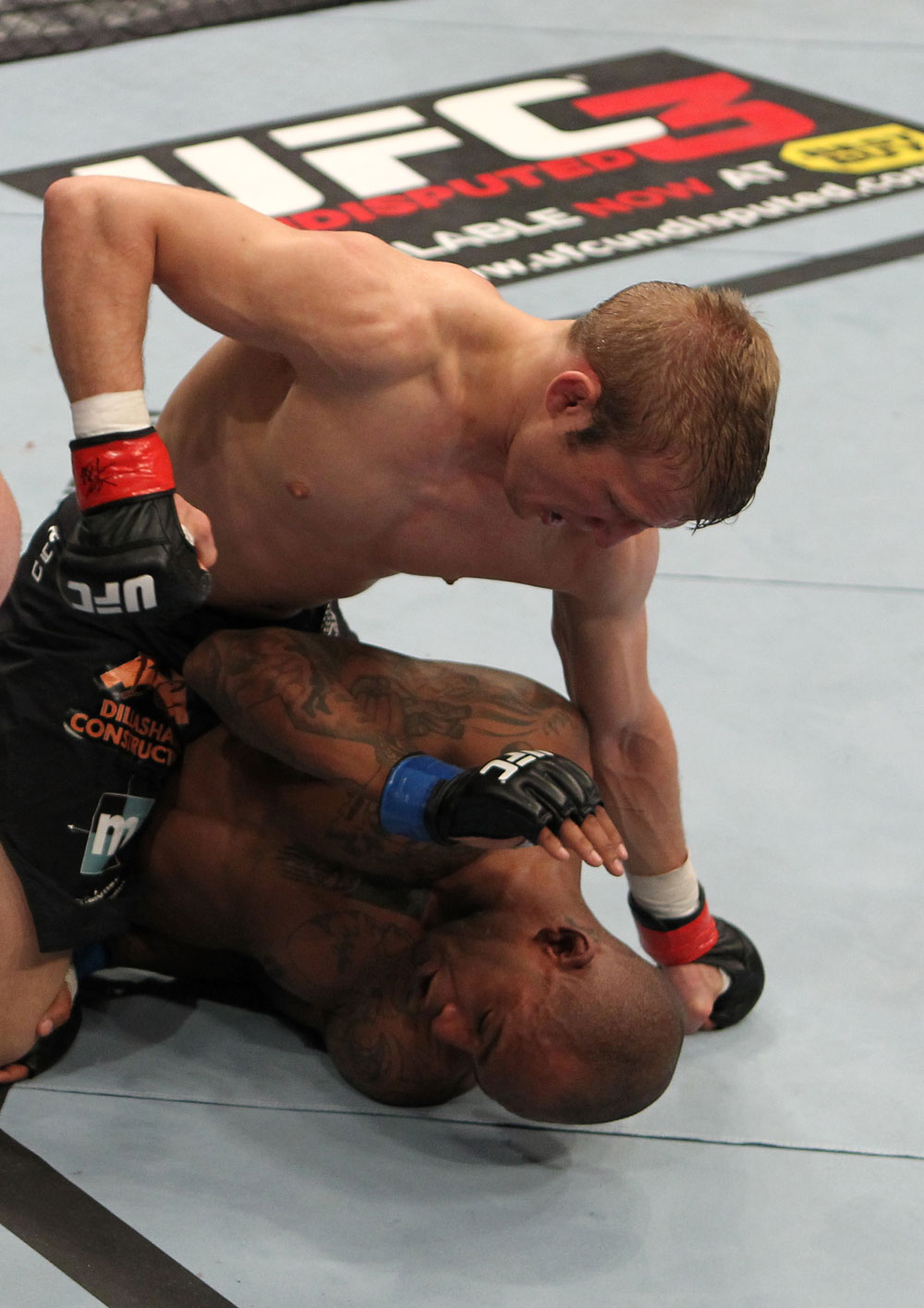 2.28
Submissions per 15 minutes of fight time for Dillashaw

9
Rear naked choke submission attempts from Dillashaw in the UFC, 5 were against Walel Watson

14
Consecutive wins for Cormier in MMA with 0 losses

4
Wins for Cormier against fighters who were once UFC champions or challenged for the belt - Frank Mir, Josh Barnett, Antonio Silva, and Jeff Monson

0
Times Cormier has been taken down in his MMA career

4.02
Sig. strikes landed per minute by Cormier in his last 10 bouts at heavyweight, UFC average is 2.61 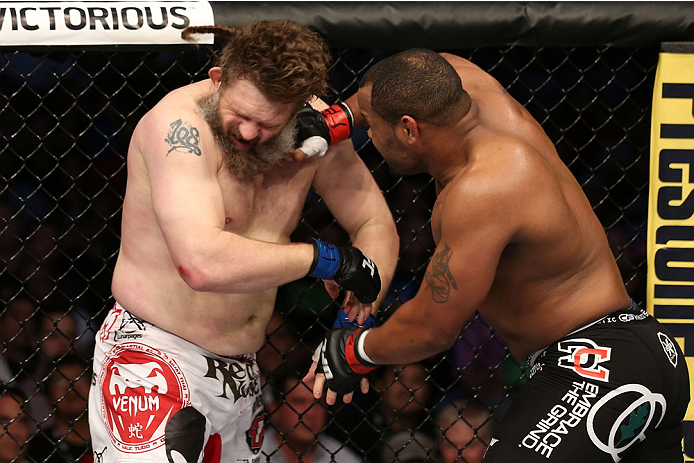 1
Round lost on 15 judges’ scorecards in Cormier’s career

43
Years old, Dan Henderson is the oldest fighter on the UFC’s active roster

2
Divisions “Hendo” was the champion - PRIDE’s middleweight (205 pounds) and welterweight (183 pounds) - simultaneously, only fighter to ever do that in UFC/PRIDE/Strikeforce/WEC 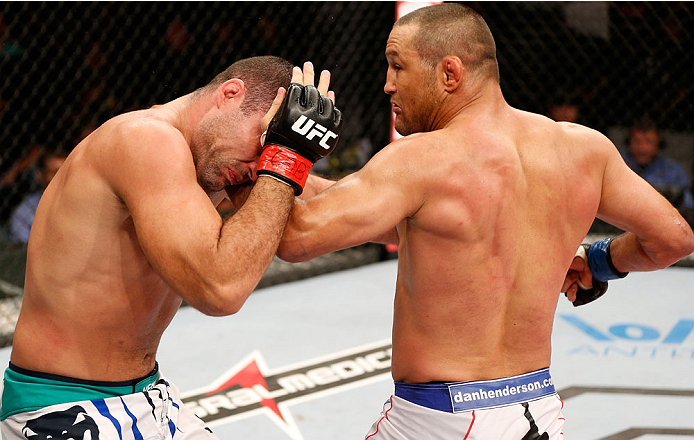 14
KO/TKO wins by Henderson including his Performance of the Night KO over “Shogun” at UFC Fight Night: Shogun vs. Henderson II

2
Submissions, 1 by guillotine choke and 1 via “knee to the ribs”

87.5
Percentage of Henderson’s takedowns from the clinch in UFC/PRIDE/Strikeforce

48
Takedowns landed in UFC/PRIDE/Strikeforce, 4th most by a fighter competing at 183 pounds or heavier

31
Takedowns landed in his PRIDE career alone, 2nd most of any fighter in PRIDE behind Kazushi Sakuraba’s 40

12
KO/TKO wins in the first round for “Ruthless”

97
Percentage of those sig. strikes thrown at distance

82.4
Percentage of Lawler’s successful takedowns in the UFC

301
Days between Ellenberger’s last fight at UFC on FOX: Johnson vs. Moraga and his forthcoming bout with Lawler, longest layoff in Ellenberger’s 36 fight career

18
KO/TKO wins for Ellenberger in his career

5
KO/TKO wins for “The Juggernaut” inside the Octagon

2
Knockout of the Night bonuses for Ellenberger over Jake Shields at UFC Fight Night: Shields vs 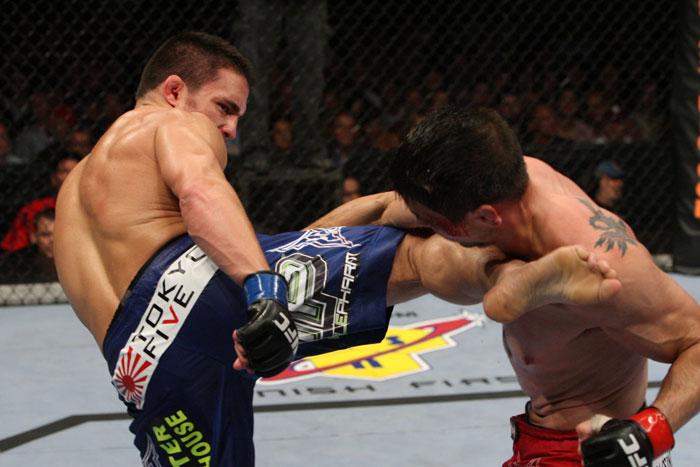 . Ellenberger and Nate Marquardt at UFC 158

93
Percentage of Ellenberger’s takedown defense in the UFC

1
Times Ellenberger has been taken down in 11 Octagon appearances and 15 attempts, the lone successful attempt was in Ellenberger’s UFC debut against Carlos Condit