Breaking down Saturday's UFC 172: Jones vs. Teixeira card By The Numbers... 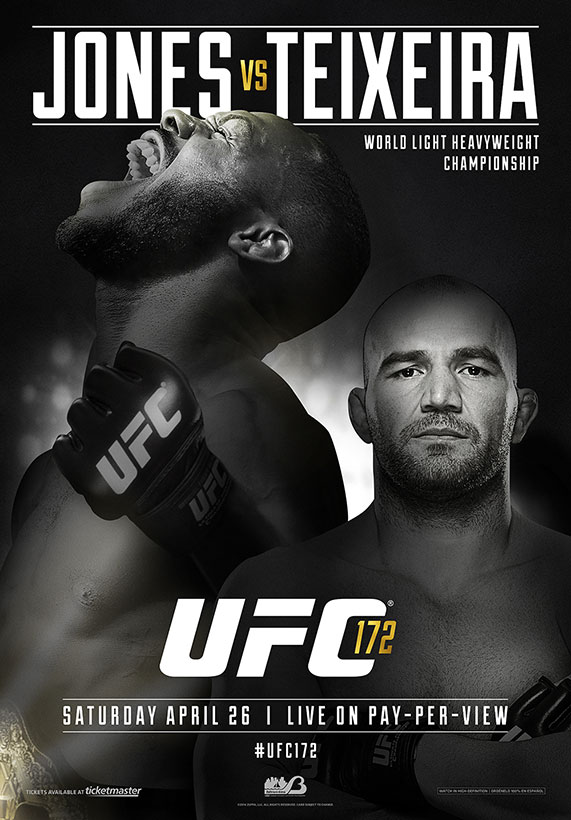 This Saturday, the Octagon makes its first stop in Baltimore, Maryland as Jon Jones meets Glover Teixeira. But before UFC 172 begins, let’s take a look at the card By The Numbers.

172
This weekend’s UFC event, which will be the first Octagon appearance ever in the city of Baltimore or the state of Maryland

205
Pounds, which is the weight division that will take center stage at UFC 172 in both the main and co-main event as UFC light heavyweight champion Jon Jones takes on Glover Teixeira, and Phil “Mr. Wonderful” Davis collides with Anthony “Rumble” Johnson

10
Fight win streak for Jones inside the Octagon, UFC light heavyweight division record, the longest active streak in the UFC, and the 4th longest streak in UFC history behind Royce Gracie’s 11, George St-Pierre’s 12, and Anderson Silva’s 16

75
Percentage of Jones’ finishing rate throughout his 19-1 pro career: 9 KO/TKOs and 6 submissions

134
Significant strikes landed by “Bones” against Alexander Gustafsson at UFC 165, most ever in a UFC light heavyweight title fight and 4th most in UFC title fight history

50.9
Takedown accuracy percentage for Jones’ 27 successful takedowns in his UFC career, 2nd highest percentage in the UFC at 205 pounds to Lyoto Machida’s 65%

95.8
Takedown defense percentage for “Bones” who has only been taken down 1 time in 24 attempts in his UFC career (Gustafsson scored the lone takedown at UFC 165)

5
Fight win streak - with 4 finishes - inside the Octagon, 2nd longest win streak in the UFC’s 205-pound division behind Jones’ 10

3316
Days since Teixeira’s last MMA loss, which was his 4th fight

51.5
Percentage of Teixeira’s significant strikes in the UFC landed on the ground, the largest proportion of any fighter in UFC light heavyweight history (min. 350 sig. strike att.)

4.62
Successful takedowns per 15 minutes for Teixeira in the UFC, highest average for active UFC 205ers

2002
Year that Teixeira made his pro MMA debut at WEC 3 in a hard-fought loss to Eric Schwartz, which is where coach John Hackleman saw Teixeira and invited him to train at his gym The Pit with future UFC Hall of Famer Chuck “The Iceman” Liddell

3
Fight win streak Davis is currently enjoying inside the Octagon

8
UFC wins for Davis in his Octagon career, tying Davis with Gustafsson and UFC Hall of Famer Stephan Bonnar for 9th most wins in UFC 205 pound history

3
Submission wins inside the Octagon for Davis: twice by anaconda choke and a one-armed kimura dubbed the “Mr. Wonderful” at UFC 123, which received Submission of the Night honors

0
Times “Mr. Wonderful” has been knocked down in his 14 fight pro MMA career

4
KO/TKO wins in the 6 fights that “Rumble” has won outside of the Octagon, which earned him his second shot in the UFC

5
First round finishes for Johnson in the UFC’s welterweight division, most in UFC 170 pound history

13
Seconds it took for Johnson to score his UFC debut knockout at UFC Fight Night: Stout vs. Fisher and “Rumble” took that fight on less than 2 weeks’ notice