Rousey, McMann, and Cormier...by the numbers... 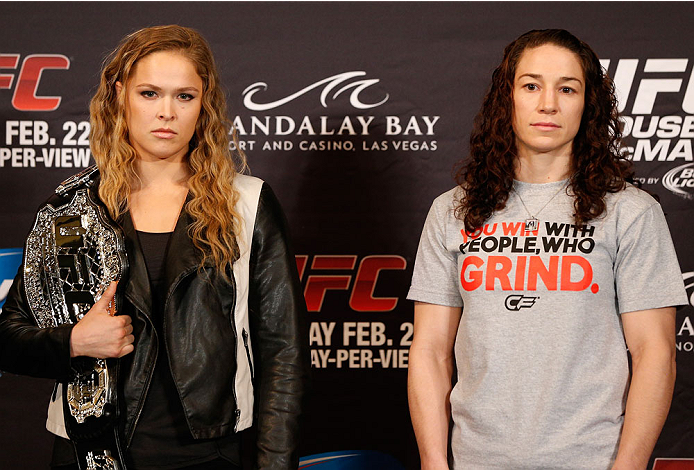 UFC 170 takes place this Saturday night at the Mandalay Bay Events Center in Las Vegas. Before the fights begin, let’s look at the three former Olympians at the top of the main card - female bantamweights Ronda Rousey and Sara McMann, and light heavyweight Daniel Cormier – by the numbers.

2004, 2008
Olympic Games where Daniel Cormier represented the US in freestyle wrestling

63/65
UFC pay-per-views where UFC Hall of Famer Matt Hughes attempted to make the same 56 day turnaround, which began with a win over BJ Penn and ended with a loss to Georges St-Pierre

23:26
Length in minutes of in-cage action for Rousey’s 8 fight career

10:58
Length of Rousey’s successful UFC 168 title defense against Miesha Tate, the first bout where “Rowdy” entered the second or third round

2:56
Average length of Rousey’s fights in her career

8
Fights/wins/wins by armbar for Rousey

7
First round wins by armbar for the “Rowdy” one

6
Armbar submissions by Rousey are the most by any fighter in the combined history of UFC and Strikeforce (2 UFC, 4 Strikeforce)

3
Other fighters in the combined history of UFC/Strikeforce/PRIDE/WEC have 6 armbar wins - Kazushi Sakuraba, Paulo Filho, and, with the most, Antonio Rodrigo “Minotauro” Nogueira has 7

25
Seconds it took for the “Rowdy” one to win by armbar in her Strikeforce debut, the 2nd fastest submission in Strikeforce history

54
Seconds it took for the “Rowdy” one to win by armbar in her first title defense of the Strikeforce women’s bantamweight belt, fastest submission in a Strikeforce championship bout history

28
Successful takedown attempts by McMann in her last 5 fights

1.63
Significant strikes absorbed per minute by McMann in her last 5 fights, UFC average is 2.61

51
Percentage for McMann’s significant strikes accuracy in her last 5 fights, UFC average is 42%

4
Wins for Cormier against fighters who were once UFC champions or challenged for the belt - Frank Mir, Josh Barnett, Antonio Silva, and Jeff Monson

0
Times Cormier has been taken down in his MMA career

54.5
Percentage of striking accuracy for Cormier in his 2 UFC bouts

1
Round lost on 15 judges’ scorecards in Cormier’s career

96
Kilograms or 211 pounds, the weight Cormier competed at in the Olympics