By The Numbers: A Tribute to BJ Penn

A By The Numbers tribute to BJ Penn... 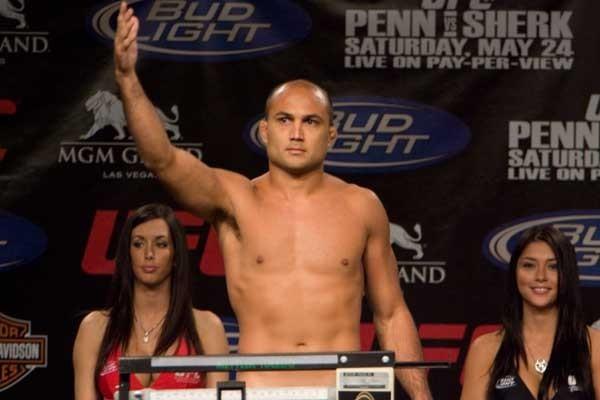 If BJ Penn is not one of your all-time favorite fighters then you’re doing it wrong.

At UFC 31, a 22-year-old BJJ black belt from Hawaii entered the Octagon for the first time to deliver a star-in-the-making performance. Of course, Penn displayed excellent grappling skills, but, more so, Penn showed unique flexibility and devastating punching power as well. Within the year, “The Prodigy” would become a huge fan favorite with his willingness to scrap wherever the fight went and his ability to finish once there.

What UFC fans grew to understand was that with Penn in the cage, everything was possible.

Knockouts and submissions were both on the table. Takedown defense became an art form. Weight classes became pedestrian as Penn went on to win UFC titles as a welterweight and lightweight. The Hawaiian was creating a legacy from Day One and everyone was in on that exciting ride for 13 years.

Here are the 10 most memorable UFC performances from “The Prodigy”.

Following back-to-back first round KO/TKO finishes inside the Octagon in New Jersey, “The Prodigy” had lived up to his moniker and then some by showing heavyweight knockout power in a spry lightweight’s body. Penn’s third trip into the cage had title implications as he was set to scrap with Japanese MMA star Caol Uno, who had already gone the distance in his failed title bid with then champ Jens Pulver. The stage was set for a classic confrontation between the two skilled fighters, but instead it took longer for the introductions than the fight. As the bout started, Uno screamed across the cage to throw a flying knee/sidekick, which Penn swiftly avoided then returned fire with a combination of punches that left Uno out on his back against the cage. “The Prodigy” celebrated his 11-second win by exiting the cage and running back up the entrance ramp.

It only took 21 seconds for “The Prodigy” to cap off one of the greatest trilogies the Octagon has ever known. In “BJ Penn: A Fighter Retires,” Thomas Gerbasi paints the picture of the former two-time UFC champion sharing an honest and calm moment with his older brother JD prior to highly-anticipated third clash with UFC Hall of Famer Matt Hughes. After the back-and-forth, Penn calls to UFC site coordinator Burt Watson to yell his name and lead him out to the Octagon like “The Godfather of Soul” James Brown being brought to the stage for one final performance. Once inside the cage, “The Prodigy” stamped out his final UFC win with a counter right, which dropped Hughes and led to Penn following up with some shots on the ground. Nine-plus years in the UFC, “The Prodigy” still packed that one-punch power.

It was the first time fight fans really saw the eventual longtime UFC welterweight champion Georges St-Pierre hurt inside the Octagon. Marking his return to the UFC cage for the first time in over two years, “The Prodigy” collided in a title eliminator with St-Pierre, who was on a three-fight win streak in the organization. The opening round went from bad to worse for St-Pierre, who was clearly outmatched by Penn’s knuckled attack, which tore up St-Pierre’s face as well as his body. Sporting a crimson mask for the first time inside the Octagon, St-Pierre would use his superior gas tank to push the pace and outlast Penn in the next two rounds en route to a split decision victory. While not a win, seeing the damage Penn could do to an uber-athletic specimen like St-Pierre in such a short time span on the feet with his fists was possibly more impressive than the final outcome.

Part II of the Hughes/Penn trilogy featured the quintessential entrance of “The Prodigy,” with Israel Kamakawiwo’ole’s “Hawai’i ‘78” setting an emotional tone for the Hilo warrior. With tears in Penn’s unflinching stare, the music switched to Gnarls Barkley’s “Crazy” and, for some unknown reason, fight fans now knew they were about to witness a special scrap. Round one, Penn’s takedown defense was can’t miss as he stuffed all of the then-UFC welterweight champion Hughes’ 7 takedown attempts. In the second stanza, the title fight went to the floor and it was shades of their first encounter as Penn, with less than two minutes in the round, exploded from bottom and took Hughes’ back. From there, “The Prodigy” worked his legs up and squeezed a reverse triangle attempt as well as cranked on an armbar with victory seemingly in his grasp. Hughes gutted out the final seconds and made it to round three, where Penn looked listless from either gassing out or some believe a rib injury. With Hughes on a five-fight unbeaten streak since his first meeting with “The Prodigy,” those first two rounds made it clear again that it was the undersized Penn who still had the tools to beat the eventual UFC Hall of Famer Hughes.

If one needed to see what waiting for five and a half years of revenge looked like, one would only need to see the coaches’ clash from The Ultimate Fighter 5. Back in early 2002, it appeared to be a foregone conclusion that “The Prodigy” would march into the Octagon and, simply, take the title from then UFC lightweight champ Jens Pulver. Instead, Pulver met Penn head-on and the two battled for 25 minutes to the majority decision in favor of “Lil’ Evil.” Half a decade later, the pair of top 155ers had traveled the globe and found themselves set for another scrap inside the Octagon following a season of being rival coaches on TUF. As the rematch was finally underway, “The Prodigy” was clearly on a mission to right this wrong as quickly as possible. Penn shot for takedowns, passed Pulver’s guard, and threatened submissions from the onset. Penn didn’t just want the win; he wanted to make a statement. In the second round, “The Prodigy” did just that by taking Pulver’s back and trapping his left arm in the process, which gave Penn the express lane toward his rear naked choke victory.

Takedown defense! Over the course of Penn’s incredible career, fans got to see what a versatile fighter “The Prodigy” was both offensively as well as defensively. Was Penn a BJJ wunderkind? Yep. Did Penn have knockout power in both hands? Affirmative. On top of that, “The Prodigy” was known for his baffling balance, which was the tentpole for his heralded takedown defense that Octagon regulars can remember UFC Hall of Famer Randy Couture lauding. In Philadelphia, Penn shook off all 15 of Kenny Florian’s takedown attempts over the course of four rounds. 15?! After successfully defending five in that fourth stanza, “The Prodigy” shot for a takedown of his own, which took Florian off his feet and put his back on the mat. From there, Penn masterfully passed through Florian’s vaunted guard while blasting away with some ground and pound. Finally, “The Prodigy” took Florian’s back and sunk in a rear naked choke for Penn’s second UFC lightweight title defense.

Like the rematch with Pulver, it was crystal clear that “The Prodigy” was not letting this opportunity slip through his fingers. In his third bid for the UFC lightweight title, Penn met The Ultimate Fighter 2 winner Joe “Daddy” Stevenson, who was on a four-fight win streak inside the Octagon since his return to the 155-pound division. Maybe Penn hits that hard or it was a sheer intimidation factor, but, two seconds into the bout and one uppercut later, Stevenson was on the ground with “The Prodigy” manhandling him. Penn kept Stevenson on his back with constant top pressure and some fierce ground and pound, with one elbow in particular near the end of the first giving “Daddy” a red mask to wear. The second round featured Penn as a matador and Stevenson as a bull, literally, seeing red (from the blood trickling down his face). “The Prodigy” picked Stevenson apart on the feet with counter rights and lefts until Stevenson crumpled from the punching pressure and succumbed to ground and pound.

Its frenetic final moments have been rightfully immortalized in the UFC’s “Evolution” intro. Although he won the UFC lightweight title earlier in the year, in the eyes of many critics, Penn’s title as “undisputed” champ would only be secured if he bested the belt’s previous owner: Sean “The Muscle Shark” Sherk. With an unbelievable 34-2-1 pro record at the time, Sherk was undefeated at 155 pounds and was on a three-fight win streak prior to his failed post-fight drug test at UFC 73. When the two top 155-pounders collided in May 2008, Penn put on a technical striking showcase, scoring on 69% of his significant strikes. With only seconds remaining in the third round, Penn pushed Sherk toward the cage with punches while “The Muscle Shark” lazily bounced off the cage toward “The Prodigy,” who exploded with a flying knee to Sherk’s defenseless face. Penn cleaned up the fallen Sherk with punches for a TKO as the round came to a close.

Immaculate. Literally, from start to finish, Penn dominated The Ultimate Fighter 1 winner in every capacity on the feet toward Penn’s third UFC lightweight title defense. Offensively, “The Prodigy” landed his heavy hands from the opening moments to the fifth round doctor’s stoppage following Penn’s head kick, which split Sanchez’s forehead in two. Defensively, it was like “The Prodigy” was playing with cheat codes by avoiding 93% of Sanchez’s significant strike attempts and, of course, Penn’s master class takedown defense was in full display by stuffing all 27 of Sanchez’s attempts. Yes, 27. In essence, it’s a 23-minute long 10-8 round, which shows off Penn’s striking brilliance and Sanchez’s granite chin eating it. Punches, kicks, knees, stuffing takedowns, head movement, a full gas tank? “The Prodigy” showed it all.

With good reason, no win in BJ Penn’s career will eclipse this first round rear naked choke win over Matt Hughes at UFC 46. At the time, “The Prodigy” was easily one of the top lightweights in the world following a one-sided beating of Takanori Gomi outside of the UFC, but this fight was at 170 pounds. The UFC welterweight champion Matt Hughes was a wrecking crew, having won 13 straight fights, including five successful defenses of the UFC title. Needless to say, Penn was the underdog prior to the bell, but moments into the bout it was Hughes who appeared in danger early and often. “The Prodigy” quickly stung Hughes with punches, including one that led the then-champ to the floor less than a minute into the bout. With Hughes on the defensive on the ground, Penn almost immediately took Hughes’ back in a scramble, which was foreshadowing what would transpire minutes later. With 30 seconds left, Penn scored a solid punch, jumped into mount, Hughes instinctively spun ,giving up his back, and “The Prodigy” gladly sunk in his hooks. Penn worked over the champ with elbows and punches until Hughes gave an opening for “The Prodigy” to slide in a tap-inducing rear naked choke. It was quick, it was clean, and, once it was over, Penn sealed the win with a kiss on Hughes’ cheek. Without a doubt, there will never be another like “The Prodigy”.