By The Numbers: Super Saturday

urday’s fight cards in Germany and Brazil By The Numbers... 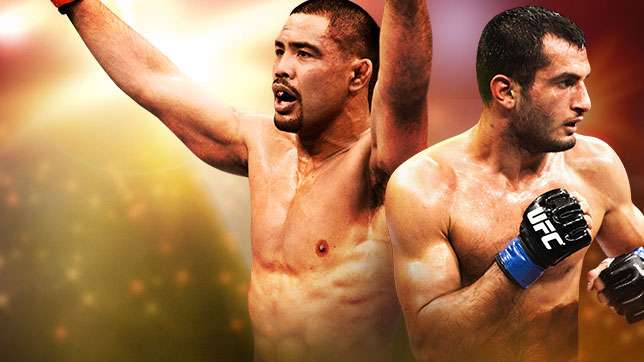 This Saturday, the Octagon will see new and live action in both the Eastern and Western hemispheres as UFC Fight Night: Munoz vs. Mousasi will take place on UFC FIGHT PASS during the day and The Ultimate Fighter Brazil 3 Finale will air on FOX Sports 1 at night. The first event in Germany will feature middleweight main and co-main event matchups as Mark Munoz takes on Gegard Mousasi and Francis Carmont meets CB Dollaway.

In Brazil, Stipe Miocic will collide with Fabio Maldonado, who is making his heavyweight debut, and two new TUF champions will be crowned as well. At middleweight, Team Sonnen fighters will collide as Warlley Alves battles Marcio Alexandre, and at heavyweight, Team Wanderlei’s Antonio Carlos Junior. will scrap with Team Sonnen’s Vitor Miranda.

1298
Days since the Octagon took residence in Germany at UFC 122 and tomorrow night’s UFC Fight Night: Munoz vs. Mousasi

44.9
Percentage of those sig. strikes landed while on the ground by Munoz, 3rd largest proportion among active UFC fighters (min. 350 att.) behind Dong Hyun-Kim at 48& and Chael Sonnen at 52%

52
Significant strikes on the ground landed by “The Filipino Wrecking Machine” against Tim Boetsch at UFC 162, 3rd most ever in a UFC middleweight fight behind Ed Herman’s 53 at UFC 97 and Sonnen’s 72 at UFC 117<br>
51
Percentage of significant strike accuracy for Munoz in the UFC, 4th highest accuracy among active 185ers (min. 5 fights and 350 sig. att.)

9.34
Takedown attempts per 15 minutes of fighting for Munoz, highest among active middleweights

66
Takedown attempts inside the Octagon for Munoz, 4th most in the division’s history

4
Number of main events that Munoz will have competed in for the UFC, including this bout with Mousasi

34
Career wins for Gegard Mousasi across a 40 fight career

85.3
Percentage for Mousasi’s finishing rate of his opponents

26
Finishes in the first round for Mousasi

60
Seconds for Mousasi to score a knockout win and the Strikeforce light heavyweight title in his Strikeforce debut against then champion Renato “Babalu” Sobral, 2nd fastest finish in Strikeforce title history to Ronda Rousey’s 54 seconds

8:28
Average fight time for Mousasi across his last 16 fights

0
Times Mousasi has been stopped via strikes in his career

1.2
Significant strikes absorbed per minute by Mousasi, UFC average is 2.61

10
Career wins by submission for “Limitless,” including back-to-back rear naked choke victories inside the Octagon over Magnus Cedenblad and Karlos Vemola

3.2
Percentage of Carmont’s fight time in the UFC where he has been controlled on the ground

26
Successful takedown attempts for CB Dollaway inside the Octagon, 5th most in UFC 185-pound history

85.7
Takedown defense percentage for Dollaway across his 13 UFC bouts, UFC average is 59%

7
The Ultimate Fighter season Dollaway was a finalist

+155
Betting odds against Dollaway to win the bout against Ferreira

5.18
Significant strikes landed per minute by Stipe Miocic inside the Octagon, 2nd highest rate in UFC 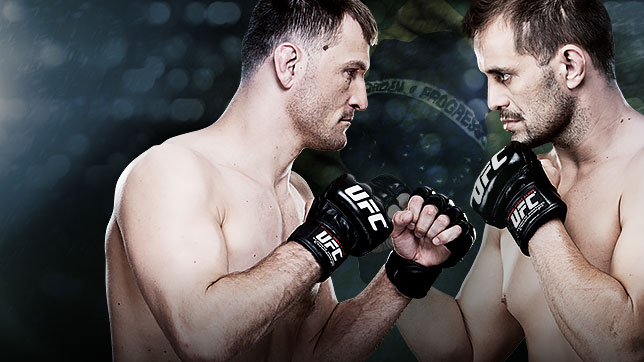 106
Significant strikes landed by Miocic against Roy Nelson at UFC 161 to Nelson’s only 23 in return, 3rd largest differential in sig. strikes in UFC heavyweight history

+1.99
Miocic’s strike differential per minute in the UFC, 3rd best among active heavyweights

132
Significant strikes landed by Maldonado against Gian Villante at UFC Fight Night: Shogun vs. Henderson 2, 2nd most ever landed in a 3 round light heavyweight bout

594
Significant strikes landed by Maldonado inside the Octagon

3
First round stoppages for Antonio Carlos Jr. in the TUF house to get him to the finals, 2 KO/TKOs and 1 submission (rear naked choke)

1
Win each by submission, knockout, and decision for Warlley Alves on TUF to get him to the middleweight finals

3
Finishes for Alves in less than 2 minutes fight time

11
First round finishes for “Lyoto” in his pro MMA career