By The Numbers: Spring Slammers

By The Numbers counts down the best slam artists currently competing in the UFC...

Rustam Khabilov slams Vinc Pichel" title="Rustam Khabilov slams Vinc Pichel" style="width: 300px;" src="https://ufc-video.s3.amazonaws.com/image/photo_galleries/tuf16finale/tuf16finale_05_khabilov_vs_pichel_004.jpg" align="left">Without a doubt, one of the most famous and ardent Octagon enthusiasts is “The People’s Champion” - Dwayne Johnson. When not entertaining in the WWE ring or on the silver screen, “The Rock” is often seen Octagonside at UFC events and, recently, tweeted a picture of himself and UFC president Dana White watching UFC Fight Night: Shogun vs. Henderson 2 together. In honor of the “Brahma Bull’s” birthday, here is a list of the seven fighters who deliver spine-rattling slams that would put a smile on The Rock’s face.

DENNIS BERMUDEZ
Those are more than glamour muscles.
Currently, the #11-ranked featherweight, who is enjoying a phenomenal
six-fight win streak inside the Octagon, has been putting that
bodybuilder’s physique to good use with hard striking and high-impact
slams. The myth that muscled fighters do not have a big gas tank has
either been disproven by Dennis Bermudez or  “The Menace” is the
exception to the rule, as he proved in his last performance against Jimy
Hettes by pouring on 125 significant strike attempts and shooting for
15 takedown attempts in less than a full 15 minutes. The Ultimate
Fighter 14 finalist kicked off this two-year winning streak with a
suplex-savvy spectacle against Pablo Garza, where he scored on eight of
his nine takedown attempts en route to a unanimous decision. 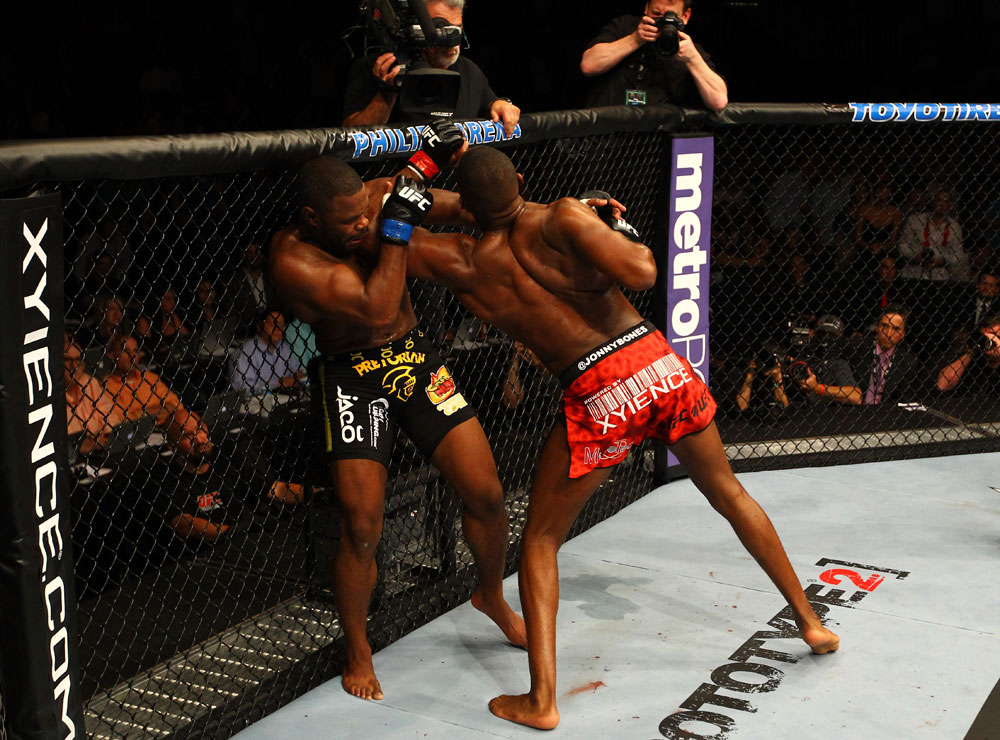 MMA’s pound-for-pound king can do it all,
including toss his opponents. UFC light heavyweight champion Jon Jones’
reach is always on the tip of writers’ and analysts’ tongues, but he
rarely keeps his distance from his opponent. In his seventh and most
recent successful title defense, Jones willingly kept the fight in the
clinch with Glover Teixeira, a place where many believed the challenger
would have the upper hand, but it was “Bones” who bullied his way to
victory with elbows and scoring on 50% of his takedown attempts. What
first caught fight fans’ attention about Jones was his high-arching
takedowns, especially in his scrap against Stephan Bonnar at UFC 94. The
Team Jackson superstar pulled off several beautiful belly-to-back
German suplexes. It should be of no surprise with Jones’ background as a
New York state champion wrestler in high school and a junior college
champion and All-American. He was also making waves on the Greco-Roman
wrestling circuit, nabbing a junior northeast regional championship. The
UFC champ’s reach is, arguably, the toughest hurdle for opponents to
get past, but, once they do, Jones is more than happy to throw his
opponents hard and fast to the ground.

RUSTAM KHABILOV
One of two Dagestani fighters on this
list of human-hurlers, Rustam Khabilov made a jaw-dropping UFC debut by
suplex-slamming Vinc Pichel, then suplex-slamming him again to only take
him for a third and final ride for a first round TKO stoppage at The
Ultimate Fighter 16 Finale. One win via a myriad of suplex slams is
quite enough, but two?! In Khabilov’s return to the Octagon at UFC 159,
“Tiger” hit back-to-back slams on Yancy Medeiros, with the impact
dislocating his opponent’s thumb. With a 17-1 pro record, including
three wins inside the Octagon, Khabilov is climbing the lightweight
rankings and heading into an incredibly high-profile main event bout
against former UFC lightweight champ Benson Henderson on June 7th. One
word of advice for “Smooth” - Khabilov isn’t just trying to take it to
the ground - he’s trying to put you through it. 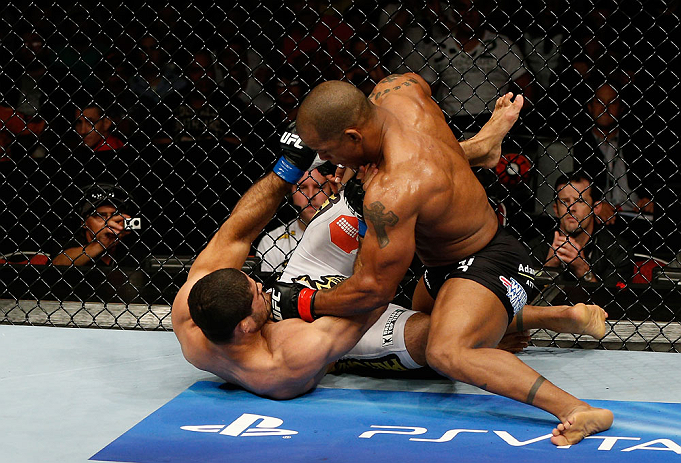 Explosive! If there is one word to describe Hector “Lightning” Lombard’s in-cage abilities, explosive would be it. The welterweight truly announced himself to UFC fans in his past two performances in this new division for him with his devastating knockout of Nate Marquardt followed by his grounding-and-pounding of Jake Shields at UFC 171. Successful on all five of his takedown attempts, the 2000 Cuban Olympic judo player showed off many great trips paired with his trademark power, which whipped Shields to the canvas over and over again. With 19 career KO wins, future opponents knew they had to worry about Lombard’s striking, but “Lightning” has dusted off his judo expertise and is ready to throw his opponents around as well as knock them down.

KHABIB NURMAGOMEDOV
At this moment, the quintessential takedown artist of the UFC is most definitely the undefeated Khabib Nurmagomedov. With an insane 22-0 pro record, including six one-sided performances inside the Octagon, “The Eagle,” who hails from Dagestan, Russia, is more committed to the art of tossing around his opponent than anyone else. At UFC 160, Nurmagomedov set the UFC record for most takedowns completed with 21 on 27 attempts. Just last month at UFC on FOX, he imposed his slamming will on top-ranked Rafael dos Anjos for three rounds, scoring six of 12 takedowns to net another win and move himself one step closer to a title shot.

YOEL ROMERO
If worrying about his head-spinning
knockout power wasn’t enough, 2000 Cuban Olympic silver medalist in
freestyle wrestling Yoel Romero remembers how to take people down with
authority as well. At UFC on FOX: Henderson vs. Melendez, “Soldier of
God” made his UFC and middleweight debut with an incredible flying knee
knockout. The American Top Team product followed that performance up
with back-to-back third round knockout wins, which improved his pro
record to 7-1 with all wins by KO finish. Just a few weeks ago, Romero
kicked off the UFC on FOX: Werdum vs. Browne card by slamming his way to
a one-sided decision victory over technical striker Brad Tavares, who
was on a five-fight win streak and had displayed great takedown defense
previously. In his first three UFC bouts, Romero had no successful
takedowns on only five attempts, but he got back into the groove with
seven successful slams on 12 attempts against Tavares. 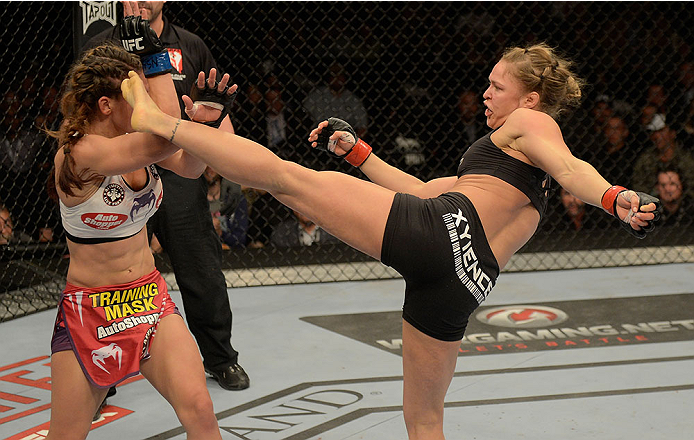 If she gets her hands on you, UFC women’s bantamweight champion Ronda Rousey is sending you for a ride. At UFC 168, the “Rowdy” one delivered a series of artistic and punishing slams to challenger Miesha Tate. It’s not shooting-in for a double and gutting out a takedown against the fence, but Rousey launches her opponent’s body and her own body into the air in these 360 tilt-a-whirl maneuvers all guided by the 2008 US Olympic judo bronze medalist’s hips. Whether she is facing her opponent, has her back to her opponent, right side, left side, double underhooks, double overhooks - Rousey is a Swiss Army knife of throws that will always result in her opponent hitting the mat with the full weight of the champion on top.

Watch these seven fighters battle inside the Octagon only on Fight Pass! >>