By The Numbers - Previewing Invicta FC 9 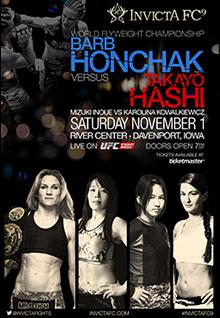 This Saturday, Invicta FC is switching things up by hosting its first event away from its Kansas City home at the RiverCenter in Davenport, Iowa.

To catch everyone up to speed on these exciting 10 fights that will be on UFC FIGHT PASS on November 1st, here’s a rundown of the full Invicta FC 9 card:

It seems so familiar to see a Miletich Fighting Systems product with a gold belt around their waist and such is the case with Invicta FC’s inaugural flyweight champ Barb Honchak. Riding an incredible eight-fight win streak, “The Little Warrior” has enjoyed the taste of victory in Invicta FC four times, including winning the title and successfully defending it in a wild Fight of the Night performance last December against Leslie Smith.

Attempting to overtake Honchak’s top spot is Japanese MMA star Takayo Hashi. With a 15-4-1 pro record, Hashi has been a fixture in her home country’s MMA scene for the past decade and recently nabbed another organization’s title via third round TKO - the first striking stoppage of her career.

Expect this title clash to be fought tooth and nail everywhere.

This co-main event is going to be good! 20-year-old Mizuki Inoue is one of the most exciting prospects in women’s MMA with some of the best pure boxing on the feet and a litany of armbar submission wins on the ground. Inoue’s first Invicta FC bout was a three-round war with The Ultimate Fighter 20’s Bec Rawlings, which Inoue won by unanimous decision. Meeting Inoue in this strawweight struggle is Poland’s undefeated Karolina Kowalkiewicz, who is making her promotional debut. Fighting out of Gracie Barra Lodz, Kowalkiewicz owns 3 of her 5 pro wins via first round finish, including an armbar over Invicta FC vet Jasminka Cive in May.

The smallest fighter on the card is set to make a big US debut, as Brazil’s Herica Tiburcio collides with Japan’s Ayaka Hamasaki. At only 4’11”, it’s no surprise Tiburcio does most of her damage taking her opponents to the ground by securing 6 of her 8 pro wins by submission. Tiburcio is taking on the 10-1 Hamasaki, who has gone 1-1 in previous Invicta FC scraps. Hamasaki owns 4 of her 6 stoppage wins by sub, so don’t be surprised to see either of these grapplers hunting for the Submission of the Night bonus.

Kaitlin Young has traded fists and feet with just about every notable female mixed martial artist of the past decade. Although her career has been on a recent skid in Invicta FC, Young has been battling with some of the best bantamweights like Liz Carmouche, and she recently started training with UFC women’s bantamweight champ Ronda Rousey. Originally scheduled to take on Cindy Dandois, Young’s fan-friendly stand-up style will now clash with the returning Raquel Pa’aluhi. Hawaii’s “Rocky” owns two of her three pro wins via punches, which should make for fireworks against Young.

It will be a matchup of an atomweight pair of real Invicta FC vets as Nicdali “The Night Queen” Rivera-Calanoc tangles with Jodie Esquibel. Both scrappers have competed for the company three times, with the latter going 2-1 and the former going 1-2. The Night Queen, with her 15 pro fights, will be by far the most experienced opponent of Esquibel’s young career as the Team Jackson product will look to use her coiled-spring explosiveness against Rivera-Calanoc’s bad attitude brawling style.

Splitting the difference in her first two Invicta FC appearances, “Lightning” Liz McCarthy earned a unanimous decision win in May in another organization and is ready to prove herself again in this atomweight contest. The Team Quest product who owned several exciting endings in her amateur career will tangle with the Invicta FC debuting Amber “The Bully” Brown. Fighting out of Fit NHB in Albuquerque, The Bully owns a 2-1 pro record and will be making her return to MMA action for the first time since a July 2013 armbar win over Kikuo Ishikawa in Japan.

After dropping her first two pro fights, including a decision loss at Invicta FC 4, “The Lady Killer” Amanda Bell has dazzled with back-to-back finishes in 2014. The Oregon native loves pushing the pace while going for a stoppage, which was seen in her finish-friendly amateur career. In her return to Invicta FC, The Lady Killer will collide with Denmark debutant Maria Hougaard-Djursaa. With a 5-5 pro record, Hougaard-Djursaa has won three of her last four fights with each win via stoppage. This featherweight fracas could be a sleeper pick for Fight of the Night.

She may sound like a Spider-Man villain, but Shannon Sinn is a former track star who turned her competitive sights to MMA. With two pro MMA bouts under her BJJ purple belt already this year, Sinn is 1-1 with a sub 60-second armbar win in her pro debut. Sinn’s first flyweight fight in Invicta FC will see her go against the scintillating striking of Andrea “KGB” Lee. With an acclaimed background in Muay Thai kickboxing and as a Golden Gloves boxer, Lee scored a pro MMA debut KO in 10 seconds a couple months ago. KGB will no doubt want to keep this fight on the feet for another highlight reel ending.

Not unlike The Ultimate Fighter contestants battling to get a UFC contract, Jamie Moyle won her spot on this card by winning an amateur tournament in Las Vegas earlier this year. The Syndicate MMA strawweight makes her pro debut by being thrown into the deep end against fellow Invicta FC first-timer Jenny Liou Shriver. Owning a PhD in literature and a 2-0 pro record, Shriver is a lifelong BJJ practitioner who ran track in college and took home her first pro MMA win via second round TKO.

Long and lethal limbs will be flying as the 5’9” “Killer” Kelly McGill throws down with the 5’11” Maegan “Mayhem” Goodwin. In June, McGill scored a TKO via punches only 93 seconds into her first pro bout, which adds to the growing list of quick striking stoppages Killer earned as an amateur like the seven-second one she had last year. Meanwhile, the 22-year-old Goodwin will be making her pro debut in this bout after racking up several Ws and 0 losses as an amateur.