By The Numbers – The Most Prolific Heavyweight Strikers 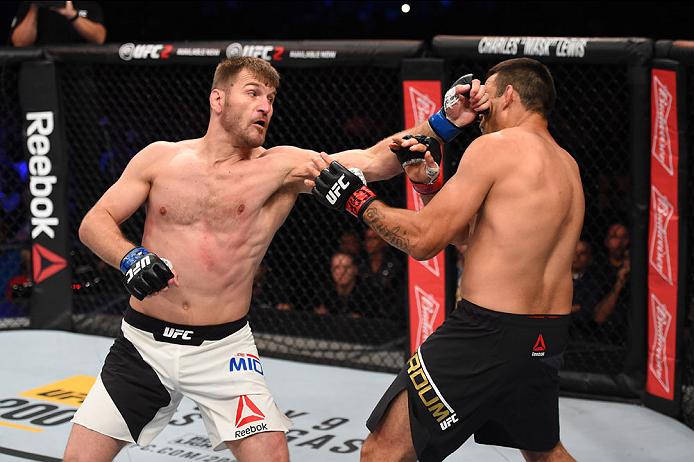 Last weekend at UFC 198, Stipe Miocic scored a first-round knockout of Fabricio Werdum to become the UFC heavyweight champion. Whether it is one or one hundred punches needed to win, Miocic has proven he is one of the most prolific heavyweight strikers in Octagon history.

In honor of our newest UFC champ, here are the top ten UFC heavyweights who have landed the most significant strikes inside the Octagon.

If you knew one thing about Joey Beltran, it was that his nickname - “The Mexicutioner” - ranks as one of the all-time greatest monikers. The second thing, Beltran loved a brawl. The two-time Fight of the Night winner threw strikes with reckless abandon and welcomed his opponent to as well. Outside of his second-round TKO over Rolles Gracie in his Octagon debut and his quick KO loss to Lavar Johnson, Beltran landed at least 50 significant strikes in all of his UFC bouts, including some truly memorable melees with Matt Mitrione, Aaron Rosa, and the current UFC heavyweight champ Miocic. Not to mention, Beltran did drop down to 205 pounds and have three more slugfests for an additional 195 significant strikes.

It’s almost impossible to have a UFC all-time list and not see Randy “The Natural” Couture on it. The former three-time UFC heavyweight champion began his storied Octagon 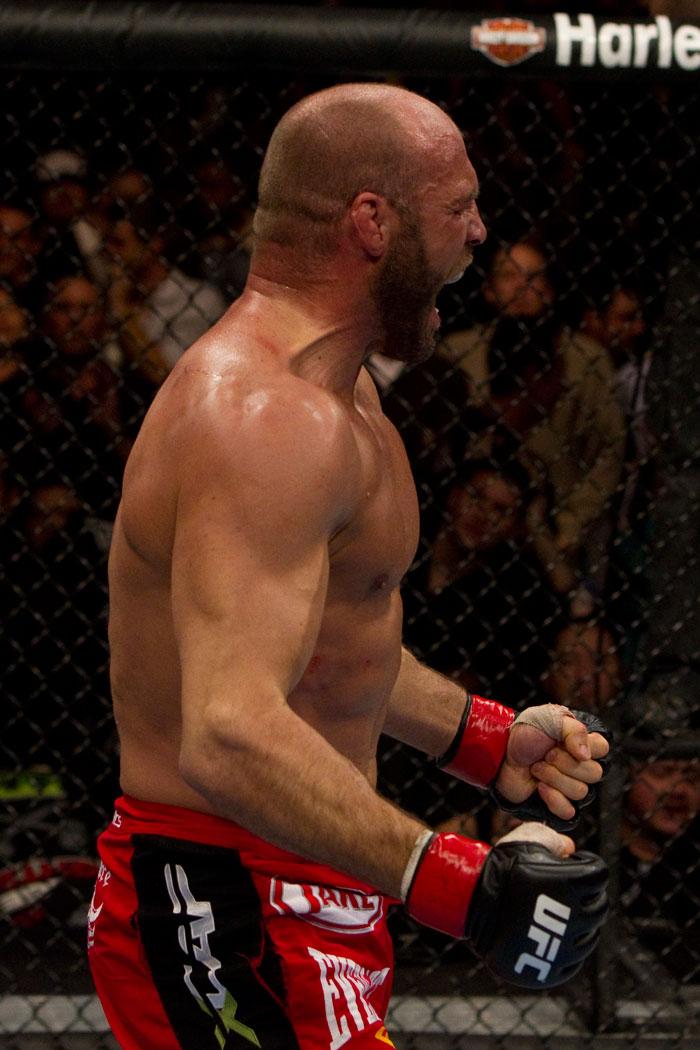 career in 1997 and continued to be either a champ or challenger for the next 14 years. The 392 significant strikes landed only account for half of his UFC output, as Couture would drop down a division to become the two-time UFC light heavyweight champion. While a wrestler by trade, Couture’s striking continued to evolve, with two of his best Octagon performances coming at 43 and 44 years old. The former was The Natural’s master class against Tim Sylvia at UFC 68, where Couture won the belt by scoring 73 significant strikes, with about half on the feet and half on the floor. The latter was Couture’s dirty boxing clinic against Gabriel Gonzaga at UFC 74, where Couture defended the belt by scoring nearly 70% of his 63 significant strikes in the clinch en route to a third-round TKO.

It’s amazing to think that Stefan Struve just turned 28 years old and the “Skyscraper” recently competed in his 17th UFC bout. The fresh-faced Dutchman who towers at nearly seven feet tall has been a UFC stalwart for the past seven years, with many memorable scraps, only three of them ever making it to the judges’ scorecards. If anything, we might be only seeing the tip of the iceberg with Struve’s striking, as the lanky heavyweight mostly used his length for submissions for the first half of his Octagon career. He didn’t need many significant strikes to fell Antonio Silva in his most recent 16-second KO of “Bigfoot” at UFC Fight Night: Overeem vs. Arlovski. While that was a great win, Struve’s most impressive UFC victory is probably his come from behind Fight of the Night-winning knockout of current UFC champ Miocic back in 2012, where the duo combined landed 102 significant strikes in just two rounds of non-stop action.

It’s really a credit to the former UFC heavyweight champion’s longevity that Andrei Arlovski is on the list, because “The Pit Bull” is pretty much the most dangerous one-punch knockout artist the Octagon has seen in the division. Arlovski’s significant strike count had to scratch and claw its way up to this 429 total, as he owns nine UFC wins with less than 20 significant strikes each. Arlovski rarely lands more than 30 significant strikes in a bout as his fights even more rarely go more than a round or two, whether he is winning or losing. He is tied with fellow former UFC heavyweight champ Cain Velasquez with nine knockout wins inside the Octagon, which is the most in the division’s history.

It’s MMA, not BJJ. Most should and do associate the former UFC heavyweight champion with his vaunted grappling skills, but Fabricio Werdum is an aggressive and creative striker. Sure, his throw first and often approach got him in trouble against Stipe Miocic at UFC 198, but it is also the backbone of his six-fight win streak inside the Octagon that won him the UFC belt in the first place. Actually, Werdum’s much maligned first stint in the UFC featured a 2-2 record, with both wins by TKO. Nevertheless, in his return, Werdum has pressured his opponents and dominated them with his ever-improving Muay Thai skills. Werdum out landed Roy Nelson more than 3:1 with significant strikes in their Fight of the Night bout and Werdum landed 120 signficant strikes against Travis Browne in their main event clash back in April 2014. It was Werdum’s superior offense on his feet that drove former champ Cain Velasquez to shoot on Werdum at UFC 188, which ended moments later with Werdum cinching up a guillotine choke.

It was destined to happen sooner or later that Stipe Miocic would get his UFC heavyweight title fight chance, and he crushed it. The new UFC heavyweight champion is a scary blend of one-punch power and limitless cardio. Miocic is the only UFC heavyweight to score three KOs in under a minute each, and he has recorded one of the latest stoppages in the division’s history against Mark Hunt at 2:47 into the fifth round. Like former champs Velasquez and Dos Santos, Miocic has a litany of lightning quick finishes as well as grinding battles where he’s landed in excess of 100 significant strikes in each. It only took Miocic 31 significant strikes combined to defeat both Werdum and Arlovski, but Miocic had the gas tank to land 113 significant strikes on Mark Hunt. Most likely, Miocic will leapfrog into at least third place on this list in his first defense of the UFC belt.

The French heavyweight with a kickboxing background was an enigma. Cheick Kongo fought a grand total of 18 times inside the Octagon with a solid 11-6-1 UFC record. While he was an imposing figure with power in both his punches and kicks, most of Kongo’s best work came with his elbows or knees in the clinch or on the ground. At 6’4” with a mighty long reach, Kongo scored two of his best “fighting in a phone booth” wins over Antoni Hardonk and Paul Buentello. Kongo also had a knack for tying up highlight reel-ready strikers like Shawn Jordan, Travis Browne, and Matt Mitrione and making them work against the fence toward favorable results for Kongo. While he never made it to the big title fight, Kongo was a tough test for any and all with his physical stature to punish at range and his inclination to tenderize in the clinch. 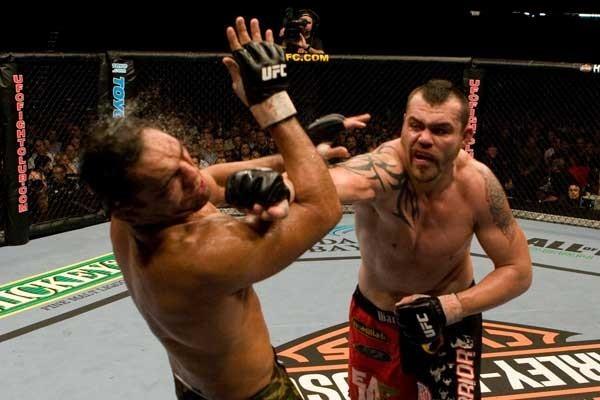 Without a doubt, Tim Sylvia was one of the most successful UFC heavyweights. The former two-time UFC heavyweight champion pulled off the ultra-rare two consecutive title defenses, which has only been accomplished by Couture, Brock Lesnar, and Cain Velasquez. The 6’8” frame and 80-inch reach of “The Maine-iac” peppered and punished opponents at range for six years inside the Octagon. Unquestionably, the most beguiling significant strike total out of Sylvia came in his UFC debut against Wesley “Cabbage” Correira, where The Maine-iac tested Correira’s famed granite chin by landing 138 significant strikes in less than seven minutes en route to a second-round TKO. Whether at range, as he preferred, or against the fence, Sylvia was an active striker who helped define the UFC heavyweight division for much of the 2000s.

The current era of heavyweights was ushered in by the final two names on this list, with the first being former two-time UFC heavyweight champion Cain Velasquez. The former NCAA Division I All-American wrestler out of Arizona State University has been a conveyor belt of kicks, punches, and takedowns since he made his Octagon debut at UFC 83. With 11 UFC wins, including nine knockouts across 13 performances, Velasquez doesn’t give his opponents anything other than a chance to react as he pours on an average of over six significant strikes landed a minute, which is a UFC heavyweight record. Velasquez has crossed the 100 significant strikes landed threshold twice in his two wins over Junior Dos Santos, and he maintains a UFC record strike differential of outlanding his opponents with 3.92 significant strikes a minute. As he aims to get back on track toward a title shot with his upcoming UFC 200 bout against Travis Browne, Velasquez has been an excellent example and leader of what is to be expected from the UFC heavyweight division – in shape monsters who pressure for finishes from beginning to end. 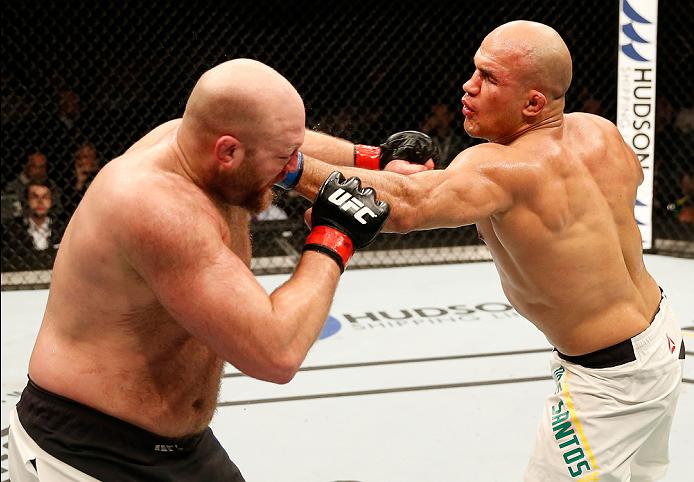 The yin to Velasquez’s yang is no doubt his famed rival and former UFC heavyweight champion Junior Dos Santos. Like his previously mentioned counterpart, “Cigano” can obliterate with a single strike, like he showed with his Octagon debut uppercut KO of Werdum or his magnificent spinning heel kick KO of Hunt. But Dos Santos is just as dangerous in a five-round punchathon. On three separate occasions, the Brazilian bomber has landed more than 100 significant strikes inside the Octagon. In his unanimous decision wins over Ben Rothwell and Miocic, Dos Santos landed an incredible number of his precision punches to his opponent’s body. Against Rothwell specifically, Dos Santos’ career best 157 significant strikes saw 58% of them attacking Rothwell’s body, with Cigano landing those shots at a frightening 92% accuracy rate. The current roster of heavyweights is raising the bar with each and every outing, and it will be incredibly exciting to see what they have in store next.