By The Numbers - MMA Goes Hollywood 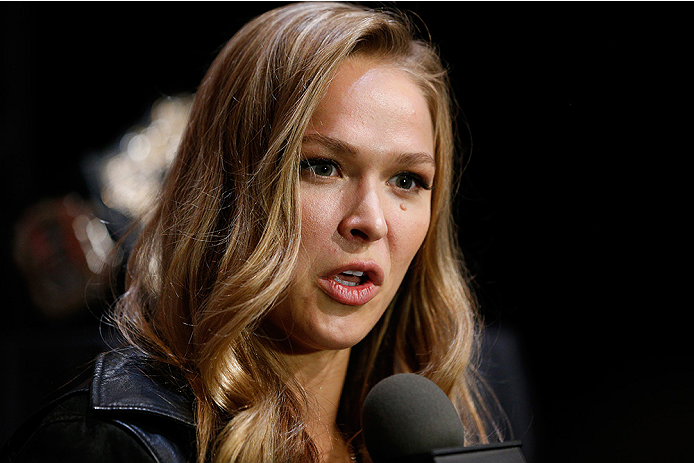 On August 15th, UFC women’s bantamweight champion Ronda Rousey hits the silver screen in The Expendables III alongside some of the greatest action heroes in film history. And while she can’t match filmographies with her action movie co-stars Sylvester Stallone or Jason Statham – at least not yet - the “Rowdy” one could most definitely flip them over her head and slap on an armbar before either of them could say “2008 US Olympic bronze medalist in judo”.

In honor of Rousey’s first feature film, here are some of Hollywood’s most memorable attempts at portraying real submissions or a ground game in some likely and unlikely movies.

The late Paul Walker was not only fascinated by Brazilian Jiu-Jitsu, but was a practicing brown belt under Paragon Brazilian Jiu-Jitsu’s Ricardo “Franjinha” Miller and was awarded his black belt posthumously. Walker liked to sprinkle in as much jiu-jitsu as he could in his movies, like when his franchise character Brian O’Conner used a defensive guard and a guillotine choke to pacify his angry friend Roman Pearce, played by Tyrese Gibson. While not a real submission attempt, O’Conner demonstrates how not to take any damage from the bottom, as well as how he can control Pearce by closing his guard and wrapping up a headlock.

Even more surprising, an omoplata appears - yet again - in this vampire hunting trilogy. In a climactic battle between sidekicks, Ryan Reynolds as Hannibal King goes toe-to-toe with the supernatural powers of vampire Jarko Grimwood played by the WWE’s Triple H. As King gets thrown around by Grimwood, there’s a blast of BJJ, with King shooting for an armbar, getting it, and then switching positions to turn it into an omoplata. Grimwood does not tap and King breaks the arm. Seconds later, Grimwood realigns his broken arm using his vampiric powers and the fight continues - of course.

BLOOD ON THE SUN

James Cagney loved him some judo. The black & white screen legend was a judo black belt and showed those tools of the trade in many of his gangster movies, including a sode guruma jima or Ezekiel choke in White Heat. But there is no comparison to the judo spectacular that is Blood on the Sun, which features a must see knock down, drag-out brawl between Cagney and his real life judo instructor John Halloran. The climactic battle sees Cagney’s Nick Condon, who is shown earlier in the movie training judo, tangle with the evil Captain Oshima, played by Halloran. The two proceed to throw each other around like rag dolls before they end up on the ground, where Cagney attempts a myriad of moves. Cagney first goes for an armbar, scrambles to Oshima’s back, and then sinks in a collar choke. Amazingly, the fight does continue and turns into a striker’s showcase for Cagney.

One of the most famous martial arts movies of all-time began with what looked like an Octagon-less UFC bout. The legend himself, Bruce Lee, kicked off his masterpiece with an exhibition match including MMA gloves. After he demonstrated he was the superior striker, Lee rattled off a few wrist throws before following his opponent to the floor to roll him up into a crucifix submission.

In the highly memorable nine-minute striking battle in Way of the Dragon between Lee and Chuck Norris, Lee finishes off a battered Norris with a standing guillotine choke.

As the sequel begins where the original ended, Daniel (Ralph Macchio) and Mr. Miyagi (Pat Morita) are celebrating the unlikely karate tournament win when they overhear, then see, Cobra Kai dojo’s maniac leader John Kreese (Martin Kove) beating up his own pupils. Obviously, Mr. Miyagi cannot idly stand by, so he intervenes on the behalf of the wayward Johnny Lawrence (William Zabka). Finally, Kreese faces Miyagi in an Emperor Palpatine vs. Yoda like matchup.

Of course, Kreese aims to strike first with anger, but Miyagi is too quick and too aware of his surroundings for Kreese. Miyagi swiftly dodges Kreese’s strike to allow the fist to go untouched right through a car window. With one fist injured, Kreese attacks with his other hand and Miyagi deftly dodges that punch into another car window. Like a lesson from The Book of Five Rings, Miyagi has taken Kreese’s weapons away and then moves in for his possible first and final attack - a honk on the nose.

Traditional martial arts at its best.

After nearly two hours of car chases and shoot outs, there was only one way renegade cop Martin Riggs (Mel Gibson) would feel satisfied in dispensing with the evil Joshua (Gary Busey) once and for all: a street fight. With Murtaugh (Danny Glover) cheering from the sidelines, Riggs and Joshua work each over on the feet before their scrap hits the floor, aka some suburban family’s water-soaked front lawn. Riggs gets the advantage early, but is a bit overconfident and misses on an armbar. Turning the tables, Joshua scores some ground-and-pound from inside Riggs’ guard. But the coup-de-grace is Riggs shooting his legs up for a tussle-ending triangle choke.

Actually, Rorion Gracie was a special Brazilian jiu-jitsu technical advisor for this movie, which was seven years prior to him helping start the UFC. A couple other notable triangle chokes in movies: Gina Carano has an excellent fight scene with Michael Fassbender in Haywire that ends with a triangle choke, and Tom Cruise triangle chokes “himself” in Oblivion.

Who could have ever guessed they would see the “Raging Bull” pull off an armbar? Crossing ankles “controversy” aside, Robert De Niro as crazed father-in-law Jack Byrnes chases Ben Stiller’s hapless Greg Focker on to a children’s playground. Eventually, the two tumble down a slide with De Niro ending up on top and latching on an armbar. The degree of difficulty of hitting a juji gatame on a kid’s slide at any age, let alone at 67 years old, is pretty astounding.

In a movie about gigantic aliens fighting gigantic robots, it should have come as a surprise to us when Jax from Sons of Anarchy hit an omoplata. Protagonist Raleigh, played by Charlie Hunnam gets into a hallway tangle with a fellow robot pilot, which comes to its conclusion as Raleigh nimbly rolls for said shoulder lock.

Much of hand-to-hand combat in the movie was Wing Chun-inspired, but audiences did get to see some ground work employed to beat the giant Dredger (Robert Mallet). Definitely not legal inside the Octagon, Sherlock Holmes, played by Robert Downey Jr., and Dr. Watson, played by Jude Law, tag teamed Dredger with submission holds once they got the big man down. Holmes locked up an armbar while the Dr. took back mount and wrenched a collar choke.

UFC fan and Aikido master Steven Seagal has shown countless wristlocks, throws, and disarming techniques in his many movies, but one moment that should stand out for fight fans is when he defeated sixth degree BJJ black belt John Machado on a runaway train. Actually, the youngest of the famed Machado brothers has appeared in many movies, including Redbelt - a complicated drama with a through line about BJJ. Back to the point, Seagal, as the world’s most dangerous chef Casey Ryback, and Machado battle at close quarters, with the two ending up on the floor and Seagal scoring some ground-and-pound from mount. Eventually, Machado gives up his back - seems unlikely - and Seagal sinks in a rear naked choke with proper form no less (hand behind the head).

Arguably, the sloppiest rear naked choke in cinema goes to Meatloaf in Fight Club when he applies a loose approximation of the familiar hold on Edward Norton.