By The Numbers: A Look at Sydney and Uberlandia

Breaking down Saturday’s fight cards in Stockholm and Halifax By The Numbers... 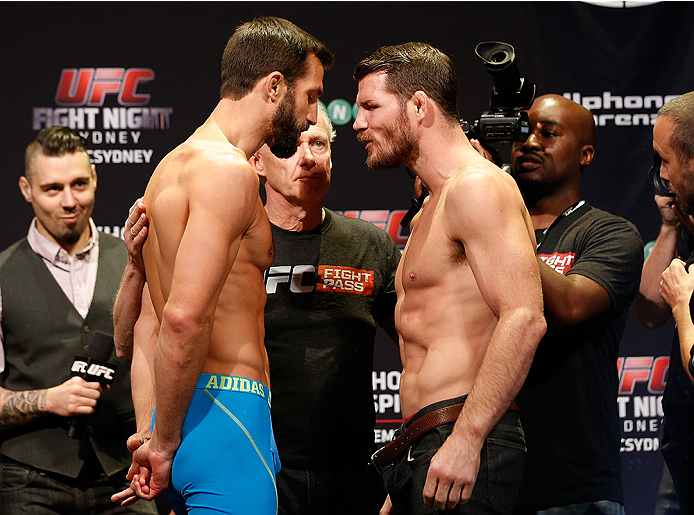 Tonight, UFC Fight Night: Rockhold vs. Bisping will take place on UFC FIGHT PASS, and on Saturday UFC Fight Night: Shogun vs. Saint Preux will air on FOX Sports 1. Here's a look at this weekend's fight cards in Sydney and Uberlandia By The Numbers...

5
Current ranking for Luke Rockhold as a UFC middleweight

151
Seconds it took for Rockhold to score a TKO via body kick against Costas Philippou in January at UFC Fight Night: Rockhold vs. Philippou

100
Percentage of those stoppage wins occurring in the first round, most 1st round finishes in UFC/Strikeforce combined history since the creation of the five minute round

100
Percentage of Rockhold’s nine Strikeforce bouts that he won, 3rd most wins in Strikeforce history

11
Wins by Bisping inside the Octagon, tied for 4th most in UFC middleweight history

896
Significant strikes landed by The Count, most in UFC middleweight division history

9
KO/TKOs by Bisping in UFC competition, tied for 4th most in UFC history

>100
Number of significant strikes landed by Bisping in two UFC bouts against Yoshihiro Akiyama and Jason Miller, only UFC middleweight to land more than 100 sig. strikes in a single fight twice

5.26, 5.66
Significant strikes landed rate by Bisping in rounds 2 and rounds 3 are the highest 2nd and third round rates among active UFC middleweights

155
Weight class Ross “The Real Deal” Pearson returned to in December 2012 and has fought five times since resulting in three KO/TKO wins, most recently a second round stoppage over Gray Maynard in August

5
Knockdowns by Pearson as a lightweight in the UFC, 10th best among active UFC lightweights

100
Percentage of Pearson’s previous two UFC appearances fought in Australia, which The Real Deal has won - unanimous decision against Spencer Fisher and a TKO of George Sotiropoulos

15
The Ultimate Fighter season “Raging” Al Iaquinta was a finalist

4:44
Time in the first round of Iaquinta’s quarter finals TUF bout against Andy Ogle where Raging scored a TKO stemming from a standing elbow

6
KO/TKOs by Shogun in the UFC, tied for 2nd most in UFC’s light-heavyweight division behind Chuck Liddell’s 9

9
KO/TKOs by Rua in PRIDE

9
Knockdowns by Rua inside the Octagon, 3rd most knockdowns in UFC light-heavyweight history

191
Total strikes landed by Shogun against Dan Henderson in their epic war at UFC 139, 5th most ever landed in a single UFC light-heavyweight fight

3
Finishes for OSP in the UFC including 2 submissions, 1 knockout and a Performance of the Night bonus

51.2
Significant striking accuracy for Saint Preux in his UFC/Strikeforce bouts, UFC average is 42%

43
Leg kicks landed by Uncle Creepy in his bout against Santos, most in UFC flyweight history

11
Months after UFC 163, Uncle Creepy returned to the Octagon and earned a unanimous decision win over Brad Pickett

90
Takedown defense percentage by McCall in the UFC, stuffed 27 of 30 attempts including all 10 of Pickett’s attempts

6
Current ranking by John Lineker as a UFC flyweight

7
Knockdowns scored by Lineker, most in UFC flyweight history

4
KO/TKOs by Lineker inside the Octagon including a third round stoppage of Alptekin Ozkilic in July, most in UFC flyweight history