By The Numbers - The Knockouts of October 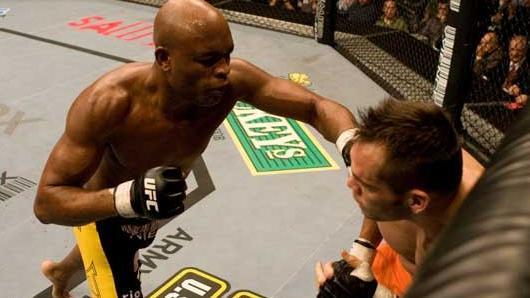 With new Octagon action still a week away, let’s take a look back at 10 of the most thrilling and chilling UFC knockout finishes from Octobers past, which are all available on UFC Fight Pass.

Way back in 1998, two hard-hitting heavyweights stole the show on the Octagon’s first trip to Brazil. Riding a two-fight win streak in the UFC at the time, David “Tank” Abbott was a very dangerous veteran who the year earlier had fought for the UFC heavyweight title against then-champ Maurice Smith. But the brawling Tank was about to hit a roadblock in undefeated UFC newcomer Pedro “The Rock” Rizzo. With his background as a Marco Ruas protégé, Rizzo would use brutal leg kicks and hard straight punches to break Tank down. When The Rock scored the final punch that dropped Abbott, a stream of excited Brazilian teammates and Bas Rutten hopped the Octagon fence to literally hoist Rizzo on their shoulders in celebration.

It is simply crazy to think that these two were even in the same weight class. Before he wised-up and started making waves as a light heavyweight, Anthony “Rumble” Johnson competed 10 times as a welterweight (or tried to because he did miss the 170-pound limit twice) in the UFC, with his last matchup against Charlie Brenneman in 2011. While Johnson has gone up two weight classes since those days, Brenneman has actually dropped 15 pounds and currently fights at lightweight. In Washington D.C. with both making the required weight the day prior, Rumble delivered a terrific left head kick halfway through the first round, which netted Johnson a Knockout of the Night bonus.

No one could have guessed this ending. Previously known as a solid judo player with a smothering top game, Dong Hyun Kim scored a huge overhand left to fan favorite Erick Silva’s mug halfway into round two that silenced the Brazilian crowd. Up until that one punch KO, Kim hadn’t won by stoppage in the over five years since his Octagon debut TKO at UFC 84. The explosive ending nabbed the Knockout of the Night bonus and showed the birth of a lot more aggressive “Stun Gun”.

Nine consecutive wins, eight via punches, four in the first round and the UFC heavyweight title around his waist - that is how Cain Velasquez’s pro MMA career looked after UFC 121. In another steamroller-style performance, Velasquez attacked and attacked then-champion Brock Lesnar head on and, eventually, he finished him. Relentless on the feet and on the ground, Velasquez punched and continued to punch Lesnar until he dropped the big fella and pounded him out for the stoppage. Velasquez did go on to lose the title in his first defense to Junior Dos Santos, but he quickly regained the belt a year later and has successfully defended it twice since.

The knockout was great, but the celebration shuffle was fantastic. Earlier this month, the reserved Rory “Ares” MacDonald finally let his hair down a bit immediately following his left hook into ground-and-pound win. Taking on former Strikeforce welterweight champion Tarec Saffiedine, MacDonald seized the statement stoppage he had been searching for in the third round of his first UFC main event. Long considered one of the very best in the division, MacDonald silenced critics by recording the first ever KO loss on Saffiedine’s record, which solidified Ares as the number one contender to the UFC welterweight crown.

It’s the fastest finish with UFC gold on the line. After an exciting card filled with stoppages, UFC 55 took it to the next level by throwing two heavyweight knockout artists into the Octagon and putting the title up for grabs. No one in the arena or watching at home was expecting “The Headhunter” and “The Pit Bull” to go the distance, but 15 seconds? Arlovski has always had a preternatural talent for finishing fights quick, but with one overhand right - Buentello was out and asleep.

Remember #8 on this list? Take that scenario and put it in England and multiply the intensity of it by 100. With the crowd at the 02 Arena in London on its feet and worked into a frenzy, their countryman Dan “The Outlaw” Hardy was set to clash with “The Natural Born Killer” Carlos Condit, who had the audacity to use Jimi Hendrix’s version of the “Star Spangled Banner” as his entrance music. After four and a half minutes of the two big welterweights testing each other on the feet, both Condit and Hardy dug in and exchanged left hooks and it was the American who won out. A stunned crowd, an exhilarated Condit and a memorable finish for the highlight reels.

The matchup was always speed vs. power, but, in the end, speed scored the knockout. In the follow-up rematch to one of the greatest Octagon clashes of all-time at UFC 125, then-UFC lightweight champion Frankie Edgar was going to battle Gray Maynard for the third time. The first three rounds in Houston played out eerily similar to their bout 10 months earlier in Las Vegas, but it was in the fourth round that Edgar took the upper hand by catching Maynard with a short right out of a scramble. The stunned Maynard fell back towards the fence, where Edgar continued to catch his foe with rights and then lefts until the referee pulled him off.

Without a doubt, one of the most impressive debuts in UFC history was Junior Dos Santos’ thunderous uppercut KO of Fabricio Werdum. For months in the lead-up, former UFC interim heavyweight champion Antonio Rodrigo Nogueira laid the groundwork for the Dos Santos hype train, saying he was the next heavyweight great. Most simply wrote it off as a teammate talking up another teammate, but Dos Santos made his presence known with authority as his right fist exploded upward and took out the ultra-tough Werdum. Still to this day, no one has done anything similar to Werdum, who has four consecutive and dominant wins in the UFC and will be fighting for the UFC heavyweight title in November.

Everyone knows New York Yankees’ legend Reggie Jackson is “Mr. October,” but former UFC middleweight champion Anderson Silva sure seemed like it was his lucky month as well in 2006 and 2007. It’s really too difficult to decide which of these knockouts was better as “The Spider” really laid the framework for his legend by winning the UFC title from Rich Franklin and then poured in the concrete a year later finishing “Ace” for the second time. Prior to Silva, Franklin was undefeated inside the Octagon with a belt around his waist and two defenses under it.

At UFC 64, Silva manhandled Franklin in a Muay Thai clinch like absolutely no other. The Spider ended Ace’s streak with about a dozen or so knees and one well-placed head kick. One year removed, the two were inside the Octagon with the title on the line again, and Silva was raining down knees until Franklin was finished a second time.