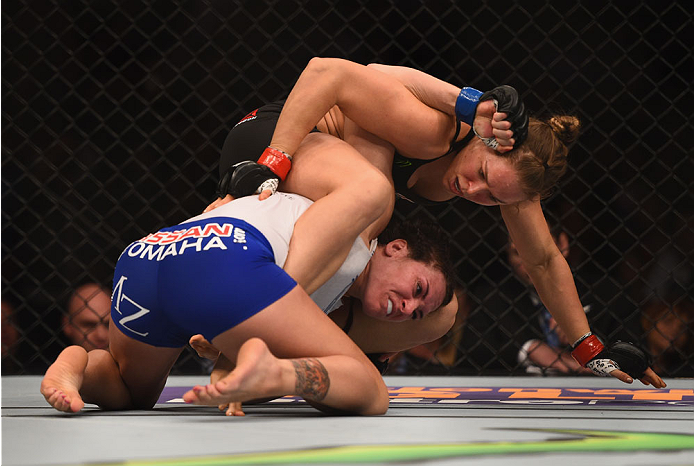 In honor of “Rowdy” Ronda Rousey’s latest first-round finish over Cat Zingano at UFC 184 and thanks to the gang at FightMetric, here are the top 10 active fighters boasting the shortest average fight time with a minimum of five fights inside the Octagon.

UFC fighters are not getting paid by the minute, least of all the heavyweights. So, of course, there are a few big fellas on this list, with the first being knockout artist Matt Mitrione. The Ultimate Fighter 10 alum has fought all 12 of his pro bouts inside the Octagon with a 9-3 record as a result, including a three-fight win streak, all by first round KO. It’s a rarity to see him venture outside of the first round and he hasn’t seen one in four years. This coming June, expect to see Mitrione aiming to lower his average fight time as he trades fists and feet with fellow finisher Ben Rothwell, whose average fight time is 8:12.

“The Notorious” Conor McGregor has prophesied fast finishes and he’s delivered on them. Ireland’s favorite son has five UFC fights with five wins, four KOs, and three were in the first round. It’s a record that reads like that of a heavyweight, not a featherweight. What is stretching his average out the most is his unanimous decision win over Max Holloway, which was his first time seeing a third round in his pro career and then hearing the judges’ scorecards too. Up next, McGregor will be battling the featherweight with the longest average fight time of 21 minutes, which happens to be the first and current UFC 145-pound champion, Jose Aldo, at UFC 189.

A tiger doesn’t change his stripes and “The Phenom” always likes to finish his fights quick. In 1997, Belfort made his Octagon debut at UFC 12 by winning his first two fights in two minutes combined. In 2013, Belfort won his most recent two fights in just shy of four minutes combined, so not much has changed. Out of his 13 wins inside the Octagon, he has recorded 12 first round finishes, with the outlier being a second-round TKO of Michael Bisping. Like McGregor, Belfort’s next Octagon appearance has gold on the line as he is set to take on UFC middleweight champ Chris Weidman, whose average fight time is just over eight minutes.

A couple weeks ago, it felt like we all got in a time machine and saw a Frank Mir we hadn’t had the pleasure of seeing in a long time. It had been 2011 since Mir had recorded a win, and in Porto Alegre, Brazil, the former UFC heavyweight champion got a big one. Already the winningest heavyweight in UFC history, Mir scored his 12th finish inside the Octagon, putting him one up on the next fighter on this list, Gabriel Gonzaga. Of his record amount of stoppages, Mir owns 10 of them in the first round, with eight of them by submission. Amazingly, the 1:40 finish of Antonio “Bigfoot” Silva was Mir’s eighth fastest finish in his 14-year UFC career.

As just mentioned, all 11 of Gabriel Gonzaga’s UFC wins are by stoppage. With seven KOs, “Napao” has that terrifying one-strike knockout power that he has shown time and time again, like in his two most recent UFC wins over Shawn Jordan and Dave Herman, which totaled less than two minutes of fight time. As a tried and true heavy, Gonzaga likes to trade power with power, which means he has been on the receiving end of four fast finishes. Trying to snap a two-fight losing skid, Gonzaga will revisit his most memorable UFC win as he tangles with Mirko Filipovic for the second time on April 11th.

Erick Silva is must-see TV. Alternating wins and losses since he first stepped inside the Octagon, Brazil’s “Indio” simply refuses to be in a boring fight, whether he’s winning it or losing it. All five of Silva’s UFC wins are first-round finishes ending by an explosive strike or submission. Silva’s pedal-to-the-metal mentality has worked against him in his four UFC losses, but those bouts have been just as exciting, as he owns six post-fight bonuses across nine performances. Silva shows no signs of slowing down, as he earned his most recent sub stoppage via arm triangle choke in just over a minute in December. Coming up next for Silva is a clash with another fan-friendly finisher in Ben Saunders at UFC Fight Night: Maia vs. LaFlare on March 21st.

Outside of his infamous decision win over Nick Diaz at UFC 57, former WEC middleweight champion Joe “Diesel” Riggs hasn’t seen a third round inside the Octagon in his eight other UFC bouts. Riggs swings for the knockout and he dives in on submission attempts. In doing so, Riggs does leave himself open for his opponent to do the same. He has quickly tapped Jason Von Flue and Joe Doerksen, and been quickly tapped by Matt Hughes and Mike Swick. The well-traveled veteran has pounded out Chris Lytle and been pounded out by Diego Sanchez. What it means is that all fight fans should be waiting with baited breath for Riggs versus Patrick Cote at UFC 186 in April because there will be fireworks.

Five fights into his young UFC career and Yancy Medeiros has barely even experienced a second round inside the Octagon. The Hawaiian scrapper was thrown to the wolves in his UFC debut, as he hadn’t fought in three years as he lost weight to drop from middleweight to lightweight to face Rustam Khabilov. It was a strange thumb injury that ended the bout early. Medeiros battled back, earning an impressive first-round stoppage of Yves Edwards before he took his next bout on short notice against a top ten lightweight in Jim Miller. The rocky beginnings have evened out in the second half of 2014 with Medeiros’ back-to-back Performance of the Night earning submission wins. Keep an eye out for Medeiros’ name on future cards because he has been consistently entertaining.

Quickly becoming a UFC fan favorite, Ukrainian karate stylist Nikita Krylov entered the Octagon for the first time with a stellar pro record that saw all his wins and losses occurring in the first round. Beside his out-of-character near three-round brawl with Soa Palelei in his UFC debut, “Al Capone” Krylov has delivered on the expectations of his previous record and earned three first-round finishes while being finished once in the first round. At only 23 years old, Krylov has shown that one-strike KO potential in his 25-second head kick finish of Walt Harris and, most recently, he used his long and lean frame to nab a standing guillotine choke on Stanislav Nedkov in 1:24. Make sure to catch the next Krylov clash because they’re always filled with highlights.

No surprise here. The first and only UFC women’s bantamweight champion, Ronda Rousey has stepped into the Octagon five times - all title defenses - and has only been outside of the first round once. Even more ludicrous, the Rowdy one’s last three opponents have barely lasted 90 seconds combined. Combined. With back-to-back sub 20-second stoppages, Rousey’s dominance is beyond hyperbole and it’s absolutely mind-blowing that the champ is only getting better. At UFC 184, Rowdy got back to her roots and pulled off a 14-second armbar on #1 contender Cat Zingano, which was Rousey’s ninth career armbar win and her sixth career armbar win in under a minute. Simply put, Rousey is unbelievable.