By The Numbers: Fight Night Foxwoods

Breaking down tonight’s UFC Fight Night: Jacare vs. Mousasi card By The Numbers... 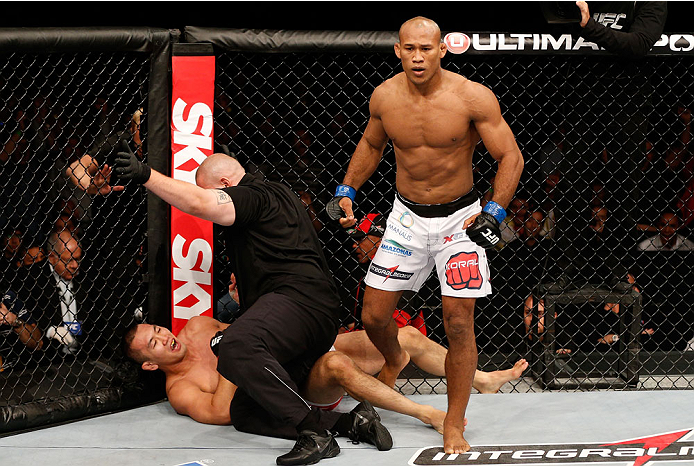 Tonight, the Octagon is in Mashantucket, Connecticut for the middleweight rematch between "Jacare" Souza and Gegard Mousasi. But before UFC Fight Night begins, let’s take a look at the card By The Numbers.

3255
Days between the last time the Octagon was in Connecticut with UFC 55 and this Friday’s UFC Fight Night: Jacare vs. Mousasi

2173
Days between the forthcoming main event match-up Ronaldo “Jacare” Souza vs. Gegard Mousasi and their first meeting nearly six years ago in Japan at DREAM 6 tangling for the then vacant DREAM middleweight title

2:15
Time it took for Mousasi to score a rare knockout via upkick on Jacare in that first bout

4
Current ranking for Souza as a UFC middleweight

7
Current ranking for Mousasi as a UFC middleweight

30
Finishes for Mousasi across his pro career

27
First round finishes by Mousasi including his most recent win over Mark Munoz at UFC Fight Night: Munoz vs. Mousasi in May

3:57
Time it took for Mousasi to secure a rear naked choke on Munoz earning him a Performance of the Night award

7:12
Average fight time for Mousasi over his last 16 bouts including a 25 minute chess match Fight of the Night against Lyoto Machida at UFC Fight Night: Machida vs. Mousasi in February

1.3
Significant strikes absorbed per minute by Mousasi in his past 16 pro bout, UFC average is 2.83

73.6
Striking defense percentage by Mousasi in his last 16 pro bouts

46
Submission accuracy percentage by Mousasi in his last 16 bouts, 7 finishes in 15 sub attempts

7
Current ranking for Alistair Overeem as a UFC heavyweight

+134
Strike differential for Overeem in his unanimous decision win against Frank Mir at UFC 169, 4th largest gap in UFC heavyweight history behind Cain Velasquez’s wins at UFC 155, UFC 166 and UFC 99<br />
92
Finishing percentage for Overeem across his 51 pro fight career

8
Of those submissions were guillotine chokes

73.6
Significant striking accuracy by Overeem in the UFC, UFC average 42%

78.6
Percentage of Overeem’s 173 sig. strikes landed inside the Octagon that were in the clinch or on the ground

87.5
Takedown defense percentage by Overeem across his opponent’s last 24 attempts

12
Fight unbeaten streak for Overeem, twice in his career

11
Submission wins for Rothwell in his pro career

7
Takedowns by Big Ben in the UFC, tied for 6th most among active UFC heavyweights

100
Percentage of Mitrione’s pro bouts contested inside the Octagon

7
Knockdowns by Mitrione in the UFC, tied for 4th most among active UFC heavyweights

66.8
Significant strike defense by Mitrione inside the Octagon, best among active UFC heavyweights

0
Takedowns attempted by Mitrione over 10 fights in the UFC

65
Significant strike accuracy by Lewis in his 2 UFC fights

139
Days since Lewis made his UFC debut in April at UFC on FOX: Werdum vs. Browne

3.2
Submission average per 15 minutes by Lauzon, 5th most in UFC lightweight history

69
Award winning percentage by Lauzon across his UFC fights

8:23
Average fight time for Chiesa in the UFC, 8th among active UFC lightweights