By The Numbers: Fight Night Austin

Breaking down Saturday’s UFC Fight Night: Edgar vs. Swanson card By The Numbers... 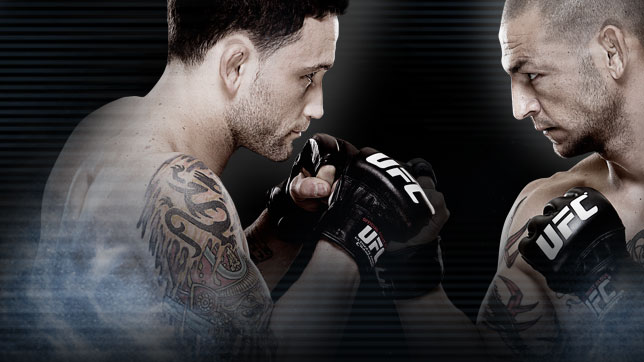 Saturday, the Octagon is in Austin, Texas for the featherweight clash between Frankie Edgar and Cub Swanson. But before UFC Fight Night begins, let’s take a look at the card By The Numbers.

9
Octagon events in Texas including this Saturday’s UFC Fight Night: Edgar vs. Swanson

1529
Days between this weekend’s event in Austin and the Octagon’s previous Austin appearance at UFC Fight Night: Marquardt vs. Palhares

4:45:25
Total fight time by Edgar inside the Octagon, 4th most in UFC history

767
Significant strikes landed by Edgar at 155 pounds, 2nd most in UFC lightweight history behind Sam Stout’s 965

42
Takedowns by Edgar at 155 pounds, 3rd most in UFC lightweight history

19
The Ultimate Fighter finale where Edgar finished his trilogy with B.J. Penn by scoring a third round TKO in July

2
Current ranking of Cub Swanson as a UFC featherweight

6
Wins in a row by Swanson inside the Octagon, 2nd longest active win streak in the UFC featherweight division behind current division champ Aldo

4
Of Swanson’s wins are by KO/TKO, tied for 2nd most in UFC/WEC featherweight competition behind Aldo’s 9

75.7
Percentage of those sig. strikes landed were at distance by Swanson, 5th largest proportion among active UFC/WEC featherweights (min. 350 att.)

12
Current ranking of Edson Barboza as a UFC lightweight

4
KO/TKO stoppages stemming from kicks by Barboza including his most recent first round finish of Evan Dunham in July, only fighter in UFC history to earn more than 3 finishes via kicks

8
Knockdowns scored by Barboza, tied for 2nd most in UFC lightweight history behind Melvin Guillard’s 13

7
Current ranking of “King” Bobby Green as a UFC lightweight

156
UFC event where King made his Octagon debut with a third round rear naked choke of Jacob Volkmann, which earned Green a Submission of the Night bonus

4.4
Significant strikes landed per minute by Green across his four UFC bouts

73
Significant striking defense by King inside the Octagon

66
Inches in height for both Camus and his opponent, Pickett, making this Camus’ first UFC bout where he is not at a multiple inch height disadvantage

10
Takedowns scored by Pickett against “Mighty Mouse” in their lone clash, tied for most successful takedowns in a UFC/WEC bantamweight bout

9
Of those subs are ezekial chokes

38
Career first round finishes by Oliynyk

125
Collegiate wrestling wins, most by a heavyweight in Oklahoma State University history

2
Current ranking of Joseph Benavidez as a UFC flyweight

4
Knockdowns scored by Benavidez, 3rd most in UFC flyweight history

4
Stoppage wins by Benavidez as a UFC flyweight including his most recent guillotine choke of Tim Elliott at UFC 172, which Elliott used the stomping of his feet to signal he was tapping out and Benavidez won a Performance of the Night bonus

13
Current ranking of Dustin Ortiz as a UFC flyweight

52
Significant striking accuracy by Ortiz across his four UFC bouts

10
Takedowns by Ortiz, 8th most in UFC flyweight history

4
Fight of the Night bonuses for Matt Wiman