By The Numbers: Fifth Round Finishes 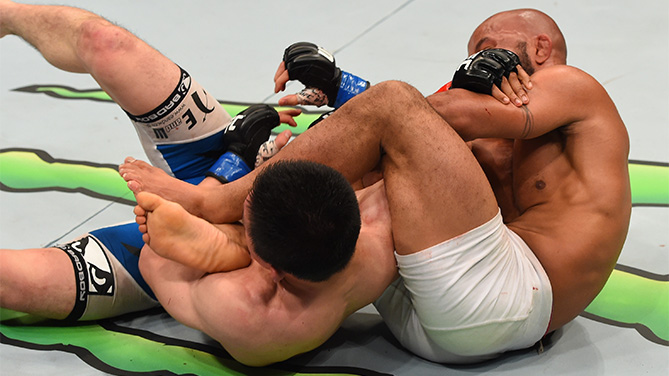 This past Saturday night, UFC flyweight champion Demetrious Johnson secured an armbar on challenger Kyoji Horiguchi and forced the tap with one second remaining in their five-round title fight at UFC 186.

In honor of Mighty Mouse hunting for finish until the final bell, here are the nine fifth round stoppages in UFC history.

TJ Dillashaw won the UFC bantamweight belt on Memorial Day weekend in 2014 and made his first title defense Labor Day weekend with nearly identical results. Originally, Dillashaw was scheduled for a rematch against Renan Barao, with these two top 135-pounders swapping roles as champion and challenger in a highly anticipated rematch. Sadly, Barao had issues with his weight cut and pulled out of the fight, which opened the door for Joe Soto to make his Octagon debut with gold on the line. While Barao and Soto are two very different opponents, Dillashaw went to work using his incredible stand-up attack, which is both high output and high variety. In the end, Dillashaw landed a head kick that drew the scrap to a close at 2:20 into the final stanza, which was a mere six seconds earlier than he finished Barao three months earlier.

Matt Serra’s first round clubbing of Georges St-Pierre at UFC 69 to win the UFC welterweight title will go down in Octagon history as the greatest upset of all-time, but Dillashaw’s outclassing and fifth-round finish of Barao at UFC 173 is a solid second on that list. Nothing against the talent and skills of current champ Dillashaw, but Barao was undefeated in nine years as an MMA pro and had more or less walked right through all of his WEC and UFC opponents up until Dillashaw. No one guessed Dillashaw would drop the then-UFC bantamweight champ in the first round and then proceed to outwork him for 20+ minutes until sealing the deal with a head kick and punches 2:26 into the fifth and final round. It was truly a belt-earning and star-making performance by Dillashaw.

What’s that saying about nothing being scarier than a motivated BJ Penn? In what would be his third and final successful defense of the UFC lightweight belt, “The Prodigy” delivered a trademark performance, showing off h’s punishing stand-up and his famed takedown defense. Meanwhile, this one-sided loss for Diego Sanchez is a testament to his iron will and unwillingness to surrender, no matter the cost. The numbers from those four and a half rounds speak for themselves, Penn landed 149 total strikes to Sanchez’s 8, and Penn stuffed all 27 of Sanchez’s takedown attempts. Entering the fifth stanza, Sanchez’s face had been lumped up something awful and, a couple minutes later, Penn delivered a head kick, which split Sanchez’s forehead causing a referee timeout followed by a doctor stoppage. Sanchez never quit, but Penn was simply on another level that day.

Honestly, if you haven’t seen this UFC heavyweight championship clash, no worries. It was a generation ago. Probably, two generations ago. Nevertheless, get on UFC FIGHT PASS and watch the first fifth-round finish in UFC history and one of the finest title fights the Octagon has ever known. Vying for the vacant UFC heavyweight strap, former champ Randy Couture tangled with rising star Ricco Rodriguez, who had scored four straight KO wins in his first four Octagon appearances. The bout itself was as dramatic as a fight fan could ever hope, with Couture controlling the action in the first, then battering Rodriguez in the second. It was the third round that saw the tide change as a bloodied Rodriguez began mounting ground-and-pound offense instead of receiving it. The fourth and fifth were all Rodriguez, with the coup de grace being a pair of elbows from on top, which split Couture open while on bottom and led to his submission at 3:04 in the final round. It was easily Rodriguez’s greatest achievement in his UFC and pro MMA career.

Their third meeting picked up right where the second one stopped, with current UFC heavyweight champion Cain Velasquez showing his dominance. In their first showdown at the inaugural UFC on FOX event, challenger Junior Dos Santos displayed on network television how powerful one strike with four-ounce gloves, especially thrown by himself, could be, as he felled then-champ Velasquez. And in their two clashes since, Dos Santos has been paying for that one knockout blow with a couple hundred smaller blows. From the opening minute to the final second when the referee intervened at 3:09 into the fifth, Velasquez smothered Dos Santos with strikes without tiring for an instant. The literal end was unexpected as a beaten and exhausted Dos Santos attempted a standing submission on Velasquez, who spun out of the choke, which resulted in Dos Santos torpedoing into the mat face first. Much like the Penn vs. Sanchez bout, it’s the sheer toughness of Dos Santos that kept this match going and it was the unrelenting pressure of Velasquez’s attack that kept this match going in the direction of his inevitable victory.

Without a doubt, the most famous fifth-round finish in UFC history. After a year-plus worth of hype from the greatest mouthpiece in the biz, Chael Sonnen did almost exactly what he said time and time again he would do once he was inside the Octagon with UFC middleweight champion Anderson Silva. In his record seventh title defense of the 185-pound belt, Silva was - for the first time ever in his UFC career – losing; like really losing. Round one through most of round five played out the same with the freight-train Sonnen spearing Silva with a takedown and then following up with ground-and-pound. With less than two minutes remaining in this historic title clash and the then-champ lying on his back like he had for most of the fight, Silva got wrist control on Sonnen, caught Sonnen in a triangle choke and as Sonnen tried to back out of the submission - Silva wrenched back on an armbar at 3:10 in the fifth. It was slick usage of Silva’s BJJ black belt that saved his UFC gold belt.

As mentioned, current UFC flyweight champion Demetrious Johnson owns the latest finish in UFC history, but for a little over a year Mighty Mouse held this same distinction with a different fifth-round finish. At UFC on FOX: Johnson vs. Moraga in July 2013, Johnson made his second successful defense of the title only he has ever held in an incredible performance that saw Mighty Mouse go 12 for 12 with takedown attempts - a UFC record in its own right. Sporting a bloody nose from a straight right he absorbed in the fourth round, Johnson came out just as determined in the final five minutes as he did in the first to take it to his challenger without a second thought to the score cards. Mighty Mouse would go on to hit another three takedowns, deliver elbows from side control as the champ is wont to do and hunt for a kimura. In that final couple minutes, Johnson would step over and transition from his kimura attempt to an armbar, which would wrap up both of Moraga’s arms and force the challenger to submit verbally at 3:43 in the fifth. Clearly, if there is still time on the clock for Johnson then there is still work to be done inside the Octagon.

In his quest for second shot at the featherweight title, former UFC lightweight champion Frankie Edgar became an old school ground-and-pound machine for his bout with fellow top contender Cub Swanson. The lone non-title matchup on this list, Edgar used his speed, timing and collegiate wrestling pedigree to score seven takedowns, and from there, “The Answer” went to work, landing more than 2/3 of his 93 significant strikes while in control on the ground. Another staggering statistic is that the BJJ black belt under Ricardo Almeida had 16 guard passes on the ground against Swanson, which illustrates that Edgar is just as active on the ground as he is on the feet. The gritty and game Swanson fought through the relentless top pressure, but it wasn’t enough that evening, as Edgar continued his onslaught until he took back mount with only seconds to spare and muscled a neck crank submission at 4:56 of the fifth.

And most recently, it’s UFC flyweight champion Demetrious “Mighty Mouse” Johnson’s - literal - last second stoppage of challenger Kyoji Horiguchi at UFC 186. Seemingly, this record can only be tied and not bested, and good luck with that. In his sixth successful title defense, Johnson had this bout won on the scorecards, having outstruck Horiguchi and having scored nine takedowns across the first twenty minutes. With energy to spare, Mighty Mouse would nail all five of his takedown attempts in the fifth round and, in the center of the Octagon, would commit to an armbar attempt, which would force Horiguchi to tap with a single second to spare at 4:59 in the fifth. It was a nice and well-scouted piece of work, as Johnson aimed to step over from his favored side control to mount, while Horiguchi went to give up his back as he tends to do. Mighty Mouse was ready to catch the far arm in the ensuing scramble to earn the stoppage, a Performance of the Night bonus and his spot once again at the top of this list in UFC history.