By The Numbers - Fastest Finishes in Title Fights

Last weekend at UFC 197, UFC flyweight champion Demetrious Johnson successfully defended his title for the eighth time, scoring a knockout of Henry Cejudo at 2:49 of the first round. That fast finish wasn’t even Johnson’s best with his strap on the line as “Mighty Mouse” delivered a Knockout of the Night of Joseph Benavidez in their December 2013 rematch at 2:08 into the first.

While those were two incredibly quick UFC belt battles, the Octagon has seen title fights end even faster. In honor of the UFC flyweight king’s swift work, here are the 10 fastest finishes in UFC championship history. 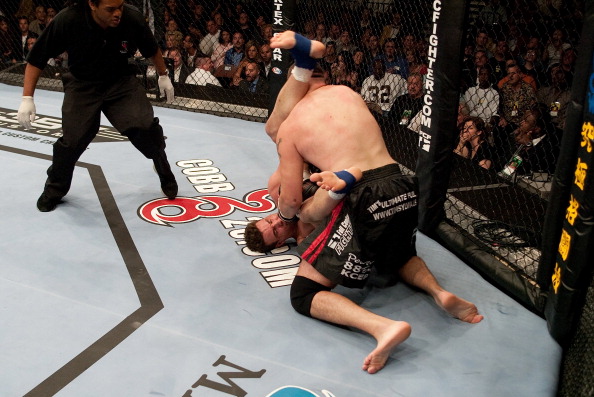 Fifty seconds doesn’t sound like a long fight, but it’s basically 49 seconds more than any fan remembers of this UFC heavyweight championship bout. They say a picture is worth a thousand words, and the moment when Tim Sylvia’s forearm suddenly buckles forward at the hands of Frank Mir is seared into the memory of millions of UFC fans. Forever. There were some strikes thrown and it was Sylvia who initiated the takedown, but Mir gamely positioned himself for an armbar attempt which would end the scrap without a tap. Referee Herb Dean was right in the mix, watching Sylvia try to power out of the submission. The arm broke, Dean called the stop, and Sylvia grumbled. His fifth sub stoppage inside the Octagon earned Mir the UFC belt and a reputation that you should tap when he’s got a hold of you. 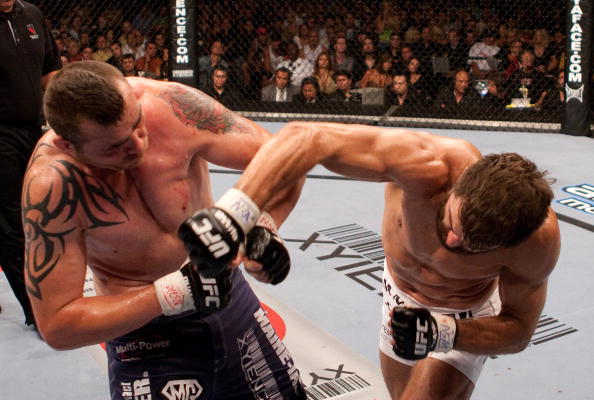 This list doesn’t do “The Maine-iac” justice, as he was one of the most successful UFC heavyweight champions, but Sylvia did get starched twice when the belt was up for grabs. After his forearm mended, Sylvia found himself inside the Octagon against fellow knockout artist Andrei Arlovski with what was then the interim UFC heavyweight title on the line. Like the previously mentioned bout, Sylvia was quickly finished with a submission attacking one of his lanky limbs, but this time it was his leg. The heavyweights exchanged a couple punches, Arlovski dropped Sylvia with a powerful right, and then things got even more interesting. “The Pit Bull” did look to land some follow-up punches with Sylvia on his back, but Arlovski went to his bag of Sambo tricks and dove on a leg lock. At 47 seconds into the matchup, Sylvia tapped to Arlovski’s achilles lock. 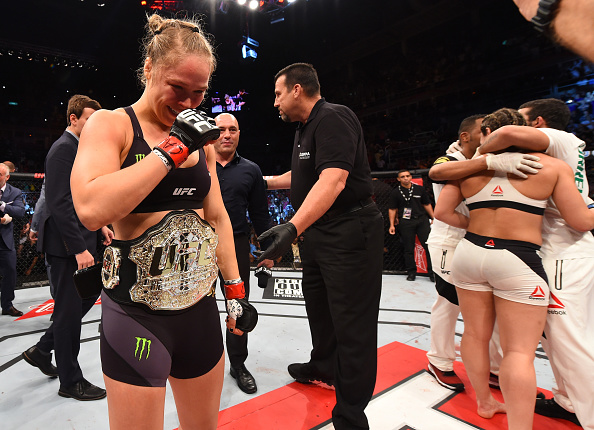 No one is more synonymous with finishing fights as quickly as they start than former UFC women’s bantamweight champion Ronda Rousey. The “Rowdy” one owns all 12 of her career wins by finish, with 11 occurring in the first round and eight of them happening in under a minute. The first of three UFC championship stoppages by Rousey on this list was easily the most emotionally charged and uncharacteristic. The former US Olympic bronze medalist in judo loves to fight with a chip on her shoulder, but the pre-fight hype between Rousey and the heavy-handed Bethe Correia was spectacularly heated. In her opponent’s home country of Brazil, Rousey was determined to beat Correia where the “Pitbull” was at her best - striking on the feet. Rowdy pressed forward with punches which trapped Correia against the fence and, from there, Rousey delivered a series of rights and lefts that KOed Correia. The 34-second stoppage ended Correia’s undefeated streak and kept Rousey atop the division. 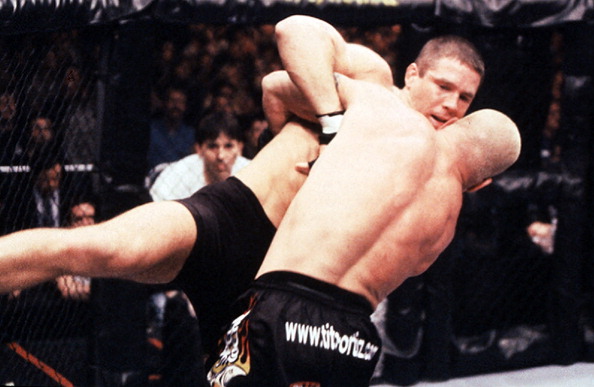 It took Tito Ortiz a full 25 minutes with Wanderlei Silva to win the UFC light heavyweight belt, but it took him about another six minutes inside the Octagon to defend his title three times. From 2000 to 2003, no one was better at 205 pounds than Ortiz, and he proved it with five consecutive title defenses with the first three occurring in the first round. The fastest of these finishes was a knockout via slam against fellow fan favorite Evan Tanner in Atlantic City. There were a couple of prods and pokes by Tanner and Ortiz before the abrupt ending. They both threw a kick and some punches, with Ortiz getting the better of the up-close exchange. Ortiz then got double underhooks on Tanner, lifted the smaller fighter, and “The Huntington Beach Bad Boy” drove the two of them into the canvas with himself right on top. As he reared back to land some ground-and-pound, referee John McCarthy dove in for the stoppage at just 30 seconds into the first round.

Eerily similar to the bout above, Frank Shamrock made his first successful title defense of what would become the UFC light heavyweight championship with a thunderous knockout slam victory that took just 22 seconds. In back-to-back bouts lasting only seconds each, Shamrock became the inaugural UFC champion of what was then called the middleweight division and successfully defended the belt. At the time, Igor Zinoviev was making his Octagon debut, owning an unbeaten pro record with submission skills and a dangerous right hand. In the pre-fight footage, the submission specialist Shamrock mentions that he had been working a lot on his striking. None of those tools for either fighter appeared to be used as Shamrock threw out a couple leg kicks before the two clinched. From there, Shamrock hulked up and lifted Zinoviev high into the air and then drove both of them to the mat, with Shamrock’s shoulder smashing into his opponent’s chin. There was no need for a follow-up anything as Zinoviev was asleep and Shamrock was too busy celebrating.

On paper, it was an incredible matchup to determine the first UFC champion of what would become known as the light heavyweight division. The bout was former US Olympic freestyle wrestling gold medalist and UFC 14 tournament winner Kevin Jackson versus a debuting submission specialist who had been tearing up the Japanese MMA world named Frank Shamrock. Like one would expect, the scrap started fast, with Jackson closing the distance and immediately hitting an easy double-leg takedown on Shamrock. In his previous two Octagon outings, Jackson made quick work of his opponents on the ground with punches and a rear naked choke. While this was his first UFC bout, Shamrock was already a true veteran of the sport and he didn’t bat an eye when the fight hit the floor. Shamrock shot for an armbar, turned his hips, and had Jackson tapping just 16 seconds into the championship clash. The younger brother of the famed Ken Shamrock had made about as impressive an entrance as anyone could ever dream. 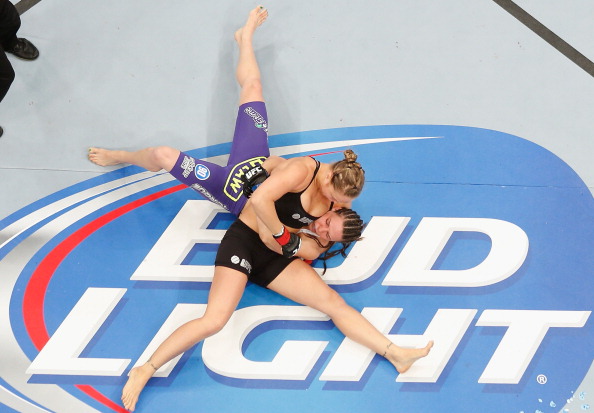 Like poetry in motion. Albeit, brutal poetry. The then-UFC women’s bantamweight champion unleashed a combination of strikes, a takedown and more strikes that was so fluid it would make even the greatest movie fight choreographer jealous. At the time, Canadian sensation Alexis Davis was riding a five-fight win streak, with the jiu-jitsu specialist’s striking looking better with each outing. As the belt battle began, Davis met Rousey in the center of the Octagon and two began exchanging punches. A right wobbled Davis then Rousey pulled her opponent in for a knee to the midsection, which immediately transitioned into a Harai Goshi (sweeping hip throw). As Rousey landed onto Davis and into side control, the Rowdy one teed off with short punches with Davis trapped in a headlock. All told, Rousey scored 14 significant strikes in 16 seconds to claim her fourth consecutive UFC women’s bantamweight title defense victory.

The ending was so sudden that the crowd and the commentators had no idea what had happened and didn’t even react. The two men that did understand the situation, thankfully, were referee John McCarthy and Andrei Arlovski. Only 15 seconds into the UFC heavyweight title fight, “The Pit Bull” struck Paul Buentello with an outright sleeper of a right hand. Arlovski ducked and threw his overhand right, which landed and left Buentello slumped across The Pit Bull’s back. Arlovski did pop “The Headhunter” a couple times in the first few seconds with a peppy right punch and Buentello did nothing to block the big cross counter as the two engaged that final time. As for the commentators, special guest Eddie Bravo hadn’t even had the chance to say a word and Joe Rogan audibly questioned, “What happened?” 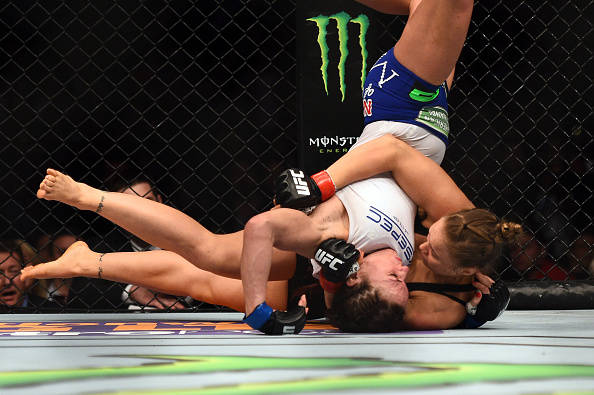 Finally, an armbar! The first UFC women’s bantamweight champion has two other quick wins on this list by knockout, but Rousey’s fastest career win was via the move that made her famous - the armbar. Rousey owns nine submission wins across her pro career and all of them are by armbar, with none quicker applied than the one Rowdy clamped on Cat Zingano in February 2015. The previously undefeated Zingano was coming off back-to-back third-round finishes inside the Octagon over Amanda Nunes and current UFC women’s bantamweight champ Miesha Tate. Surprisingly, a lot happened in this 14-second scrap. It started with Zingano throwing a flying knee that Rousey sidestepped, then they both grabbed for a clinch and both went to throw the other for a takedown. As they went to the ground, Rousey cartwheeled through the takedown and ended up with a high back mount on her opponent. As Zingano tried to escape out the back door, Rousey inverted Zingano’s prone right arm and forced the tap. 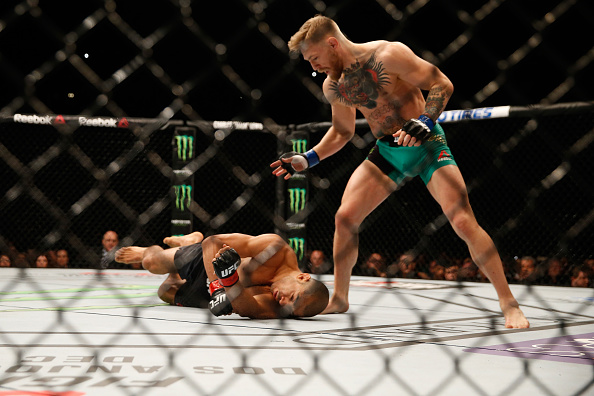 After nearly a year of build-up, with hours upon hours of interviews and the most tumultuous world tour ever, the actual altercation between then-UFC featherweight champion Jose Aldo and then-challenger Conor McGregor lasted 13 seconds. That’s about as long as it would take you to read the previous sentence out loud. Maybe it was all the emotion in the lead-up that messed with the head of Aldo, who had never lost under the Zuffa banner and hadn’t lost a pro bout in almost a decade. Maybe McGregor simply has the most dynamite left straight in the division. It was a possible five-round bout that many saw as a war to end all wars. In reality, it took “The Notorious” a couple of feints to get Aldo to reach for a punch of his own, which McGregor skipped backwards out of the way of as he returned fire with a crushing counter left that sent his revered opponent to the canvas. A couple follow-up hammerfists later and Ireland had its first UFC champion and the fastest finish in UFC title fight history.