By The Numbers: Champ vs. Champ 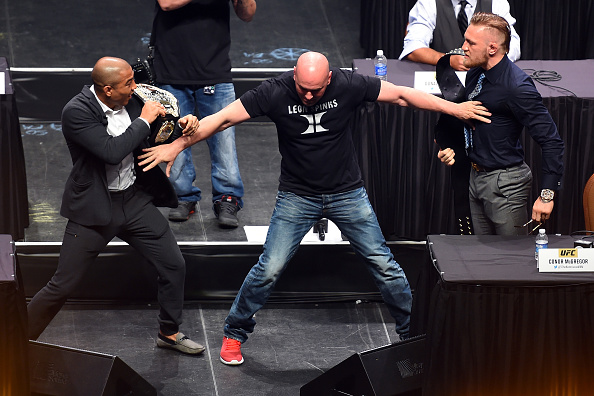 On Saturday, December 12, at UFC 194 in lovely Las Vegas, an undisputed UFC featherweight champion will emerge as interim champ Conor McGregor collides with current champ Jose Aldo. Historically, this will be the seventh time two fighters with a UFC belt around their waist in the same weight class will meet to settle who can continue wearing their gold and lay claim to being the division’s true top dog.

Here’s a look at the UFC’s current champion vs. interim champion clashes.

THE SETUP: Whether it was injuries, a contract dispute and/or filming the Jet Li and DMX classic “Cradle 2 the Grave,” then UFC light heavyweight champion Tito Ortiz disappeared from the Octagon’s radar for nearly all of 2003. In the meantime, former UFC heavyweight champion Randy Couture had reinvented himself at the lower weight with a career defining third-round TKO of Chuck Liddell at UFC 43 that June to nab the interim title at 205 pounds. The culmination of these two very different trajectories came to a one-sided conclusion three months later at UFC 44.

THE RESULT: “The Natural” was an unstoppable freight train of takedowns, scoring on eight of 12 attempts and landing over 70 significant strikes - including a few spanks - across the five-round unanimous decision. Ortiz’s offense was stuck in neutral, which made the 10 months away from the Octagon appear to be a huge detriment. It’s a common theme in many of these unification bouts, the champ returning from a long layoff is met by a surging interim champ who is hitting their stride.

THE SETUP: One year prior to this title vs. title bout, the most unthinkable knockout tore the roof off the Toyota Center in Houston as Matt Serra scored a first-round KO of then-UFC welterweight champion Georges St-Pierre. To begin with, Serra is/was a grappler by trade, but  “The Terror” would go on to drub the man who would then go on to become the most dominant champion the division has ever known, which is really saying something because UFC Hall of Famer Matt Hughes was the champion of that same welterweight division for a long time. Originally, Serra was supposed to defend his title against Hughes after their rivalry as coaches on The Ultimate Fighter 6, but Serra would have to withdraw due to a back injury. An interim title was created and St-Pierre would tangle with Hughes for the third time to decide that belt’s owner. At UFC 79, “Rush” would beat Hughes on the feet in the first round then submit Hughes on the ground in the second round to become the interim UFC welterweight champion.

THE RESULT: In front of the largest crowd in UFC history up until that time, St-Pierre would get his revenge on Serra with a one-sided TKO of his own. The 21,000+ Canadians in attendance were worked into a frenzy before a punch had even been thrown, as St-Pierre and Serra had quite the war of words in the lead-up to the rematch. The Terror did not and almost could not land any of the loopy power punches that were so effective the first time around as St-Pierre quickly grounded and pounded Serra in both rounds. If Serra’s back was at all still questionable after a year on the shelf, St-Pierre’s knees to the body did not help for sure.

THE SETUP: The year 2008 belonged to the letter B - Barack Obama, Beijing Olympics and Brock Lesnar. The latter made his Octagon debut and won the UFC heavyweight belt in the span of nine months. Because of contract disputes between the UFC and the previous champ Couture, an interim belt had been made, won by Antonio Rodrigo Nogueira and won again by Frank Mir. It was a mess that worked out perfectly as Lesnar and Mir had been champing at the bit for a rematch of their high-drama UFC 81 meeting, where Mir secured a first-round kneebar on Lesnar. While Lesnar quickly took control, the referee did halt the fight momentarily for supposed illegal strikes by Lesnar, and upon the restart, Mir swiftly submitted Lesnar.

THE RESULT: Lesnar got payback. Unlike the first go-round, Lesnar got Mir to the ground and bloodied him en route to a second-round TKO without much interference. An obvious difference between this clash and the previous two mentioned above is that the interim champ did not come out on top. In this matchup, there wasn’t a disadvantageous long layoff for the champ, as both Mir and Lesnar fought a month apart in their previous outings. Actually, Mir was the one getting over a knee injury that pushed this bout from UFC 98 to the more illustrious UFC 100.

THE SETUP: Brock Lesnar taught the MMA world many things, especially the word “diverticulitis”. The then-undisputed UFC heavyweight champion suffered a very well publicized and nearly fatal bout with the digestive tract infection. The rollercoaster ride of Lesnar’s health would not only push back a battle for the belt against then #1 contender Shane Carwin from UFC 106 to 108 then to 116, but it would wind-up creating an interim belt at UFC 111. While Lesnar tried to heal and get ready for an eventual return, Carwin tangled with Lesnar’s nemesis Mir in New Jersey for the interim UFC heavyweight belt. It didn’t take long for the then-undefeated Carwin to stop Mir with his fourth straight KO inside the Octagon.

THE RESULT: Arguably, the wildest of rumbles on this list. For all intents and purposes, the interim champ who was on a roll and not coming off an injury should have won this unification bout. And it really appeared like Carwin was going to. The first five minutes went about as bad as they possibly could have gone for Lesnar without the fight getting stopped. The interim champ Carwin knocked Lesnar down and proceeded to hit him with everything he had on the ground, which was exactly what he wanted to do. But the referee never stopped it and, after a few minutes, Lesnar somehow got back to his feet. Getting hit with 40 significant strikes didn’t wipe the smile off of Lesnar’s face as he scored a quick takedown and submitted a visibly gassed Carwin via arm-triangle choke in the second stanza. This bout almost played out like the others above, but Lesnar was just a bit too resilient and Carwin was just a bit too aggressive with not enough gas in the tank.

THE SETUP: Ever since the unification, “UFC welterweight champion Georges St-Pierre” was a phrase we all knew extremely well. Six successful title defenses later, Rush was on top of the world coming off a unanimous decision win over Jake Shields at the then-biggest event in company history at UFC 129. Later that year in 2011, St-Pierre was set for a big showdown with Strikeforce’s final welterweight champion Nick Diaz, but St-Pierre famously tore his ACL in training. With Rush in recovery, Diaz was matched against the WEC’s final welterweight champ, Carlos Condit, who was also on a four-fight win streak inside the Octagon. While the outcome was controversial, Condit became the interim UFC welterweight champion with a unanimous decision win over Diaz at UFC 143. With no animosity to speak of in the lead-up, Condit waited for St-Pierre to return for a champion vs. champion clash nine months later.

THE RESULT: Once again, Georges St-Pierre was crowned the undisputed UFC welterweight champion, but there was quite the hiccup in that being accomplished. Four of the five rounds showed a tactical Rush moving in and out at distance, scoring takedowns and landing most of his strikes on the ground. All of that clinical work by St-Pierre was almost undone by a perfectly timed head kick from Condit. A classic combo from “The Natural Born Killer” left St-Pierre dropped for only the second time in his career and in survival mode on the ground with Condit raining down blows from above. In post fight interviews, Condit has admitted the blitz was too frantic for its own good and should have been more calculated. In the end, St-Pierre endured and regrouped for the championship rounds. One could say it was similar to Carwin/Lesnar with the undisputed title so tightly in one’s grasp that it slipped through their fingers. Also, it was a Herculean effort by both St-Pierre and Lesnar to shake the cobwebs from those knockdowns.

THE SETUP: Having won, lost and won again the UFC heavyweight title, Cain Velasquez had truly made the belt his own with two successful title defenses. Besides the one-punch KO that cost him the belt the first time, no one inside the Octagon had been able to stop or even slow down the steamroller that was Velasquez. Outside of the Octagon was a different story, as Velasquez was hindered time and time again by injuries. One such setback came in the lead-up to Velasquez’s title defense against Fabricio Werdum, which was scheduled to be at the company’s first show in Mexico at UFC 180. Also, the pair were made rival coaches for the first season of The Ultimate Fighter: Latin America. As Velasquez withdrew from the meeting, knockout artist Mark Hunt was set to take on Werdum with an interim title up for grabs. With a spectacular flying knee halfway through the second round, Werdum scored a TKO of Hunt to claim the belt and continue his remarkable five-fight win streak inside the Octagon. The unification was scheduled to take place, once again, in Mexico City.

THE RESULT: After 20 months on the shelf, Velasquez may have had the crowd on his side, but he was battling his most dynamic opponent to date at an infamous elevation. While it was Velasquez’s ancestors that came from Mexico, Werdum was the one who had trained, fought and won there. Velasquez came out ready to establish a fast pace like all his other fights and he did take the first round. In the second, Velasquez began to slow as Werdum outstruck Velasquez on the feet by a wide margin. A couple minutes into the third round, Velasquez appeared desperate with an ill-advised takedown, which Werdum gladly used to secure a guillotine choke. Ring rust, not properly accounting for the 7,000 feet of elevation and/or an opponent on a mission led to Velasquez’s defeat and Werdum’s undisputed UFC heavyweight title.

THE SETUP: The one and only UFC featherweight champion, Jose Aldo has successfully defended his belt seven times inside the Octagon. Prior to that, Aldo was the final WEC featherweight champion and he defended that belt twice. Generally speaking, everything was going about as it always does for Aldo heading into his eighth UFC featherweight title defense against Conor McGregor at UFC 189. There was some more drama, attention and media obligations as the “Notorious” one’s ability to win five straight, including four KOs inside the Octagon, is amazingly outmatched by his ability to talk about it and drum up more hype for his next outing. After an insane world tour and months of preparation, Aldo withdrew from the highly anticipated affair due to a rib injury. In his stead, Aldo’s previous top rival Chad Mendes tangled with McGregor on short notice for a newly minted interim title. It was McGregor’s stiffest challenge and most fiercely contested bout to date in the UFC, but it still ended the same, with Notorious’ fourth straight KO and Performance of the Night bonus.

THE RESULT: It will be nearly 14 months since Aldo last stepped inside the Octagon and McGregor is the epitome of a surging superstar. It’s fair to mention that Aldo did defeat Frankie Edgar by unanimous decision at UFC 156 after a near 13-month layoff, so he has experienced a situation vaguely similar to this one before. Will McGregor ride the wave into a crushing victory? Will Aldo rise to the occasion once more? Tune in next Saturday.