By The Numbers: The Biggest and The Best 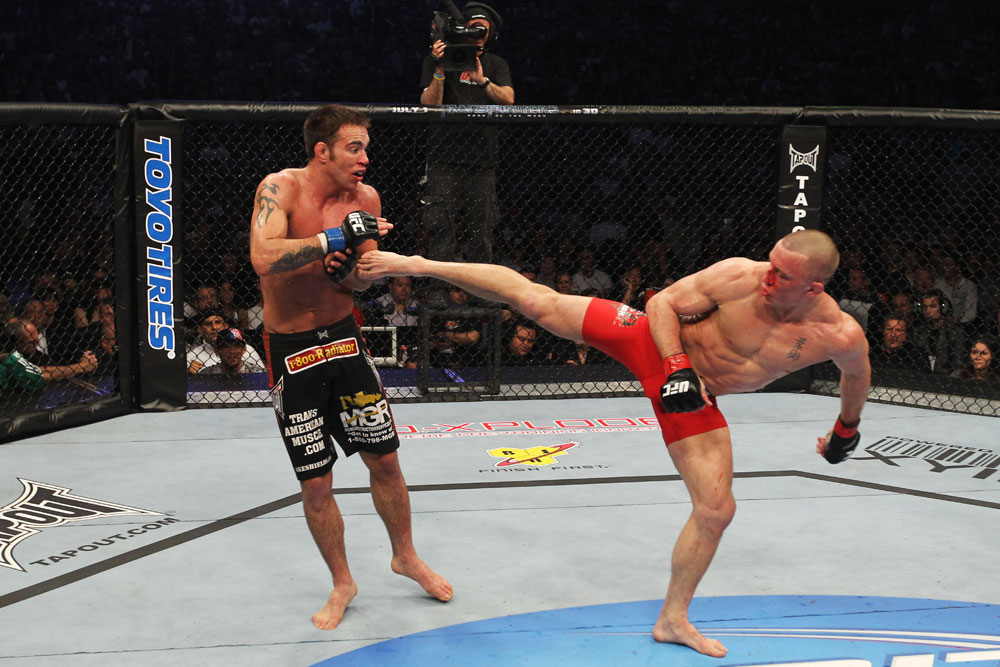 With UFC 193 looming in the not too distant future and the record for largest UFC attendance primed to be overtaken by a possible 70,000+ at Etihad Stadium in Melbourne, Australia, here’s a look back at the top 10 most-attended UFC events.

10. UFC 68 - 19,049
They say a fighter is only retired until their next fight and let’s be honest, most fighters’ return to action does not go well. But that was far from the case in Columbus on March 3rd, 2007, as Randy “The Natural” Couture became the oldest fighter to win a UFC belt. There was some interesting action earlier on the card like Martin Kampmann’s Submission of the Night, but UFC 68 will forever be remembered for its main event. With a slim talent pool amongst the big boys, two-time defending UFC heavyweight champion Tim Sylvia needed an opponent for him to exercise his enormous 6’8” build, 80” reach and heavy hands on. At 43 years old, the former UFC light heavyweight champ and former UFC heavyweight champ returned to the Octagon to deliver arguably the most memorable performance of his long and beloved career by earning a unanimous decision to win the belt. From the opening moments when The Natural dropped the giant Sylvia to the closing moments of ground-and-pound, it was a magical evening for Couture and the UFC Hall of Famer’s fanbase.

9. UFC 171 - 19,324
With the UFC welterweight title guaranteed to be in a new champion’s hands for the first time in seven years, Texans packed the American Airlines Center in Dallas to see “Ruthless” Robbie Lawler go to war with hometown favorite Johny “Bigg Rigg” Hendricks. Over the course of five phenomenal rounds, Lawler and Hendricks would land more significant strikes combined than in any previous UFC title fight and this clash would be heralded as 2014’s Fight of the Year. In the end, Hendricks would claim the crown and set up the excellent rematch nine months later. Also on the card, Ovince Saint Preux pulled off only the second usage of the Von Flue choke, and there were some great fights in the form of Rick Story vs. Kelvin Gastelum and Jessica Andrade vs. Raquel Pennington, as well as a one-sided beatdown by Dennis Bermudez.

8. UFC 144 - 21,000
The fighting spirit of the samurai was alive and well at the Saitama Super Arena for a crazy title fight and a great card filled with Japanese stars and former PRIDE favorites. The main event saw then-UFC lightweight champion Frankie Edgar aiming for his fourth title defense as he faced former WEC lightweight champion Benson Henderson. With his Gray Maynard trilogy behind him, Edgar tangled with a new challenger in Henderson, who would go on to win the scorecards and the belt, setting up a rematch six months later. Yet the most memorable performance on the card was probably turned in by middleweight Tim Boetsch, who scored a third-round knockout of Yushin Okami in a bout he had easily lost the first 10 minutes of. There were also three other big knockouts delivered by Takanori Gomi, Mark Hunt and star on the rise Anthony Pettis, who got the bonus for his head kick KO of Joe Lauzon.

7. UFC 180 - 21,000
Mexico loves the UFC and the UFC loves Mexico. UFC 180 was the first of two highly attended events in Mexico City’s Arena Ciudad de Mexico, both which featured Fabricio Werdum and the UFC heavyweight strap. While there was crazy action on the undercard (re: Jessica Eye vs. Leslie Smith’s ear), the main card was fast and furious with four straight first-round stoppages, including three submissions. Originally, then-UFC heavyweight champion Cain Velasquez was set to defend his belt against Werdum, who was not only the top contender, but a rival coach of the Mexican-American star on the inaugural Ultimate Fighter: Latin America series. Old news now, but Velasquez had to withdraw due to injury and was replaced on short notice by one-punch knockout artist Mark Hunt. After an entertaining first round, the BJJ black belt Werdum faked a takedown on Hunt and, as Hunt lowered to meet the tackle, Werdum exploded upward with a flying knee to score the beginning and, really, the end of a TKO to net himself the interim UFC heavyweight title.

6. UFC 188 - 21,036
In addition to the UFC loving Mexico, “Vai Cavalo” loves Mexico. Over a year in the making, Cain Velasquez was ready to rumble in the fabled land of his forefathers to unify the UFC heavyweight championship by taking on interim champ Fabricio Werdum. It would not be Velasquez’s night by a long shot. Instead, Werdum would make a triumphant return to Mexico City by battering Velasquez on the feet for two plus rounds before sinking in a guillotine choke to declare himself the UFC heavyweight champion, once and for all. With back-to-back headlining wins and finishes in Mexico City, Werdum may be the only UFC fighter to crack the code of fighting at the 7,000+ feet of elevation. In other memorable scraps, Yair Rodriguez and Charles Rosa tore the roof off the place, and Eddie Alvarez vs. Gilbert Melendez was a more than solid co-main event encounter. Plus, there were great performances by Kelvin Gastelum and Johnny Case and an outrageous pair of consecutive standing guillotine choke wins in under a minute each by Efrain Escudero and Patrick Williams.

5. UFC 83 - 21,390
The common theme to the top five of this list is that Georges St-Pierre was a big deal. A huge deal. And, Canadians love themselves some UFC. Four of the top five are in “The Great White North” and three of them are headlined by the country’s greatest fighting export - GSP. There were a lot of wild entrances and finishes on this card, like Cain Velasquez’s Octagon debut, Michael Bisping’s drop to middleweight and Demian Maia’s mounted triangle choke, to name a few. Also, there was a probable top 10 worst fight in UFC history with Kalib Starnes avoiding Nate Quarry at all costs. Nevertheless, the show was then-interim champ St-Pierre getting his hands on the only man to put GSP’s lights out – then-UFC welterweight champion Matt Serra. The rematch did not go so well for “The Terror,” as a laser-focused St-Pierre blitzed Serra with strikes and takedowns en route to a second-round TKO via knees to the body as Serra was turtled against the fence. The longtime champion St-Pierre was back on top of the mountain.

4. UFC 97 - 21,451
Sorry, Canada. Just 364 days earlier, Montreal and the Bell Centre set the UFC’s attendance record with UFC 83, and the Octagon was back with another star-studded card and another UFC attendance record. The only problem - which was a major one - is that the main event title fight was a dud of epic proportions. On paper, UFC middleweight champion Anderson Silva putting his uncanny knockout artistry against the submission wizardry of five-fight win streak owner Thales Leites sounds like a great matchup. In reality, Silva wanted no part of Leites on the ground while Leites wanted no part of Silva standing. More or less, it was 25 minutes of stalling and, by far, the worst headlining bout on this list. Of course, there were several great showings on the card like Mauricio “Shogun” Rua scoring a precise and methodical KO of Chuck Liddell, a back and forth Fight of the Night between Sam Stout and Matt Wiman, Canadian BJJ black belt Mark Bocek submitting Swedish BJJ black belt David Bielkheden and Krzystof Soszynski securing his trademark kimura on Brian Stann.

3. UFC 124 - 23,152
Yes, the Bell Centre hosted three of the UFC’s top five most attended shows - bully to you, Montreal. The final PPV of 2010 saw UFC welterweight champion Georges St-Pierre defending his belt in front of his hometown fans against dreaded heel Josh Koscheck, who had a three-fight win streak at the time and coached against GSP on the TUF 12. It was a very rough night for Koscheck, as he suffered a broken orbital bone from an early St-Pierre jab and continued to receive a drubbing of over 100 significant strikes absorbed to less than 20 landed. For the champ, St-Pierre was masterful in hitting and not getting hit for all five rounds while scoring on several takedowns of his opponent, a former NCAA Division I National Champion in wrestling. Other key moments of the event were Jim Miller’s lightning quick kneebar that derailed Charles Oliveira’s hype train and Mark Bocek tying up another savvy submission win against an equally dangerous grappler with his triangle choke of Dustin Hazelett.

2. UFC on FOX: Gustafsson vs. Johnson - 30,000
It was not the outcome the Swedes in attendance wanted at all, but, boy, did they ever pack the Tele2 Arena to its limits. The fourth UFC event held in Sweden was only the second stadium event held in UFC history (with UFC 193 being its third) and it was the first international UFC on FOX event, which means Scandinavia loves it some Octagon action. So much so that the main card actually started at 2 am in Stockholm with a raucous 30k in their seats. There were plenty of highlight reel finishes like Gegard Mousasi’s TKO of Dan Henderson and Makwan Amirkhani’s eight-second KO of Andy Ogle that made “Mr. Finland” a rockstar in his home country. But the diehards who were watching live at roughly 6 am were there to see Sweden’s own Alexander Gustafsson tangle with Anthony “Rumble” Johnson, and things did not go well for the local hero. “The Mauler” would get rocked early by Rumble’s rights, sucking the life out of the huge arena just in time for the sun to come up.

1. UFC 129 - 55,724
As mentioned, UFC welterweight champion Georges St-Pierre was a huge deal. A mega huge deal. In 2011, the only fighter on the UFC roster that could command a stadium show was GSP. To even think about making the leap to do a stadium show - which would more than double the size of the company’s previous best at UFC 124 - is a perfect illustration of what “Rush” meant as a game changing icon in Octagon history. Filling the Toronto Blue Jays’ Rogers Centre took a truly exciting card stacked with Canadian talent and two UFC title fights with, of course, GSP headlining. The outcome of the event and the fight were wins for St-Pierre, but the actual scrap inside the Octagon against Jake Shields was far from St-Pierre’s best. However, pretty much every other fight delivered with pummeling performances like Rory MacDonald over Nate Diaz and first-round finishes like Pablo Garza’s flying triangle choke of Yves Jabouin. The Fight of the Night was the true show stealer, as UFC featherweight champ Jose Aldo defended his belt against Canada’s Mark Hominick. For four rounds, Aldo scored at will on Hominick with whatever whenever, but “The Machine” never quit and nearly got a TKO finish of his own against a tired Aldo in the final stanza.