By The Numbers: The Best of Embedded 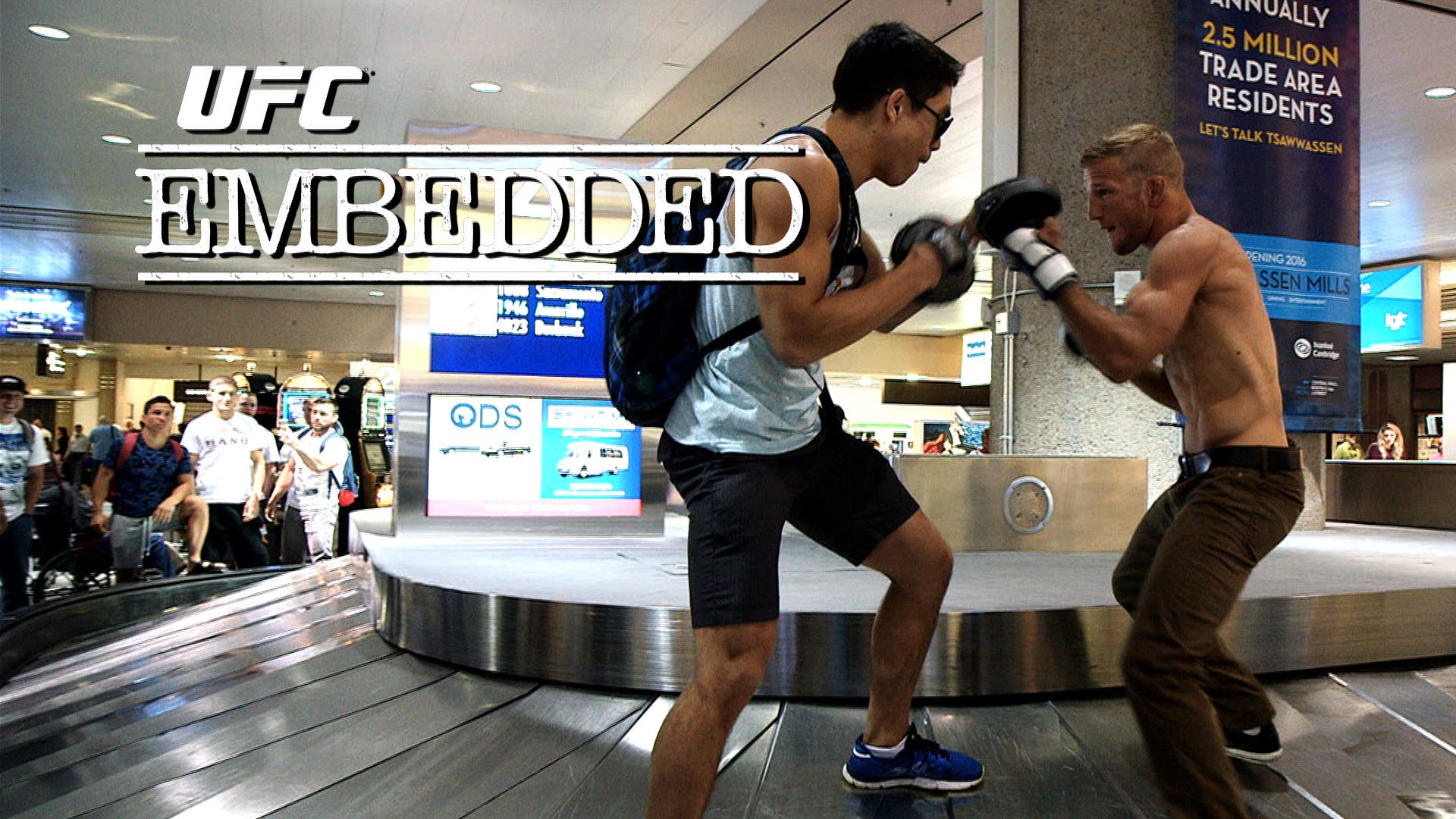 Last year, the UFC introduced a new behind-the-scenes video blog series called “Embedded”. Starting with UFC 173 in May, camera crews followed fighters at the top of the forthcoming pay-per-view card and UFC President Dana White to show insight into their fight week preparations, activities and, sometimes, shenanigans. Covering eight events across 46 episodes, here are 10 of the most memorable moments from Embedded thus far.

EA Sports UFC creative director Brian Hayes was put in an interesting situation on UFC 174’s episode two where three of the real-life versions of playable characters of the videogame he made played as “themselves”. UFC Hall of Famers Chuck Liddell and Forrest Griffin, as well as top-ranked UFC light heavyweight Daniel Cormier, took Hayes’ game for a test ride. The scene provides some laughs, from Liddell and Griffin’s opposing playing styles to Cormier’s disbelief that his playable self could get knocked out by a front kick to the face. But the funniest part is Griffin admitting he lied to the game makers about his age.

9. Fighters and their kids (Watch on UFC Fight Pass)

Obviously, an aspect of the Embedded series is to humanize these skilled supermen and superwomen by showing their softer side and nothing brings that to light like their kids. No matter how big or mean they seem inside the Octagon, all UFC fighters act like big mushes around their babies. There are a litany of scenes to choose, such as mister muscles Tyron Woodley trying to calm his crying son as he says goodbye at the airport or grizzled warrior Dan Henderson bringing cough syrup to his sick daughter in bed. Arguably, the cutest clip is of Daniel Cormier and his two little ones on episode two for UFC 182 saying their dad only has one more “bad guy” to beat and he will be the champion.

It sounds like a television show we would all like to watch. On UFC 180’s episode 1, Mark “Super Samoan” Hunt simply walked around Mexico’s capital like he owned the place while doing errands. There has always been a certain singularity and, with that, a natural confident air about Hunt throughout his fight career. The only non-European to be crowned the K-1 World Grand Prix champion was coming off an incredible knockout of Roy Nelson when he got the short notice call to fight Fabricio Werdum at UFC 180. With fighters almost always flanked by an entourage of coaches, teammates, and / or friends, Hunt is an intriguing spectacle flying solo in Mexico City to get his laundry cleaned and his hair bleached while casually taking phone calls with an interim UFC heavyweight title shot hanging in the ether around him.

With the UFC featherweight title on the line at UFC 179, the most provocative member of its division - “The Notorious” Conor McGregor - made sure to be in attendance. On episode 4, McGregor is shown walking the beaches of Rio and interacting with its people, including taking part in an impromptu capoeira roda or circle. Later in the episode, The Notorious is shown knee deep in his heated Q & A with the Brazilian fans, where they chanted for McGregor’s head while he told them how he’ll dethrone their king – if / when McGregor fights UFC featherweight champ Jose Aldo.

It was a lot less hectic of a scene than Stallone chasing chickens in “Rocky II”, but #1 ranked UFC featherweight Chad Mendes proved the same point - he’s fast. On episode 3 of UFC 179, Team Alpha Male is shown relaxing and catching some rays on the beach in Rio de Janeiro, which seems fair enough. Then it cuts to Mendes methodically sneaking his way toward a pack of pigeons on the beach, when suddenly, “Money” strikes. To the shouting disbelief of his teammates, Mendes caught a pigeon with his bare hands. Mendes promptly releases the bird and, even more promptly, accepts hand sanitizer from his girlfriend.

It’s great seeing UFC fighters, from curtain jerkers to main eventers, still getting excited watching the sport they know and love. On UFC 178’s episode 1, rising star Conor McGregor and UFC President Dana White are seen watching UFC Fight Night: Hunt vs. Nelson from “The Notorious” one’s hotel suite in Las Vegas. Before the headliners of Mark Hunt and Roy Nelson clash, White is seen pacing around and he says how he’s too excited for the fight to sit. And when Hunt lands that crushing knockout blow, McGregor et al explode. Moments later, McGregor’s head coach John Kavanagh mentions how the religious Hunt always thanks Jesus and Kavanagh delivers, arguably, the one-liner of the series, “Jesus loves knockouts.”

Without a doubt, the most heartwarming clip from last year’s Embedded run was of UFC middleweight champion Chris Weidman’s featured guest at UFC 175: Isaiah Bird. The six-year-old from Long Beach, Long Island, New York is an inspiration. Bird was born with no legs, but has found a passion for wrestling and has been tearing up the ranks in his age bracket. On episode 4 of UFC 175, Bird can be seen taking the current champ down and delivering some ground-and-pound for good measure. On episode 5, Bird shows no fear going for a takedown on UFC President Dana White as well.

Besides having fun winning six straight inside the Octagon, UFC lightweight Donald “Cowboy” Cerrone has a heck of a good time outside of it. In the lead-up to UFC 182, Cerrone is seen having a blast snowmobiling, taking a wild two-seater airplane ride and bombing around in a race car. In the lead-up to UFC 178, Cerrone is seen multiple times wakeboarding and even talking Cat Zingano into a day out on the boat. But the best “Cowboy” moment was completely unintentional and was on the very first episode. At the UFC main office, UFC President Dana White’s camera crew spotted Cerrone in the halls and “Cowboy” was there to drop off a present to UFC Senior Director of PR Dave Sholler. The gift was a shotgun and it was so Cerrone could take Sholler out duck hunting. There’s only one “Cowboy”.

Ronda Rousey is cut from a different cloth and she knows it. The undefeated UFC women’s bantamweight champion gets her training in wherever she pleases, including her hotel room. On episode 2 of UFC 175, Rousey’s cavalcade of distinguished coaches deconstruct the hotel room’s sitting area to provide the “Rowdy” one some room to shadow box, hit mitts and do some footwork technique drills. The scene is intercut with a voiceover provided by a post-workout Rousey who is keeping her sweat going in a zipped-up wintercoat. Rousey breaks down the behind-the-scenes struggles, from media obligations to getting sick to filming movies that have hampered her other camps. “This is the smoothest, most enjoyable camp I have ever had,” Rousey said and it showed on fight night as Rowdy scored a 16 second TKO of Alexis Davis, which was the fastest finish of 2014. “The routine of domination,” said Rousey - yes, indeed.

Honestly, there is no better goodwill ambassador than UFC site coordinator Burt Watson. Whether they’re a heavyweight or a flyweight, whether they’re from Brazil or Dagestan, every fighter’s face lights up like a kid seeing Santa Claus when Watson is around. He’s non-stop energy, he’s got a James Brown soundtrack for the weigh-in room and the man can give a hug. No one gives a better looking hug than Watson. He’s not afraid to get in there and commit to it, and there’s not a fighter on the roster that doesn’t want to give Watson a hug twice as hard back. Some of Watson’s best hugs on Embedded - and he gave a lot of them - were to current UFC bantamweight champion T.J. Dillashaw. On episode 4 for UFC 177, Watson gives Dillashaw some love and Watson is later seen giving one of his trademark impassioned speeches to the fighters that makes you want to yell “We rollin!!!!’”