By the numbers: 10 welcome returns to UFC 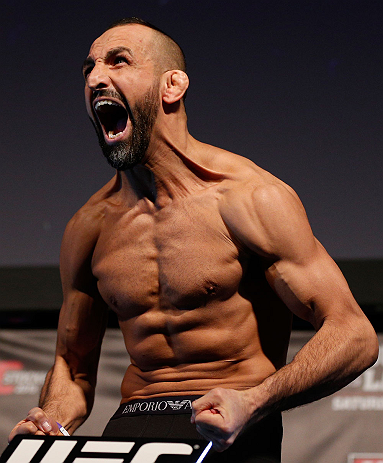 In the fourth quarter of this year and in the first of the next, a lot of memorable UFC names will be making their Octagon returns after substantial spells on the sidelines. Here is a list of some familiar faces with bouts scheduled who have been out far too long.

Reza Madadi - UFC Fight Night: Poirier vs. Duffy
Welcome back, “Mad Dog.” The Iranian-Swedish lightweight with a penchant for comeback submission wins is returning to Octagon action for the first time in two and a half years on October 24. Reza Madadi was last seen improving his pro record to 13-3 with a Submission of the Night D’Arce choke over current contender Michael Johnson back in April 2013 in his adopted home of Sweden. It wasn’t an injury, but a 14-month prison sentence that kept Madadi off everyone’s radar. Now back and ready to resume his career, Mad Dog has a tough test against TUF Smashes winner Norman Parke in Dublin.

More from UFC Fight Night Dublin: Bigger is better for Poirier | Duffy focused on Poirier, not McGregor |  Kavanagh opens up on rise of SBG and Irish MMA | Bubba Bush bringing Texas spirit to Dublin | Breese is the UK's new breed | Daly not missing the party

Erik Perez - UFC Fight Night: Brown vs. Gastelum
There’s no place like home and no better place to make one’s Octagon return. For a year and a half, Mexico’s favorite bantamweight Erik “Goyito” Perez has been battling injuries instead of opponents. A couple days shy of his 26th birthday, Monterrey’s own will aim to add to his 4-2 UFC record on November 21. Prior to the injuries, Perez scored three straight first-round finishes before alternating losses and a win in his next three UFC bouts. With the 135-pound division enjoying a lot of flux at the moment, Goyito could reinsert himself into the top 15 with a couple key wins.

Diego Sanchez - UFC Fight Night: Brown vs. Gastelum
Walking into his 22nd UFC clash, TUF 1 winner Diego Sanchez is both returning to the Octagon for the first time in about 16 months and debuting in a new division. At UFC Fight Night: Henderson vs. Khabilov, “The Dream” took a controversial split decision win over fellow TUF winner Ross Pearson. Since then, the 25-7 cardio-machine has been dealing with a slew of injuries including a collarbone that required surgery and kept Sanchez on the shelf this whole year. Now, he is dropping to featherweight for the first time in his pro career and is set to scrap with former 145-pound title challenger Ricardo Lamas. With seven Fight of the Night bonuses already to his name, expect Sanchez vs. Lamas to be on the short list for that award.

Yoshihiro Akiyama - UFC Fight Night: Henderson vs. Alves
The UFC and South Korea are bringing sexy back. “Sexyama” that is! Yes, the renowned judoka with a million dollar smile and a billion dollar tan is gracing the Octagon with his immaculate presence for the first time since his unanimous decision win over TUF 7 winner Amir Sadollah in September 2014. The victory in Japan over Sadollah snapped a rough four-fight losing skid for Sexyama inside the Octagon. The South Korean-Japanese superstar will be competing in Seoul for the first time in eight years and will be meeting undefeated Brazilian Alberto Mina. Also returning to the Octagon after a year plus away, “Soldier of God” owns all 11 of his pro wins via finish, including his UFC debut TKO of Shinsho Anzai in August 2014.

Mike Pierce - The Ultimate Fighter 22 Finale
It’s really great to see Mike Pierce coming back. The fight business can be an ugly one when people don’t play by the rules and Pierce was on the unfortunate wrong end of that. In October 2013, the former Portland State University wrestler was riding an impressive four-fight UFC win streak including two KOs. At UFC Fight Night: Maia vs. Shields, Pierce met the infamous Rousimar Palhares and “Toquinho” did – again - what he had been known to do, which is crank on a submission after a fighter had tapped. Pierce suffered a sprained MCL and a torn ankle ligament, which kept him out for over a year and he would later suffer a broken hand in practice. With his 7-3 UFC record, Pierce will make his Octagon return against the 11-1 Ryan LaFlare.

Khabib Nurmagomedov - The Ultimate Fighter 22 Finale
“The Eagle” has landed, soon enough. Owning a perfect 22-0 pro record, including six UFC wins, Khabib Nurmagomedov is re-emerging after a terrible knee injury. The Dagestani takedown terror stormed the UFC’s lightweight division and had booked a title eliminator against Donald Cerrone at UFC 178 in September 2014. The injury bug struck The Eagle and it’s been a year plus of rehab since. Much has changed in the division since his absence, with the most notable being that Nurmagomedov’s last win was over current UFC lightweight champ Rafael Dos Anjos, with Dos Anjos is set to defend the belt against Cerrone this coming December. As for The Eagle, Nurmagomedov will take on rising star and TUF 13 winner Tony Ferguson, who is also on a six-fight win streak.

Court McGee - UFC 194
Two days shy of two years gone, TUF 11 winner Court McGee is returning to Octagon action to tangle with TUF Brazil 3’s Marcio Alexandre Jr. An unquestionable fan favorite, McGee took some time off from the sport following his December 2013 decision loss to Ryan LaFlare. Originally, “The Crusher” went 3-2 as a middleweight inside the Octagon before going 2-1 as a welterweight. Besides his heartwarming and inspiring story of recovery, fight fans love McGee’s aggressive style and his sheer toughness, as he has never been finished in his pro career. It’s always a great scrap when McGee is involved.

Nate Diaz - UFC on FOX: Dos Anjos vs. Cerrone
It will be one year and six days since Nate Diaz stepped inside the Octagon as he aims to get back on the winning track against Michael Johnson at UFC on FOX: Dos Anjos vs. Cerrone. The fan favorite and TUF 5 winner was in rare form in all the worst ways possible in his last appearance against now UFC lightweight champ Rafael Dos Anjos. From missing weight to the one-sided loss, it was all quite surprising and, hopefully, an aberration from an otherwise remarkable UFC career. The Stockton star will jump right back into a tough matchup, as Diaz will collide with Johnson, who was most recently on a great four-fight win streak before being on the wrong end of a controversial split decision against Beneil Dariush.

Tamdan McCrory - UFC on FOX: Dos Anjos vs. Cerrone
“The Barn Cat” has roared like a lion in his MMA return, and now he’s back in the UFC. The lanky finisher from upstate New York alternated welterweight wins and losses inside the Octagon to a 3-3 record between 2007-2009. After his split decision loss to John Howard at UFC 101, McCrory made a stunning retirement at only 22 years old and stayed away from the sport for five years. Out of nowhere, The Barn Cat didn’t just make his comeback, but McCrory blasted through two opponents in less than 90 seconds combined and did so at middleweight. Needless to say, McCrory is geared up for his Octagon return as he is set for an exciting clash with the scintillating Josh Samman, who is 3-0 in the UFC, all by finish.

Dominick Cruz - UFC Fight Night: Dillashaw vs. Cruz
Finally. Please keep this man healthy until January 17. Easily, one of the most highly anticipated returns and bouts is “The Dominator,” Dominick Cruz, aiming to reclaim what was once his as he meets current UFC bantamweight champion TJ Dillashaw. The final WEC bantamweight champion and the first ever UFC bantamweight champion, Cruz famously battled back from three years worth of injuries to deliver a 61-second beatdown of Takeya Mizugaki at UFC 178. Sadly, Cruz got injured again and has been on the sidelines ever since. Only a few months away from now, hopefully, all the stars will align and The Dominator will have his opportunity to continue his nearly eight-year unbeaten streak and get his belt back in the process. Of course, if there was anyone up to the task of derailing Cruz, it would be current champ Dillashaw, who has been absolutely stellar since dethroning former champ Renan Barao.