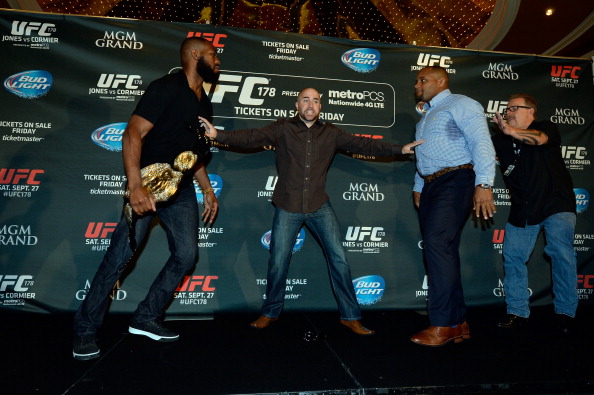 The big news out of Las Vegas Monday afternoon was the brawl that broke out at the MGM Grand between UFC light heavyweight champion Jon Jones and his challenger in the UFC 178 main event, Daniel Cormier, during the kickoff press conference for the event.

And though this unfortunate incident lit up social media outlets and message boards around the sports world, it wasn’t the kind of event that the leading brand in mixed martial arts wants to see.

“This is certainly not a proud moment for the UFC organization,” said Kirk Hendrick, the UFC’s Chief Legal Officer. “We expect more from our athletes, especially these two gentlemen, who are very well-trained and highly educated professionals.  Their actions were clearly a violation of the UFC’s code of conduct."

The Nevada State Athletic Commission has requested a video copy of the incident, and the UFC is cooperating fully with them in order to come to a quick resolution when it comes to possible penalties for both fighters. As for penalties from the UFC, Hendrick said, “We are going to reserve our right to penalize both fighters after the commission has made a decision. We expect more from our athletes and we are prepared to levy sanctions to reinforce the appropriate behavior."

Luckily, there were no serious injuries to the fighters or to anyone in attendance for the open to the public media day.