Mixed Martial Arts has grown beyond
the small screen. As
the UFC reaches new heights of popularity, more and more documentary
filmmakers have been turning their cameras toward MMA to record the stories of your
favorite fighters, and this weekend's headliner Matt Hamill had his
life adapted into a narrative film.

Here are a few non-fiction MMA
movies - current and classic - for your viewing pleasure. 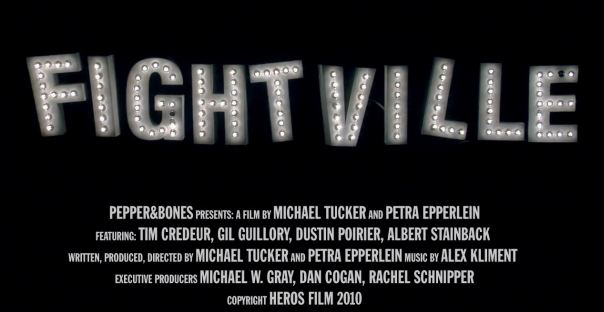 Fightville - Dustin Poirier and Tim Credeur
It’s
the new American dream: professional MMA fighter. An engaging and
gritty documentary about what it means to fight in the cage and what it
takes to succeed at it, the film follows now-UFC featherweight Dustin
“The Diamond” Poirier as he starts in local Louisiana shows. It also
showcases TUF's "Crazy Tim" in his real-life role as coach and mentor.

Recently
bought by Showtime, this doc picked up major buzz when it was accepted
earlier this year into the South by Southwest film festival and screened
at the Hot Docs festival in Toronto last month. Watch trailer 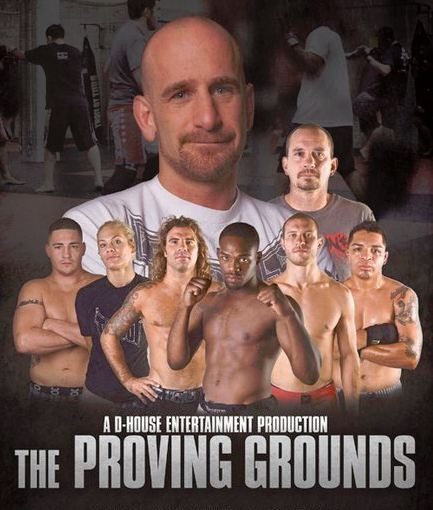 The Proving Grounds - Clay Guida, Jon Jones, Georges St-Pierre, Diego Sanchez, Donald Cerrone, etc.
Crazy Tim won't be the only movie star on the fight card at the TUF 13 Finale June 4 -- Clay Guida will walk the red carpet the night before for the Vegas premiere of The Proving Grounds. This documentary follows the athletes and "family" that make up Greg Jackson's top-ranked mixed martial arts school.  Watch trailer

Hamill -
Matt Hamill
Matt Hamill’s story of
triumphing in collegiate wrestling and then MMA despite being deaf has
inspired fans worldwide and, now, a film adaptation of his life. The
Ultimate Fighter season 3 alum’s amazing journey is chronicled in this
coming of age drama and Hamill is played masterfully by young actor
Russell Harvard.

Co-starring in the film, which hits theaters
this fall after racking up an armful of festival awards: Hamill's friend
and former opponent, Rich “Ace” Franklin. Watch trailer

Once I Was a Champion - Evan Tanner
This beautiful retrospective of the former UFC middleweight champion also offers an unflinching look at his life. Evan Tanner was a fan favorite with his gutsy in-ring performances. Outside the cage, Tanner was a deeply emotional person who remained a constant mystery to even his closest friends. This documentary presents an evolving image of the famed fighter through myriad interviews after his untimely death. Watch trailer

Like Water - Anderson Silva
This documentary follows the reigning UFC Middleweight Champion and P4P great in preparation for his highly-publicized title defense against Chael Sonnen at UFC 117. It’s a peek into “The Spider’s” training, friendships, family, and fighting philosophy.

It also features some rare insights into what went into the victory over Sonnen, such as his rib injury and his specific plan to win via submission. Watch trailer

Legacy - Renzo Gracie
From Renzo Gracie’s bare-knuckle fights in Brazil to his historic MMA matches in front of 40,000+ in Japan, an incomprehensible 10 years of filming went into this documentary, showing the drastic changes the world of MMA has gone through all while following easily one of its greatest personalities.

“Legacy” is truly a testament to a highly respected fighter, teacher and ambassador of MMA. The movie also features much of Gracie’s much loved candor, which will certainly make you a huge fan if you aren’t already (which you should be). Watch trailer

The Striking Truth - Georges St-Pierre and David Loiseau
The most famous name in MMA today is UFC Welterweight Champion Georges “Rush” St-Pierre. This behind-the-scenes documentary charts four years of both St-Pierre’s career, and that of former UFC fighter and teammate/friend David “The Crow” Loiseau.

It is a rare look into the personal and professional lives of two UFC fighters for an extended period of time. The two stories are told through an unfiltered lens, showing both their victories and their defeat in its rawest form. Watch trailer

Choke - Rickson Gracie
A truly must see for MMA diehards is the classic documentary of the ever-enigmatic and near mythical Rickson Gracie. “Choke” reveals the human side of the long considered greatest Gracie Jiu-Jitsu practitioner.

The movie focuses on Gracie’s training leading up to the 1995 Vale Tudo tournament in Tokyo, Japan as well as the three fights themselves. As engrossing as Rickson Gracie is, the quiet star of the film is the charismatic Royler Gracie. Watch the famous workout scene