It's Nothing New For Islam Makhachev

In speaking with Islam Makhachev ahead of his last several fights, the one thing that has stood out the most is the earnest confidence the surging contender now carries at all times.

Where some competitors are braggadocious or feel like they’re trying to convince themselves that what they’re saying is true as much as they are you, the 30-year-old grappler is completely at ease when it comes to speaking about his talents, his position in the lightweight division, and how things are going play out for him every time he steps into the Octagon.

“It’s because I have the best in the world (when it comes to) my sparring partners, my coaches, all the people that help me, and I’m training every day so hard,” said Makhachev, who takes on Bobby Green in this weekend’s main event, when asked where the confidence comes from.

No part of it is forced. No piece of it sounds rehearsed or untrue. He knows he is the best, and nothing will shake him from that position.

It’s a far cry from the first time I had the opportunity to speak with the standout from Dagestan seven-and-a-half years ago in Houston ahead of UFC 192.

At the time, Makhachev was less than five months removed from making his successful debut and 72 hours out from his sophomore appearance inside the Octagon. He was 24 years and 12-0 as a professional, but already garnering attention as a result of his relationship with lightweight contender Khabib Nurmagomedov, who would be in his corner that weekend along with his father, Abdulmanap, and American Kickboxing Academy leader Javier Mendez.

Standing in front of the assembled media and speaking through a translator, he was visibly nervous and palpably uncomfortable; a young fighter thrust into a brand-new situation, not yet as certain about his place in the ecosystem as he would be in the future.

A few days later, Adriano Martins dropped Makhachev with a beautiful counter right less than two minutes into their fight, with the local official rushing in to halt the contest as soon as Makhachev’s back hit the canvas.

Seven years later, it remains the only loss on his record.

With each subsequent victory, his confidence has grown, as has the public belief that everything his teammates and training partners said about him being the best young fighter in the division and then the heir to the throne Nurmagomedov abdicated is true.

He entered 2021 on a six-fight winning streak, standing as the dark horse in the lightweight division.

He extended that winning streak to nine with consecutive submission wins over Drew Dober, Thiago Moises, and Dan Hooker during an eight-month stretch last year, and aims to make it four wins in 11 months and 10 straight victories overall this weekend when he steps in opposite Green.

Before each of those 2021 contests, Makhachev said he wanted to show people he was on a different level than his contemporaries. So does he feel the same way ahead of his 2022 debut?

Green was not the man Makhachev was originally scheduled to face on Saturday night in Las Vegas, but when Beneil Dariush was forced out with an injury, the UFC tapped the 42-fight veteran to replace him.

Saturday’s main event will be Green’s second appearance of the month, as he earned a unanimous decision win over Nasrat Haqparast at UFC 271 in Houston. Prior to that, the 35-year-old turned in one of the best performances of his career, stopping Al Iaquinta in two-and-a-half minutes at UFC 268 in November.

Sporting a 5-2 record since the start of the 2020, Green is undeniably a dangerous test for Makhachev, and the exact type of skilled, savvy veteran that could turn a short-notice assignment like this into his own breakout opportunity by handing a streaking rising star an unexpected loss.

But Makhachev has no intention of allowing that to happen.

“This fight now is going to be my 10-fight winning streak, and I think this is key for the title fight,” Makhachev said. “I know I’m going to finish this guy, and soon, I am going to fight for the title.

“I’m going to take him down, make him tired, and finish him,” he said, offering his thoughts on how this weekend’s main event will play out. “It’s always same plan. I am better than everyone in my division for wrestling skills, grappling skills; this is nothing new for me.”

It would sound conceited and be cavalier to say out loud if there weren’t a mountain of evidence to support the claims, with his victory over Hooker in Abu Dhabi at the end of October serving as a real eye-opener. 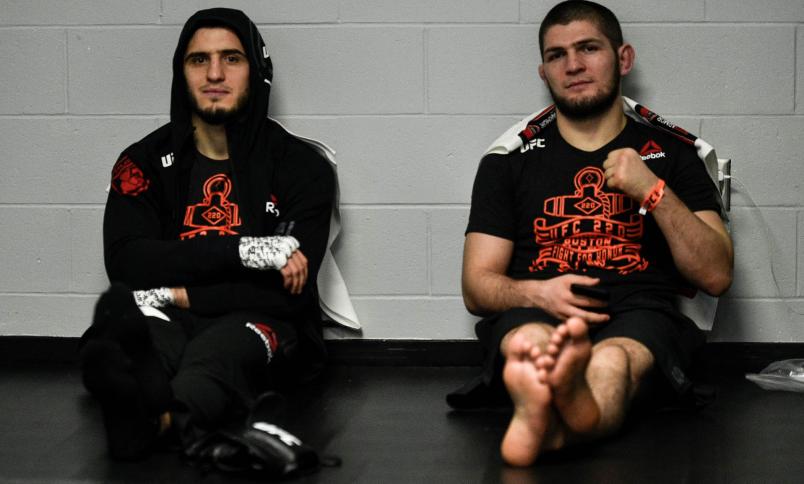 Islam Makhachev of Russia and Khabib Nurmagomedov of Russia wait backstage during the UFC 220 event at TD Garden on January 20, 2018 in Boston, Massachusetts. (Photo by Brandon Magnus/Zuffa LLC)

Paired off against the dangerous City Kickboxing representative, he put Hooker on the canvas in less than a minute, working right in front of his corner. He searched for openings, opportunities to advance, and softened the New Zealander up with short punches before attacking a kimura.

Clamping onto the double wristlock and stepping over Hooker’s head, Makhachev torqued back his arm, drawing out a tap.

As confident as he is, as good as he is, even Makhachev has to be a little surprised with how dominant he has been as of late, right?

“No, I’m not surprising myself, because I know,” he said, chuckling.

If you know, you know.