Not time for reflection, Shevchenko still has plenty of big moments to come 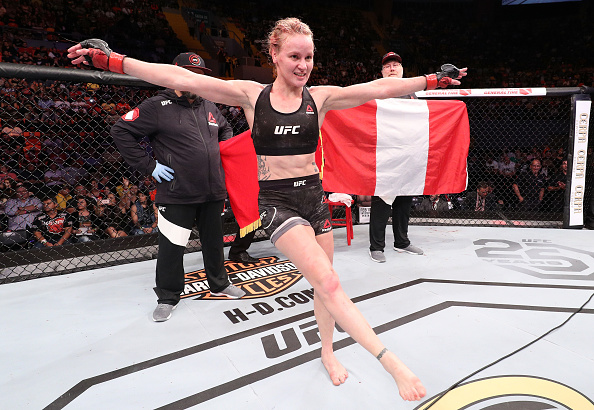 For 18 of her 30 years, fighting has been Valentina Shevchenko’s life, and there have been several notable moments. But as she gets close to another one – a Saturday challenge for Nicco Montano’s UFC flyweight title – she refuses to reflect on what nearly two decades of fighting has produced. Not yet.

“I think you’re ready for this answer when you are done with your career,” she said. “At the moment, I’m moving all the time and I do the things that I love to do. Martial arts is my life, and I’m still making my career and working on it. It’s a little bit early to say what is the most proud thing that I have done right now. I don’t want to think about it; I just want to enjoy the moment and enjoy my life.”

And that’s the thing. Despite throwing punches and kicks since she was a child, there is no sense of burnout with the Kyrgyzstan native, who has mixed a rigorous travel schedule with an equally daunting training regimen. She still embraces every experience, every training camp, and every fight. And this one is no different. But don’t equate enjoying the journey with just being happy to be here.

At bantamweight in the UFC, Shevchenko answered the call five times, winning three bouts, with the only losses being a pair of close decisions to current 135-pound champ Amanda Nunes. Needless to say, she was one of the top fighters in the division, but when it was announced that the UFC was bringing in the women’s flyweight division, she had a chance to become one of the best fighters in the sport. And she knew it.

“I’m very happy that the UFC opened this weight class because it was something I wanted,” Shevchenko said. “Before, all the flyweights didn’t have any options. They could only fight at bantamweight or lose weight and fight at strawweight. I knew if the UFC would open flyweight someday, I would be fighting there. Flyweight was my weight class.”

“At flyweight, I’m not the biggest one or the tallest one, but this is fighting with the same size opponent and I’m able to show all my arsenal, all my skill, all my techniques.”

Shevchenko could have said anything, but the MMA world needed a little visual proof. It got it – and then some - when she was matched up with Priscila Cachoeira in February.

The unbeaten Brazilian was a heavy underdog, but no one really expected to see Shevchenko tear through the UFC newcomer the way she did en route to a second-round submission win.

“I never consider an opponent to have lower skills or that I will have an easy fight,” she said. “Fighting at this level of competition, there are no easy opponents. You have to consider everyone as your biggest challenge. I just did what I had to do. All I was thinking of was going to the Octagon, being inside there, feeling the atmosphere and doing my best and showing the best of me.”

When the fight was over, many wanted to just hand the belt to Shevchenko. There was just one technicality that wasn’t considered. Montano had won that belt two months earlier, as she defeated Roxanne Modafferi to become the first women’s flyweight champion in UFC history. That was just fine with “Bullet,” who knew her time to challenge for the title would come soon enough.

“She won the belt, she showed that she deserved the belt, and she won all her fights on The Ultimate Fighter, so she will do everything possible to keep the belt,” Shevchenko said of Montano. “But it doesn’t matter for me because I’m here to win the fight. I’m not thinking much about my opponent. I’m focused on me and my preparation.”

That preparation has taken on Shevchenko on the road again, business as usual for the number one contender. But now she’s in Dallas and days away from her second UFC world title fight. This isn’t a daunting prospect for Shevchenko, who has been here before – not just in the UFC, but in her decorated Muay Thai career.

“In my Muay Thai career, I won 12 world championships and for ten years I was holding the champion’s belt,” she said. “Of course, my goal in the UFC is to do the same. And I hope that in this weight class, I will be able to do it.”

She will find out in a few days if that’s her destiny. But no predictions are coming from Ms. Shevchenko.

“My type of thinking is no words, just action.”