Read on for the results of the UFC 167 main card, which aired on Pay-Per-View... 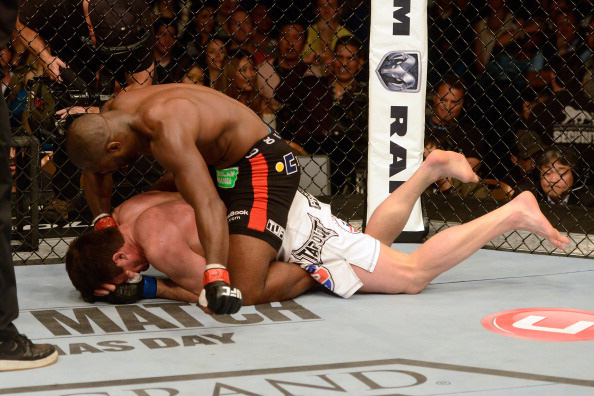 The main card of UFC 167 showcased both new talent and old-school skills, with dominant performances from both groups of fighters.

Rashad Evans vs. Chael Sonnen
Friends, fellow FOX Sports 1 broadcasters and top-ten light heavyweights Rashad Evans (24-3-1) and Chael Sonnen (29-14-1) put aside their lack of differences to clash in the UFC 167 co-main event. Fortunately for their friendship (and Evans’ record), that required under one round of conflict.

Sonnen charged immediately, and a lengthy tie-up on the fence ensued with both men working for submissions and takedowns. Eventually it was Evans who made space and got some shots in, then got the takedown mid-round. Evans postured above Sonnen and struggled to get in shots, but a big elbow from the top seemed to break Sonnen’s will. Sonnen turtled and when he turned back over, Evans was in full mount. As Evans rained down shots, Sonnen went belly-down again. With referee Herb Dean letting the seemingly-survivable fight continue, Sonnen kicked his legs behind him and tapped the mat in front of him, giving former champion the TKO win at 4:05.

Rashad's Take: “I feel great. It’s been a long time since I finished a fight in the first round. I know how tough Chael is and what he is capable of so I expected the fight could go the full rounds. The mindset in our camp at Blackzilians is very strong right now and it’s getting stronger every day. We’re all coming in with an intensity and trying to finish for here on out.”

Chael's Take: "Man, he hit me so hard in there. I couldn’t believe the amount of power he was able to generate. I think I could’ve stuck in there more minutes if I was in a more advantageous position. I was convinced I could beat him against the cage and in the boxing but he was able to get top position. There’s no excuse for losing in the same position multiple times so I definitely need to work on that. I think I can do better at light heavyweight but it’s probably time for me to return to middleweight.”

Rory MacDonald vs. Robbie Lawler
Technically precise, physically powerful and just 24 years old, third-ranked welterweight Rory MacDonald (15-2) has drawn criticism for his reluctance to engage. Against veteran slugger Robbie Lawler (ranked tenth going in), though, he had no choice, and Lawler brought the fight to MacDonald for three rounds, overwhelming him and taking the split decision win. 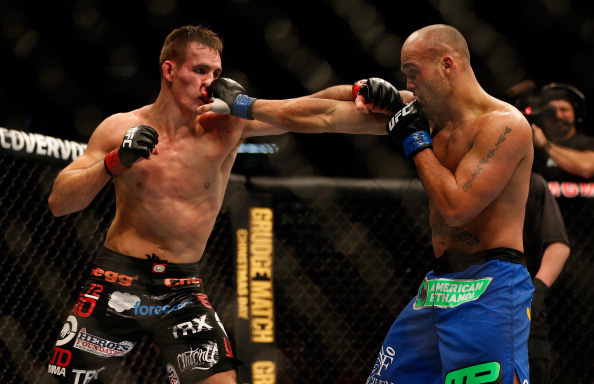 kicks. MacDonald stayed low and stared down his target the entire round, answering mainly with body kicks and jabs. MacDonald caught a late kick and threatened with the takedown, but Lawler got in a hard left and broke free.

MacDonald mixed up more leg kicks in the second as Lawler began to tire. MacDonald landed a good right hand and got a big takedown. He spent most of the time on the ground nullified in Lawler’s butterfly guard, but postured up in the final seconds to land big elbows.

Lawler came out guns ablaze in the third, and after a brief explosion, got taken down immediately, where MacDonald did nothing until boos caused a standup. The sequence played out again, but this time Lawler swept “Ares” and ground-and-pounded his way into MacDonald’s guard before letting him back up. An uppercut and a left from “Ruthless” bloodied MacDonald to the point that referee Mario Yamasaki stopped to check on him. A fast series of fists dropped MacDonald in slow motion, and Lawler followed him to the ground, punishing him from side control. MacDonald threw up an armbar, but a big punch from Lawler freed the UFC, PRIDE and Strikeforce veteran easily. Back on the feet, Lawler chased down the loose-limbed fighter, although MacDonald scored a takedown with 15 seconds left. The crowd was deafening as MacDonald threw elbows, the horn sounded and both men raised their arms in victory.

Lawler, who debuted in the UFC when his opponent was 12 years old, picked up his third win since returning to the UFC in February with scores of 29-28 twice and 28-29 and rising to 22-9 (1 NC) overall. The defeat is only’s MacDonald’s second (to 15 wins), the other coming late in the third round against Carlos Condit.

Josh Koscheck vs. Tyron Woodley
Power wrestlers Tyron “The Chosen One” Woodley and Josh Koscheck faced off in a welterweight war that ended quickly once Woodley was given room to strike. 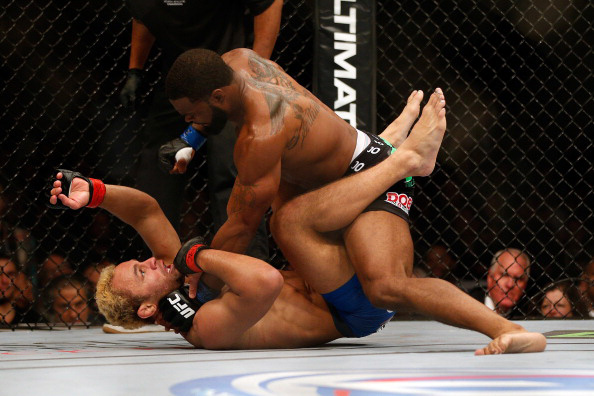 Woodley dropped Koscheck twice in the first round, and both times, Koscheck managed to tie things up – once against the fence, once in his tight guard – and force a restart. But Woodley got in some serious damage on the second knockdown, following him to the mat and raining down rights before Koscheck could reset. Back on the feet, Koscheck continued coming forward and both men threw, but it was Woodley who connected, his right hand knocking Koscheck back and down in slow motion. Woodley got in one more hard right before Koscheck actually hit the deck, then stood down, the fight clearly over.

The official time of the knockout was 4:38, as Strikeforce import Woodley picked up his twelfth career win (to 2 losses) – two of his three UFC appearances have been first-round knockouts. “When he threw that punch I was prepared to counter,” said Woodley. “We drilled that counter a thousand times and I was ready to connect on it. I’m trying to make my mark out there.” Koscheck’s record now stands at 19-8, with 23 of those fights taking place inside the Octagon.

Tim Elliott vs. Ali Bagautinov
Ali “Puncher” Bagautinov (12-2) didn’t make good on his pre-fight promise to knock out seventh-ranked Tim Elliott (10-4-1), but he lived up to his nickname and possibly cracked the flyweight top ten with the fifteen-minute unanimous decision win.

Elliott came forward with a low, loose stance, trying to catch or at least cut off the Dagestani. For his part, Baguatinov mostly backed up, looking for opportunities to explode with his uppercut. He 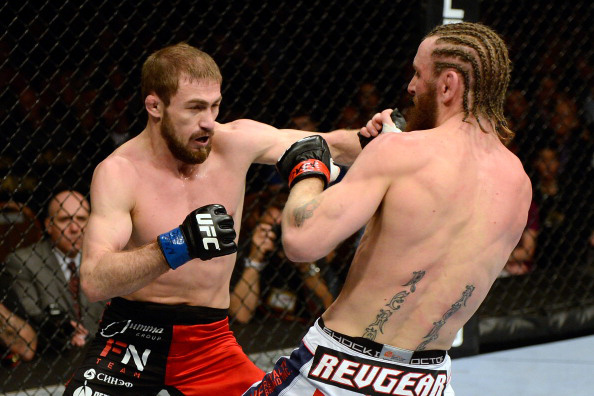 countered Elliott with a cracking knee, several right hands and a round-end headkick, and nearly got two takedowns, but Elliott showed his toughness and stayed in the game.

Bagautinov threw more combinations in the second and got a high-altitude takedown, landing in a tight guillotine that forced him to stand and slam his way free. His kicks, some to the face, landed frequently and took Elliott off balance while racking up points for the shorter fighter.

Somehow Elliott had the energy to continue pushing the pace in the third. His hands low, his stance sloppy, he left himself open to knees, high kicks, leaping lefts and a series of evenly-paced right hands from Bagautinov that Elliott was too exhausted or too rocked to avoid. Elliott mustered a final-second takedown followed by a crushing knee on the standup, but it was too little too late to net him a win.