For a while, Rashad Evans was seeing more doctors than opponents, a bad sign for any prizefighter. What made the ordeal that saw him get scrapped from bouts at UFC 205 and UFC 206 late last year even worse is that all those doctors said he was just fine after passing his tests with flying colors.

“At the time, I just couldn't understand it,” he said of the anomaly on an MRI that kept him from being licensed in New York and Toronto. “I did all the medical requirements and I passed all the tests that I needed to pass to get cleared, so when they said that I wasn't cleared, I just didn't understand it. I thought at some point they're going to say, 'Oh yeah, we made a mistake, you're fine.' It didn't really sink in until I'm actually watching the fights and I'm like, 'Wow, I'm really not fighting.' Then it kinda hit me.”

At 37, it was a crushing blow for a former world light heavyweight champion who was excited about making his move to the 185-pound weight class to start a new chapter in his career after back-to-back losses to Ryan Bader and Glover Teixeira. Those losses hurt his competitive pride, but at least he had the opportunity to fight back in each bout. This time, all he could do was wait as the Nevada State Athletic Commission decided his fate.

“It was nerve-racking to say the least,” Evans said. “At one point I talked to the UFC and it really wasn't looking good for me. I went to see specialists, I saw the guy that was part of that movie 'Concussion,' and he checked me out and cleared me and said I was fine. Then I went to see another doctor out in California and he said I was absolutely fine. And they figured out what was wrong - what the problem was and how it was misread. And once they said I was fine and in no danger and my health was great, I was relieved, first and foremost from a health perspective.”
RELATED CONTENT: Matchup with Dan Kelly | Evans appears on Episode 4 of Embedded

But Nevada held the key to his fighting future, and eventually, they opened the door for him.

“When they said I could return to competition, I was even happier. So when Nevada gave me the clearance, I was really happy because I worked so hard for this. I know my time's gonna come where I can't fight anymore, but I was hoping it wouldn't end like that.”

Fighters don’t want their fates decided in doctors’ offices or meeting rooms, and Evans is most certainly a fighter, so when his clean bill of health was met with a license to fight and an opponent to fight with, that ear-to-ear smile returned. And now it was time to get ready for Daniel Kelly and a UFC 209 fight in Vegas this Saturday. Only this time, Evans is approaching what may be the most pivotal bout he’s had in a long time with a new / old attitude. 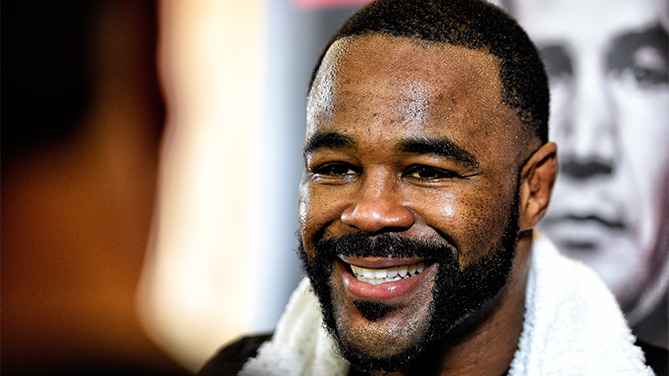 “Rashad Evans is still here, and the guy who started the whole fight game is here too,” he explains. “And that's the one I've been trying to get back for the longest time. That's the guy who would work eight to ten hours in the hospital and then come home and work out two to three hours by himself, running himself, training himself as hard as he can, saying all the positive affirmations, having all the delusional daydreams that eventually came true, and really just enjoying every, single step of the journey. Even if it doesn't amount to anything, it’s just the personal challenge of it all. I feel like I got out of that by putting so much energy into everything that had nothing to do with me. I'm not a selfish person, but at some point, when you want to be the best in the world, you almost gotta be.”

It’s a lesson every fighter has to learn, that in this sport, being selfish isn’t a bad thing, but a necessity. Evans, one of the good guys of the game, took a while to get on board with that line of thinking, but he knows he needs to have it if he wants to make a run at glory once more.

Yet such a run is still far off into the future. It’s one step at a time now, and the first one is against four-time Australian Olympic judo team member Kelly. Winner of three in a row, the 39-year-old Kelly has surprised many with his run of success in the Octagon, but while he’s not going to fill up highlight reels, he’s determined, he’s an athlete, and he knows how to find a way to win. That’s a dangerous combination and Evans knows it, so he’s not too concerned with how he gets the victory, just that he gets it.

“I'm not looking at it as if I have to do this or that,” he said. “At the end of the day, I'm looking to go out there and fight a tough guy and that's what he (Kelly) is. He's one of those guys that doesn't look good when you watch. Frankly, he's underwhelming to watch, but obviously he's doing something right and he has a resolve that's been getting some good results. So you can't knock him, because he has that Olympic experience and he knows how to win. So there's something to be said about that, and I think that one thing that can get you in trouble as a competitor is that you can't overlook anybody. So I can't really look at this fight and say that it has to be this way in order for it to be that Rashad Evans is this or Rashad Evans is that. Whatever I am, it's gonna speak for itself.”

And at this point, he’s just excited to be able to make those statements once again.

“I’m happy that I get the chance to compete,” Evans said. “I've been on a tough road these last few years and I really wanted to return to my form where I enjoy competing again. It's not always about the results; it's about the way you compete and how much you enjoy the process of competing.”