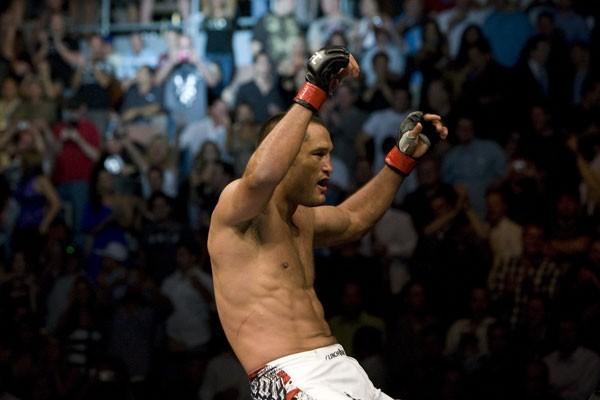 Though combat sports have always appeared to be a young man’s game, over the years a few notable athletes have made their mark past the age when most would assume they could still compete at the elite level. In boxing, George Foreman, Archie Moore, and Bernard Hopkins immediately come to mind in the sweet science’s Over 40 club, but mixed martial arts has had its share of 40-something wonders, and one of them, former Strikeforce and two division PRIDE champion Dan Henderson, will look to make history once again when he takes on Jon Jones for the UFC light heavyweight title on September 1st, just eight days after his 42nd birthday.

So in honor of Hendo’s quest for glory, here are the six of the best UFC performances by a fighter 40 or older.

6 – Vladimir Matyushneko (40) TKO1 Jason Brilz – UFC 129
A pro since 1997, Belarus native Vladimir Matyushenko had a career resurgence in his second go round with the UFC, which began in 2009 when he was at the ripe old age of 38. During that most recent stretch, “The Janitor” went 4-2 in the Octagon, with the only losses coming against current 205-pound boss Jon Jones and rising star Alexander Gustafsson. As for his “40-year old” win, look no further than April 30, 2011, when he needed just 20 seconds to knock out Jason Brilz. And he did it in front of over 55,000 people at UFC 129 in Toronto. Not too shabby.

5 – Cung Le (40) W3 Patrick Cote – UFC 148
For Cung Le, a lifetime of experiences as a martial artist wasn’t going to compare to getting a win in the UFC, and though he fell short in his first attempt, losing a Fight of the Night war against Wanderlei Silva last November, after the striking wizard turned 40 in May of this year, he got his wish and a belated birthday gift, gutting out a hard-fought three round unanimous decision win over Patrick Cote at UFC 148 in July. It was Le’s first time going the distance as a mixed martial artist, and it proved not only that he was a true UFC fighter, but that when it comes to some elite athletes, age ain’t nothin’ but a number.

4 – Ken Shamrock (40) KO1 Kimo Leopoldo – UFC 48
At UFC 40 in 2002, Ken Shamrock and Tito Ortiz engaged in a fight that was bigger than anything ever seen in the UFC. It would be a little over a year and a half before “The World’s Most Dangerous Man” would step into the Octagon again at UFC 48 in Las Vegas, and four months after his 40th birthday, UFC Hall of Famer Shamrock scored what ended up being the last win of his UFC career, as he knocked out old rival Kimo Leopoldo with a knee in just 86 seconds.

3 – Mark Coleman (44) W3 Stephen Bonnar – UFC 100
After his courageous effort at UFC 93 in January of 2009, as he went nearly three rounds with Mauricio “Shogun” Rua in their rematch before succumbing to exhaustion and the Brazilian’s strikes, UFC pioneer Mark “The Hammer” Coleman had earned at least one more fight in the Octagon that he helped build, and what better time was there to do it than at UFC 100 in July of 2009. For many, it was going to be an opportunity to cheer for Coleman one more time, but few expected him to beat Stephan Bonnar. But for one night only “The Godfather of Ground and Pound” returned, and for three rounds, the 44-year old Coleman showed Bonnar why he was inducted into the UFC Hall of Fame. The three round decision was clear-cut and unanimous – Mark Coleman was the winner.

2 – Dan Henderson (41) W5 Mauricio “Shogun” Rua – UFC 139
Though he’ll probably sail to the top of this list should he beat Jones at UFC 151 on September 1st, Dan Henderson’s win as a 41-year old over fellow PRIDE star “Shogun” Rua last November wasn’t too shabby either, especially when you consider that practically everyone who saw the five round battle in San Jose now refers to it as one of the greatest fights in MMA history. You would think that alone would push it to the top of the heap, but how can you argue with the greatest fighter ever to represent the 40 and over crowd being on top?

1 – Randy Couture (43) W5 Tim Sylvia – UFC 68
Born on June 22, 1963, Randy Couture amazingly fought 14 times in the UFC after hitting the big 4-0. And some of the men he fought were pretty damn good. How’s about Chuck Liddell, Tito Ortiz, Vitor Belfort, Antonio Rodrigo Nogueira, Lyoto Machida, Mark Coleman, and Brock Lesnar? And that’s just to name a few. But if you want to know the best performance by the over 40 Couture, look no further than March 3, 2007, when the 43-year old legend returned from a year long retirement to win a shutout five round decision over 6-8, 260 pound Sylvia. It was one of the most stirring and memorable moments in UFC history, and one anyone who was there in Ohio that night to see it live will never forget. And when it was over, Couture etched his name further in MMA lore when he told Joe Rogan during his post-fight interview, “Not bad for an old man.” Oh no, not bad at all.