As the youngest fighter currently on the UFC roster, 19-year-old Sage Northcutt was the recipient of plenty of hype leading into his Octagon debut Saturday. But the Texan was seemingly unbothered by it as he needed less than 1 minute to stop Francisco Trevino in their UFC 192 prelim bout at the Toyota Center in Houston.

The victory was the unbeaten Northcutt’s sixth as a pro. And he made it look easy.

After Northcutt attempted to find his range with a couple kicks, he and Trevino got tangled up and went to the mat. Seeing his opponent down was enough to send the Katy, Texas product into a finishing frenzy, and after stunning his foe with a flurry against the fence, Northcutt slammed Trevino down and fired off a series of unanswered blows. Referee Herb Dean intervened at the :57 mark as Trevino protested the stoppage, but the call stood.

Northcutt, who was the third youngest fighter to debut in the UFC, moves to 6-0. McAllen’s Trevino, who came in overweight at 160 pounds for the bout, falls to 12-2. 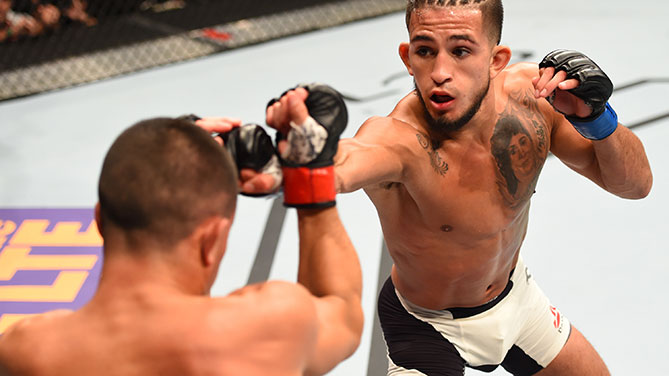 Flyweight prospect Sergio Pettis withstood a late charge from former world title challenger Chris Cariaso but walked away with a hard-fought unanimous decision win, logging the biggest victory of his career in the process.

Pettis (13-2) got the bout to the mat in the opening minute, catching a Cariaso kick to do so. Cariaso (17-8) worked his way up to his feet without taking any damage, and even as Pettis put the pressure on, Cariaso landed several hard kicks to the midsection. Pettis scored a knockdown with 1 minute left though, a right hand doing the job, and the Milwaukee native pounced, flurrying with both hands as he tried to end the bout. Cariaso defended well though and made it to the horn.

Mixing things up well between his stand-up and ground games, Pettis logged another round in the second, not allowing Cariaso to get off more than one shot off at a time.

In the third, the 22-year-old Pettis looked for the guillotine choke twice but wasn’t able to secure it, allowing Cariaso to get in the top position. Even there, Pettis stayed busy, landing a hard upkick while he still sought submissions from his back. Cariaso didn’t stop pressing though, as he tried to sink in a heel hook in the final seconds but just ran out of time. 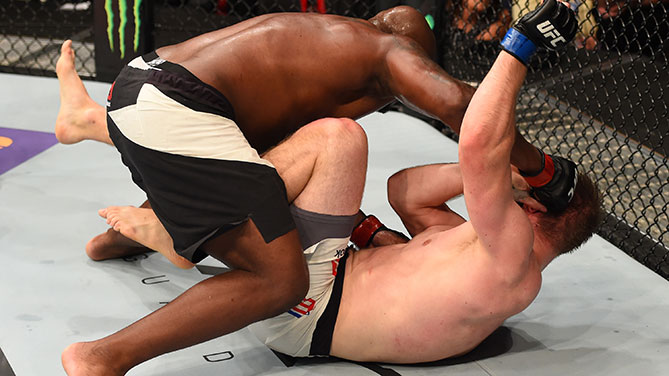 Heavyweight banger Derrick Lewis thrilled his hometown fans in the opener, getting stronger as his fight with Viktor Pesta progressed before ending it with a TKO in the third round.

The fighters traded takedowns to begin the bout, Pesta getting more out of his trip to the mat, as he landed in side control where he scored with knees to the body and punches to the head. With under 3 minutes left, Lewis got to his feet and briefly threw his foe down only to see Pesta rise and deliver two more takedowns before the end of the frame.

Pesta dominated much of the second round behind the same strategy that worked for him in the first. But in the final minute, a sloppy scramble ended up with Lewis on top and Pesta forced to defend a barrage of ground strikes that left him dazed and tired at the horn.

A Pesta takedown attempt came up short in the opening minute of the final round, and again it was time for Lewis to unleash his strikes. This time Pesta was unable to get out of trouble, with referee Kerry Hatley halting the bout at the 1:15 mark after a series of unanswered blows.