In case you were curious, turning 21 and moving away from home hasn’t changed Sage Northcutt one bit. He’s still as polite, respectful and positive as always.

In fact, he might actually be more positive now that he’s taken up residence in Sacramento and started training with the elite squad of lighter weight class standouts at Team Alpha Male. 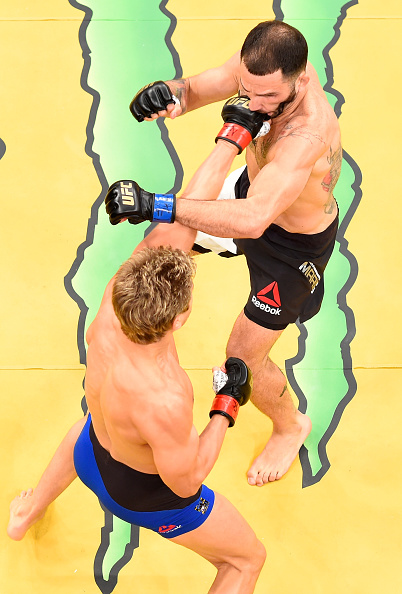 Enrique Marin of Spain in their lightweight bout during the UFC 200 event at T-Mobile Arena on July 9, 2016 in Las Vegas, NV (Photo by Josh Hedges/Zuffa LLC)" align="left" />“It’s so awesome,” he says of working with his new team. "I’ve been up here for the past two months straight and it’s been amazing because the atmosphere is so positive, so happy and everyone just puts 100 percent effort in the whole time and you’re training with everyone that is so talented.”

Impossible as this may sound, you can almost hear Northcutt smiling through the phone, the genuine excitement and appreciation he feels for getting to learn from the host of talented competitors and coaches at the Sacramento fight camp clear in his voice.

“You have to have people that push you and make you better and you have to have people that are willing to put in the time with you too,” he adds. “I have Mr. Faber – Urijah Faber, who is in the UFC Hall of Fame – who is so incredible, so talented and he’s been working with me pretty much every single day that I’ve been here, helping me out, pairing me with the right guys, working on the right techniques.

“Everybody in the gym is so great that it’s improving my game every single day.”

Northcutt arrived in the UFC with a splash.

The Katy, Texas resident was a late addition to the UFC 192 fight card in Houston, where he took part in the open workouts and scored a first-round stoppage win over Francisco Trevino in his debut. Over the next 14 months, the highly marketable prospect with the action figure physique, obvious upside and endearing personality fought four more times, alternating wins and losses.

Critics were quick to call him overhyped and question his place on the roster, refusing to give Northcutt the same leeway afforded to most raw talents because of the opportunities he was given by the promotion, as if he had a say in where his fights landed in the bout order and where he was booked to fight.

RELATED: On The Rise: Norfolk Edition

Others saw a promising athlete in need of more seasoning and a chance to spend his days logging hard hours in the gym, learning from fighters and coaches who know what it takes excel at the highest levels in the sport.

He’s found that in Sacramento and that’s why his return this weekend against Michel Quinones is such an intriguing fight.

“I like going out there and fighting a lot, kind of like Donald Cerrone, who is an amazing fighter,” says Northcutt, “but I think it was important that I had – not a break, because I’ve been training my butt off every day, but getting to make myself better in this time frame. I’ve been making myself better every day that goes by and I’m happy with it.

“I think it was super-important for me,” says Northcutt of his 11-month break between fights. “Of course, I would like to be fighting a lot more frequently than I have been, but I think it worked out how it was supposed to work out.

“I’m at the right place, training at Team Alpha Male – I’m learning at a super-fast rate and it’s been able to help me improve. Every single day and week and month that goes by, I’m getting better and better and now that I have this fight coming up, I plan on fighting a lot more frequently and getting out there more and more.”

And those future fights – like his bout this weekend in Norfolk, Virginia – will come in the lightweight division.

After making a pair of trips north to the welterweight ranks to face Bryan Barberena and Mickey Gall, Northcutt is committed to competing in the 155-pound weight division, where he’s gone 3-0 in the UFC.

“One fight was last minute – I moved up to the weight class because my opponent broke his foot – and my last fight, I decided to go up and take a challenge against Mickey Gall, he says of his previous forays to the 170-pound weight class. “Obviously, I made a few mistakes in my fight that I can change and have improved on, but staying at 155, that’s where I’m going to be for now.

Following nearly a full year away from the cage and having relocated to the West Coast in order to further his career, what should fans expect from Northcutt when he returns to action on Saturday night?

“I’m putting everything I’ve got in the Octagon. I’m going out there to put on a great show, finish my opponent and show the fans and the people that are watching that I have improved in every facet of the game and that I’ve been getting better.”