Norman Parke: Working for the Weekend

"I said once I got the chance, I’m just grabbing it with both hands and taking it with me." - Norman Parke 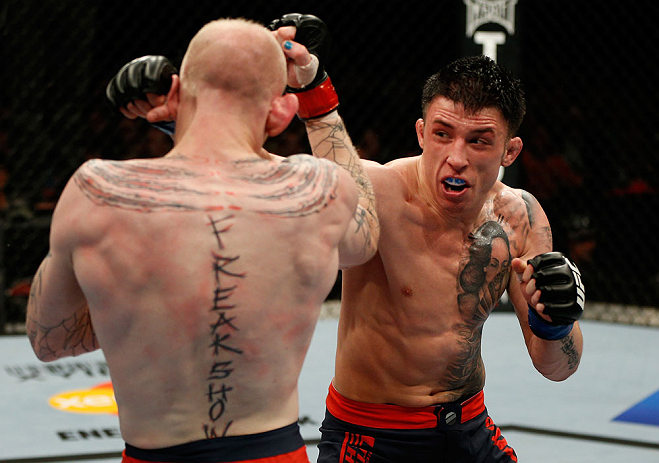 Norman Parke was like a lot of teenagers. What was going to happen five, ten, or twenty years from now didn’t really take precedence over what was going on today…or more precisely, on the weekend.

“That’s all we were doing, we were living for the weekend,” said Parke of his teen years, which he’s described as years when he was “heading nowhere.”

Eventually though, you hope that teens break out of that pattern and move on to more constructive pursuits. For Parke, that was judo, then mixed martial arts. By 19 he was fighting professionally, and after putting together a ten fight winning streak after debuting with a loss, he found a career and a different reason to live for the weekend.

“I won a lot of fights in a row, and that’s when I actually properly sat there and thought ‘I can give this a good go here,’” recalled the Bushmills, Northern Ireland native. “And since then, I haven’t looked back.”

As for the “heading nowhere” part…

“That’s all done and dusted,” he said. “I’ve been there, did that and wore the t-shirt, so I’m ready to move on with my life and just focus on my fight career.”

And what a career it’s turning out to be. Building a stellar record and reputation in Northern Ireland, Parke got his big break in 2012 when he earned a spot on the first season of The Ultimate Fighter’s Smashes series. Three wins later, the Team UK member was the winner of the show’s lightweight division, UFC contract in hand.

“Obviously all the fans that knew about the sport, they couldn’t believe it,” said Parke of the reaction to his TUF win. “I even shocked myself because of all the stuff I’ve been through six, seven years ago, and the way I kinda grew up. I never ever thought I would be doing this and that my life would change completely. It felt so surreal. I was stuck in this big bubble and then I came back home and it never ever popped. But then it started to wear off after a while and I knew where I was and I knew this was where I belonged.”

Humble to a fault, the 26-year-old Parke certainly belongs here, and his eight fight winning streak leading up to Saturday’s UFC 162 bout against Kazuki Tokudome shows him to be in ever improving form. But as successful as he’s been as of late, at the UFC level any additional help is welcome, and Parke sought it out in the United States with San Diego’s Alliance MMA team, where he has been working since winning the TUF Smashes final against Colin Fletcher last December.

“When I started martial arts, I always had this dream that one day I’d be in America and fighting,” said Parke. “That was a dream from the very start, and then it became more of a reality because I won The Ultimate Fighter and I had the money to be able to come over and train. And then when I met (Team UK coach and current UFC lightweight) Ross (Pearson) through the show, when I got to the finals he said why don’t you come over and train with us for the finale? You’ll like it in San Diego, it’s beautiful weather and you’ll love the training. So I kind of had it in the back of my head that I would go there, but I never came over because I thought that Colin (Fletcher) would be training in San Diego, so I stayed back home, trained there, and said that definitely for the next fight I’m definitely going out to America.”

That next fight was scheduled to be in April against Jon Tuck, but a late injury to Tuck forced his withdrawal, and with too little time to secure a suitable replacement, Parke was sidelined until Saturday’s bout with Tokudome. No worries for the Irishman though, as he’s had even more time to sharpen his tools with the Alliance squad.

“Here at Alliance, it’s all UFC caliber and high level,” he said. “Here, no rounds are easy at all and you can’t take your foot off the pedal. You’ve got to keep going and grind it out. And that’s making me work harder and think more and be that more precise with the shots and combinations I throw, and I just love it. If I can train here for a few years, my game’s just gonna go straight through the roof.”

Sounds like a young man with a future that takes place well beyond the weekend. He may not have thought so as a teenager, but things have changed considerably since then.

“It (making it to the UFC) shows you that it doesn’t matter where you’re from at all,” said Parke. “You could be in the smallest country in the whole world, and there’s always somebody that could be naturally gifted at something. I can guarantee that there are probably thousands of fighters in this world that have just never been discovered. It’s about people getting their opportunities and their chance to shine. There are a lot of fighters in the UK that never got their chance as well in the UFC and they’re great fighters. So I said once I got the chance, I’m just grabbing it with both hands and taking it with me.”