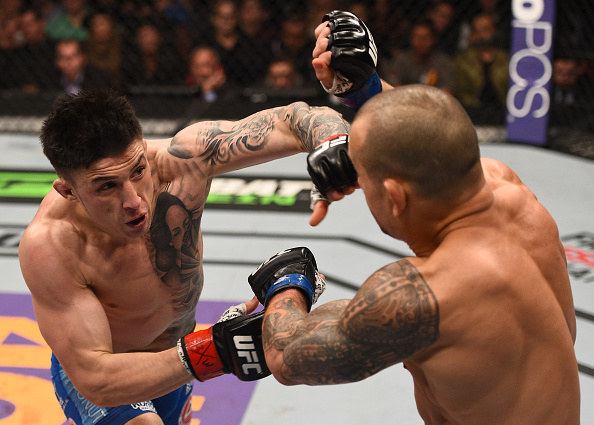 Goiania, Brazil is the latest stop on a world tour that has taken Norman Parke to the Gold Coast of Australia, Las Vegas, Boston, and Manchester, England, just to name a few.

“When we grew up you had to join the army to see the world,” Parke said, clearly pleased that he found another way to travel and experience life outside of his native Northern Ireland. So if one of the prices to pay for such a way of life is fighting the occasional hometown hero and hearing a few boos, that’s fine with him.

“If need be, I’ll play that game no problem,” he said of being the “bad guy” when he takes on Brazil’s Francisco Trinaldo this Saturday. “But I don’t mind going to fight in Brazil at all. I welcome the challenge, I like being away and getting to different countries. And this is a great sport because it gives us great opportunities to go and see the world.”

When growing up in Bushmills, Parke couldn’t have imagined that this would be his life, one where he is a top-flight lightweight on the rise in the UFC. Back in his formative years, life was a lot rougher.

“My father left us when we were pretty young, so we kind of grew up in a different way and we were always on the streets,” he recalled. “I was streetwise from a young age and I guess that transferred into the fight game. No fear basically.”

So when the phone rang, offering the 28-year-old another fight in Brazil against another hometown hero, he didn’t flash back to his controversial draw against Leonardo Santos in March of 2014; he just wanted to get back in the Octagon and put the memory of his January loss to Gleison Tibau – his first defeat since 2010 – in the rearview mirror.

Six fights into his UFC run, Parke has gone 4-1-1, and while the Tibau loss killed the momentum he had built up, the former TUF Smashes winner has shown flashes of brilliance before then, especially in his July 2014 stoppage of Japanese veteran Naoyuki Kotani. If that aggressive Parke shows up this weekend against the forward marching Trinaldo, Fight of the Night checks could be handed out, and that’s the idea.

“I’m in shape to fight,” he said. “I’m fit and I’m healthy, so I’m one hundred percent confident in what I’m a capable of doing. I know if the opportunity presents itself, I’m going to be pushing the pace and trying to finish him. I know he’s a tough lad, don’t get me wrong, but I’ve tasted defeat already and I know what it feels like, so I’m coming in there with bad intentions. That’s my frame of mind right now. I’m coming to fight, and for 15 minutes if need be because I’m not going to take my foot off the gas. I’m just gonna keep coming forward and we’re going to have a fight. There ain’t no stepping back. We’re there to fight from bell to finish and I’m not gonna stop for no one.”

If Parke does that, he expects that the result will be to his liking, simply because he believes that when you forget about game plans and strategies and just scrap, things have a way of working out.

“It’s just the way we were brought up in Northern Ireland,” he said. “We go in there and just try to get the job done. We never try to overthink anything. Our upbringing is pretty tough, so therefore it’s completely programmed in our heads that we don’t give a f**k basically. And sometimes that’s the feeling you have to have. Sometimes if you overthink things it can come and backfire on you. And I know too well in the fight game that if you don’t give a f**k and just go in there and fight, that will be your best night ever. Forget about winning or losing; just fight.”