Norman Parke: Fighting for a Finish

"I’ll be looking to put this kid away and get back to the way I used to be before I joined the UFC and finish the fight." - Norman Parke 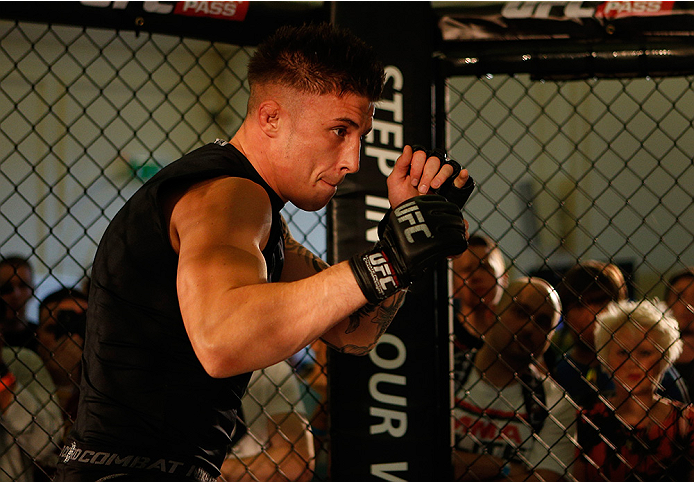 UFC lightweight Norman Parke, a self-admitted wild child as a young man, could have been a cautionary tale, if not for hearing countless tales like that in various establishments in Bushmills, Northern Ireland.

“I drank in pubs and clubs and heard the same stories every weekend,” said Parke. “This guy could have been this, he could have been that. He was a good footballer, he was a good boxer. Well, what happened? Oh, he drank too much, the drink got the better of him. You’re sitting and hearing these stories 24/7 and I said I ain’t gonna do this. So I kept chipping away and chipping away.”

First it was judo, then mixed martial arts, then The Ultimate Fighter, and finally his latest destination, as a top 155-pound prospect in the leading organization in the sport, the UFC.

Who said you never learn anything useful while sitting on a barstool?

“I think about it every day and I’m just grateful I’m actually doing something I love, something I’m very passionate about,” he said. “Some people wake up to go to their job every day and they’re just miserable – you can’t even look at them - and when you’re around those people it puts you in a bad mood. So I tell these people go find something you love. I found a hobby I loved, and MMA was a hobby for me. It wasn’t my first sport; it was just my second hobby. But then I kept at it and improved.”

Now he’s only one of a handful of people on the planet who can do what he does at the level he does it at. That’s pretty heady stuff for anyone, but the 27-year-old takes it all in stride, focusing not on the perks of the job, but the job itself. That’s precisely why Parke won the TUF Smashes series, and as he enters his Saturday matchup with returning Japanese veteran Naoyuki Kotani, he does so with a 10-fight unbeaten streak that includes three UFC victories.

Despite all this, he knows that fighting in Dublin is a perk, and it is one he’s embracing fully.

“It’s unbelievable,” he said. “It’s been something the fans have been looking forward to for the last five years, so it’s going to be a great night for Ireland. The people here are very passionate about the sport of mixed martial arts, and sports in general.”

The bout is Parke’s first in Ireland since a 2012 win over Stephen Coll in Donegal, a fight which was his last before heading off to the TUF Smashes house where he made his name on the international scene and won a UFC contract. So you would imagine that there’s a lot of weight on the shoulders of “Stormin’ Norman” to show Irish fans just how far he’s come in the last two years. He says there isn’t.

“I feel no pressure at all anytime I fight,” said Parke, a pro since 2006. “A lot of fighters over think things and they let the hype get to them, but it’s just a fight to me and I treat this just like any other fight. The most important thing with me and the only thing I’m battling with myself is trying to get the finish. I’ll be looking to put this kid away and get back to the way I used to be before I joined the UFC and finish the fight.”

Parke’s last five fights, dating back to his Smashes semifinal win over Brendan Loughnane, have gone the distance, and though he didn’t lose any of those fights, he would love to return to the days when he finished 15 of his first 16 wins.

Kotani, winner of 16 of 19 since his last UFC appearance in 2007, isn’t exactly the guy you would want to bet on finishing, and if Parke can stop or submit the veteran, it would be a significant feather in his cap, but one that may not translate to casual fans who see Kotani as a newcomer, not one of the most respected fighters on the Japanese MMA scene.

“Even though he’s been fighting in Japan and people are saying he’s fought nobodies, there are loads of great fighters that aren’t even in the UFC that are from the Asian scene,’ said Parke. “I guarantee there’s another GSP (Georges St-Pierre) or another Anderson Silva somewhere out there that has never been found. So I’m taking him seriously and I don’t care what people say. The true hardcore MMA fans know who he is, I know who he is, he’s been there before, he’s experienced, and he’s the most experienced fighter on the card, so it’s a tough matchup for me.”

Tough, but winnable, and Parke has every intention of not just picking up the W, but doing it in a way UFC fans have yet to see from him.

“He’s a crafty fighter, so I have to make sure I’m on my game, play it smart, and use my strengths against his weaknesses and I feel like I’ve got the ability to knock him out.”