Norma Dumont Ready For Anything

Norma Dumont has settled into life in Las Vegas and life in the featherweight division, and this weekend, the Brazilian talent has a chance to establish herself as the top contender in the 145-pound weight class as she takes on Aspen Ladd in the main event of Saturday’s fight card at the UFC APEX.

“First of all, the physical part has been a blessing to me,” Dumont began, explaining the benefits of relocating to the dessert and training at Syndicate MMA, where there are a host of established, talented female competitors for her to work with on a regular basis. “And the high-level wrestling I get to train here, which I do not have access to in Brazil — both of these parts of my training have really improved my game and have been a blessing to me.”

While settling into her new environs in Las Vegas has been a relatively smooth process, feeling comfortable competing at featherweight has taken a little more time and little more getting used to for Dumont.

A black belt in Sanda and a brown belt in Brazilian jiu jitsu, the 31-year-old made her UFC debut in February 2020, suffering a first-round knockout loss to Megan Anderson in a featherweight contest in Norfolk, Virginia. She looked out-sized against the towering Australian, who would fight for the title a year later in her next fight, and opted to move down to bantamweight for her next fight, only to miss the 136-pound limit by a considerable margin.

The fight proceeded as a catchweight engagement, with Dumont earning a unanimous decision win over Ashlee Evans-Smith, but when she again failed to make weight for a bout against short-notice replacement Erin Blanchfield in April, the UFC neophyte moved back up to featherweight. Six weeks later, Dumont filled in for Danyelle Wolff opposite former title challenger Felicia Spencer, turning in a quality effort against the game Canadian while landing on the happy side of a split decision verdict.

“It was a very good test with Felicia — she’s a top-ranked athlete — and it showed me that I could fight among the top athletes in the UFC too,” said Dumont, who pushed her record to 6-1 with her victory in May. “It gives me a lot of confidence and I feel comfortable at 145.

“A win over someone like Felicia makes me confident I can fight anybody in that weight division in the UFC.”

Initially slated to face former bantamweight champ and two-time featherweight title challenger Holly Holm in the co-main event of this weekend’s fight card, the pair was elevated to top spot on the marquee when Miesha Tate was forced out of her clash with Ketlen Vieira.

Then last week, Holm announced she’d suffered a knee injury and would be unable to compete, leaving Dumont momentarily without a dance partner.

Two weeks after failing to make weight for her highly anticipated clash with Macy Chiasson at bantamweight, the 26-year-old Ladd steps in for Holm in her first foray in to the featherweight ranks; a division many have long viewed as the best destination for the talented Northern California native who has struggled to make the 135-pound weight limit throughout her UFC career.

While not the matchup she was originally preparing for, Dumont remains excited to step into the Octagon this weekend and test herself against Ladd.

“I knew a lot about Aspen; I study all my possible opponents,” said the Brazilian standout when asked about her new American opponent. “A fight with Holly might have projected my name more, but I think Aspen, because she comes to fight, it’s going to be a lot more fun and everybody is going to gain from that.”

Despite the short-notice nature of the pairing, it still carries potential championship ramifications in the shallow featherweight ranks.

With champion Amanda Nunes set to defend her bantamweight title in December, having already beaten Holm, Spencer, and Anderson, it’s not inconceivable that the winner of Saturday night’s main event moves to the front of the line to challenge “The Lioness” whenever she’s ready to defend her featherweight title next.

It’s not the typical path a contender travels to a championship opportunity — a couple fights and a couple wins, capped by a victory over a divisional newcomer — but Ladd isn’t your run of the mill new arrival.

While this is her first appearance in the 145-pound weight class, Ladd has been viewed as a championship-level talent throughout her career, and enters the Octagon with a 9-1 record overall, including a pair of wins over Sijara Eubanks, and stoppage victories over Lina Lansberg, Tonya Evinger, and Yana Kunitskaya. 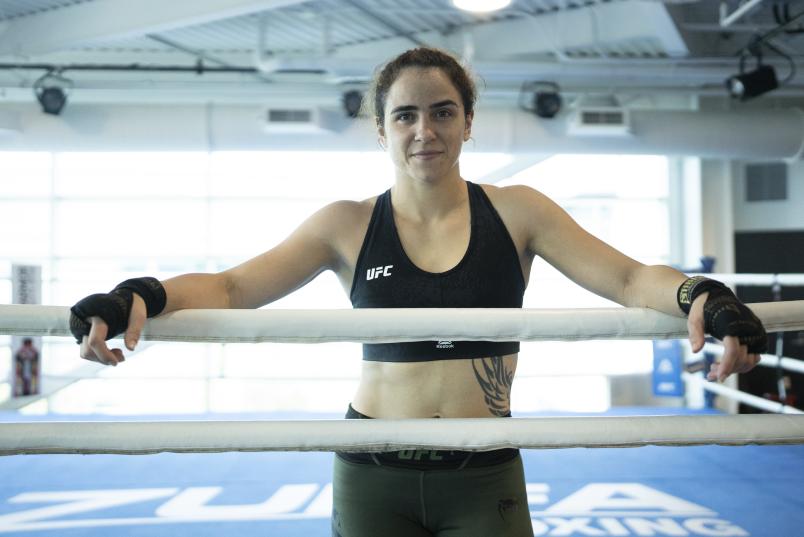 As much as her missing weight earlier this month forced the cancellation of an intriguing clash and potentially simmering feud, it also opened the door to a move up to the featherweight division, where the road to title contention is shorter and Ladd just might be a better fit long term.

Ladd is an elite talent, whose only loss came against inaugural featherweight champ Germaine de Randamie, and a dominant performance against her this weekend is the kind of effort that would make it very difficult to deny Dumont an even greater opportunity next time out.

“I believe so,” she said when asked if a victory this weekend puts her at the top of the list of contenders in the 145-pound weight class. “Of course, Holly Holm is a bigger name, but she is ranked No. 3.

“I think a dominant victory over Aspen is what I need to gain that position. She comes to fight, so that will make this the type of fight I like, and that will make for a really fun fight that I hope all the fans like.

“I think a good win over her should put me in title contention,” she said again, reiterating her position. “At least that’s my hope, but we’ll have to see what the UFC thinks.”