Nolan Ticman: Not Just Another Fight 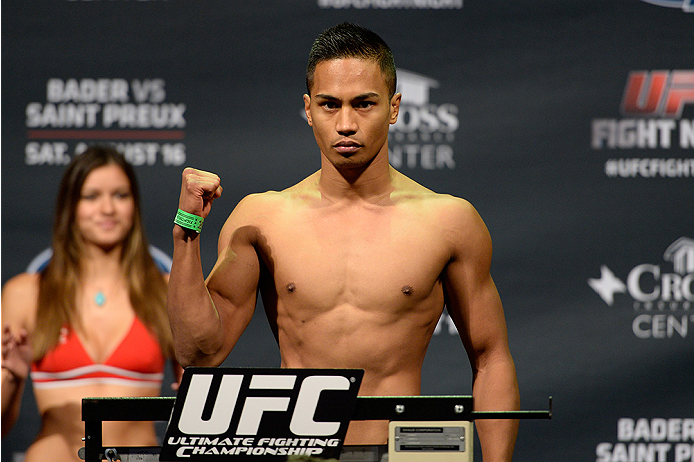 Nolan Ticman heard the rumors, and as a Filipino-American member of the UFC roster, there was no question that when the Octagon landed in Manila, he wanted to be there.

The only problem was that after being out of action since last August, when he lost his short notice UFC debut to Frankie Saenz, fighting was more important than fighting in the Philippines.

“I heard through the grapevine that the UFC was going to be coming to the Philippines, but I didn’t know when, and I really wanted to get back in the cage around May or June,” he said. “I was just thinking to myself, if this card is announced for May or June, I’m going to go for it for sure. But if it’s going to be pushed to later on in the year, then I have to take a fight prior to that.”

It wasn’t happening later in 2015. It was happening on May 16, lining up perfectly with the schedule Ticman wanted to keep. He called his manager immediately.

Three days later, he got a two-word response that spoke volumes.

This Saturday, the 26-year-old from Huntington Beach will be in a fight that all at once will be the most important, exciting and emotional one of his career, and it has nothing to do with the opponent he will be facing, Yao Zhikui, but where he’s going to be fighting it. And he’s doing his best to keep it all in perspective.

“As great and amazing as this is, I still have to keep focused,” he said. “And first thing first is that I have to fight.”

That means no extended visits with his extended family, no long trips to embrace the culture of the Philippines; just business. But the Ticman clan will be out in full force come Saturday night, and he can’t wait.

“From what I’m hearing, they’re coming by the busload,” he said when asked if his family members will be in attendance this weekend. “There’s even family I don’t even know directly, but we’re all related. My close family members out there, they actually live around the arena. I hardly get to see them – I saw them only one time as an adult a year and a half ago – and to see them so quick, and with me in the UFC, it’s crazy.

But back to the actual fight, Ticman does have some pressure on him to not just perform, but win, in his second Octagon appearance. Now competing at 125 pounds, the Californian will likely avoid getting outwrestled by stronger foes like he was against Saenz, and as he points out, moving to flyweight was always the plan once he got signed to the big show.

“I fought at 135 pretty much all my career, and we understood that I was a middle to lower-sized bantamweight compared to guys like (Renan) Barao,” he said. “So that was always the plan to make that cut when I got into the big leagues.”

And once he was signed, expectations were high, despite his relative lack of pro experience (he was 4-1 as a pro when he made his UFC debut). Ticman is a black belt in Muay Thai, a brown belt in Jiu-Jitsu, and he has the seal of approval from respected coach Rafael Cordeiro. His training partners, including UFC lightweight champion Rafael dos Anjos and rising 155-pound star Beneil Dariush, aren’t too shabby either, and it’s been through his fight week trips with the two UFC standouts that he’s been able to prepare for an atmosphere that may be equivalent to a world title fight in Manila.

“I’ve been in their corners, I’ve gone on the trips with them, I’ve experienced it one time for myself, and I resort back to those times and visualize the cage, fight week itself, the environment, and I’m going to be much more prepared and focused,” he said when asked if he’s visualized this Saturday night. “That’s going to be the difference here. Once the fight’s over, once I get my hand raised, all the built-up emotions can come out, but I can’t predict what that’s going to be like.”

What he can predict is that he will show a different fighter than what he was in Maine last year.

“I just have to apply what I know I can do in the cage,” he said. “I have 15 minutes to do it, I have an explosive, aggressive style, and my influences are Master Rafael and Wanderlei Silva; that’s how I like to attack. But at the same time, I’m taking some other techniques and trying to really hone my skills.”

Bottom line, Nolan Ticman is going to entertain in Manila.

“I know once the punches and the kicks start flying, it’s gonna look good.”